Some of the moments that occurred for the first time in a World Cup.

Australia were crowned World Champions once again after a one-sided affair in ICC Cricket World Cup 2015 final at Melbourne Cricket Ground (MCG). Pramod Ananth looks back at some of the moments that occurred for the first time in a World Cup.

Kumar Sangakkara’s four consecutive centuries: Sangakkara registered four back-to-back centuries, which lit up the ICC Cricket World Cup 2015. Sangakkara had an ordinary beginning to ICC Cricket World Cup 2015 with scores of 39 and seven in the first two matches against New Zealand and Afghanistan respectively. One could sense that a big score is just around the corner. In the Pool A match against Bangladesh, Sangakkara remained unbeaten on 105 off just 76 deliveries, which also included a 210 second-wicket partnership with Tillakaratne Dilshan.

Sangakkara’s next century came against England at Wellington. Chasing 310 for a win, Sangakkara slammed an unbeaten 86-ball 117 to guide Sri Lanka home by nine wickets. His next century came against the mighty Aussies at Sydney. Sri Lanka needed a mammoth 377 to win, Sangakkara, coming in at No. 3 once again scored 104 off 107 deliveries, which kept Sri Lanka in the hunt momentarily. But he could not get Sri Lanka over the line this time. ICC Cricket World Cup 2015: Top 10 spells

His last of the four centuries came against Scotland at Hobart. He built yet another sparkling partnership with Dilshan at the top and finished with 124 off just 95 deliveries, which helped Sri Lanka win by 148 runs.

Sangakkara’s feat is not only a World Cup record, but an One-Day International (ODI) record as well.

Mahmudullah, first Bangladesh player to score a century in World Cups: Bangladesh found a new star in their ranks by the name of Mahmudullah.  The right-handed batsman scored Bangladesh’s first-ever century in a World Cup, against England at Adelaide. His 138-ball 103 helped Bangladesh set their opponents a healthy target of 276. England fell 15 runs short and Bangladesh made it to the knockout stages of a World Cup for the first time. Mahmudullah managed to score another century in his team’s next match against co-hosts New Zealand at Hamilton. However his knock of 128 was not enough to help his team avoid defeat. Top 10 bowlers in ICC Cricket World Cup 2015

Afghanistan register maiden World Cup win: Debutants Afghanistan registered their first-ever win in a World Cup in a match against Scotland. Chasing 211 to win, Afghanistan started losing wickets at regular intervals and found themselves in deep trouble after they were reduced to 97 for seven. Samiullah Shenwari then made a match-winning 96, to help Afghanistan win by a wicket in a nail-biting finish. The entire nation must have surely been overjoyed by their cricket team’s effort. Top 10 batsmen in ICC Cricket World Cup 2015

Two World Cup double centuries: For the first time ever, two double tons were recorded at a World Cup. The first one came off the bat of Chris Gayle, who scored 215 of 147 deliveries against Zimbabwe in a Pool B fixture at Canberra. The Jamaican equalled Rohit Sharma’s record of scoring most number of sixes in an ODI innings (16) along the way. Read: Australia beat New Zealand in ICC Cricket World Cup 2015 Final, win World Cup for fifth time

The second one, and probably the best double century of the five scored so far was scored by New Zealand opening batsman Martin Guptill in the quarter-final stage at Wellington. Guptill carried his bat through the innings with 24 fours and 11 sixes punctuating his innings, including a hit that landed the ball on the roof of the Westpac stadium.

Three 400-plus scores: Three scores over 400 were registered for the first time at a World Cup, with South Africa achieving this feat in two continuous matches. South Africa achieved scores of 408 for five and 411 for four in back-to-back matches against West Indies and Ireland respectively. South Africa skipper AB de Villiers’ 66-ball 162 tore apart West Indies’ bowling attack, while centuries from Hashim Amla and Faf du Plessis got South Africa to a humongous total against Ireland. The Proteas won both matches comfortably. ICC Cricket World Cup 2015: The CricketCountry XI

David Warner’s career best 178 and some hard-hitting by Glenn Maxwell down the order got Australia to 417 for six in a Pool A match against minnows Afghanistan, that saw Australia win by a mammoth 275 runs. Afghanistan could only manage 142 and lost the match by 275 runs. Australia’s score was the highest by them playing at home.

First century by a United Arab Emirates (UAE) player: Shaiman Anwar became the first UAE player to score a century at a World Cup. He scored a 83-ball 106, which propelled his team to 278 for nine in 50 overs in a Pool B fixture against Ireland at Brisbane. His brilliant century unfortunately went in vain as Ireland win the thrilling contest by three wickets with four balls to spare. Cricket World Cup finals XI: Players who were outstanding on the day of finals

Bangladesh making it to the knockout stages: Bangladesh scripted history by making it to the knockout stages for the first time in history. Wins against Ireland, England, Zimbabwe and a point due to a wash out against Australia got Bangladesh to the quarter-final stages. They reached the super eight stage in the 2007 World Cup, beating India in the group stage but never made it to the quarter-finals from there. This performance is certainly a major boost for the nation.

South Africa win their first knock out game: South Africa earned the tag “chokers” due to their inability to win a single knockout match in World Cups. They managed to end the run by defeating Sri Lanka in the first quarter-final at Sydney. South Africa won the match comfortably by nine wickets, but lost to co-hosts and tournament favourites New Zealand in the semi-finals at Auckland to crash out of the tournament.

Australia become first team to win in five continents: Australia’s win at Melbourne was the fifth continent in which Australia have lifted the World Cup. Their other four World Cup triumphs came in India (Asia), England (Europe), South Africa (Africa) and West Indies (North America). Australia also became only the second team after India to win the World Cup at home. Michael Clarke retires from ODIs: Battered, bruised but not beaten

Brendon McCullum registers 50-plus score with strike rate of over 300: New Zealand captain McCullum was in excellent touch against England in a Pool A fixture at Wellington. Needing a meek 124 to win, McCullum tore the English bowling apart right from the beginning. He reached his half-century off just 18 deliveries and eventually finished his innings at 77 off just 25 deliveries, with a strike rate of 308. This is the first time in a World Cup that a player has ended his innings with a strike rate in excess of 300 after scoring 50 or more runs.

Brendon McCullum became the first captain to score a duck in World Cup final: Brendon McCullum, who was in tremendous form going into the final at Melbourne, failed to put bat on ball and was dismissed in the fifth ball of the New Zealand innings for a three-ball duck. New Zealand were then bundled out for 183 and lost the match by seven wickets, giving Australia their fifth World Cup title. 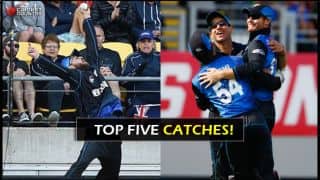