On September 13, 2013, Shanthakumaran Sreesanth — the talented fast bowler was handed a life ban by the Board of Control for Cricket in India (BCCI) for his alleged role in the Indian Premier League (IPL), 2013 spot-fixing controversy. Sadly, the cricket world will no longer see Sreesanth  — whose upright seam  and a natural outswinger would make any fast bowler envious. Sarang Bhalerao looks at Sreesanth’s cricketing career. 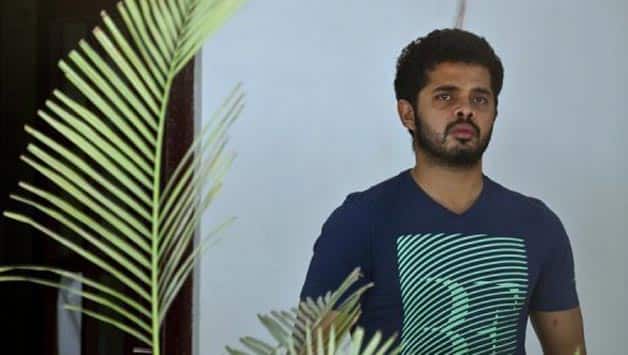 On September 13, 2013, Shanthakumaran Sreesanth — the talented fast bowler was handed a life ban by the Board of Control for Cricket in India (BCCI) for his alleged role in the Indian Premier League (IPL), 2013 spot-fixing controversy. Sadly, the cricket world will no longer see Sreesanth  — whose upright seam  and a natural outswinger would make any fast bowler envious. Sarang Bhalerao looks at Sreesanth’s cricketing career.
This fast bowler bowled magical deliveries and  delivered match-winning spells. He had the propensity to swing the ball prodigiously from around leg-stump and hit the top of off. The action was smooth and the seam position was upright with the wrist absolutely straight at the point of release. But, sadly this rare cricketing acumen won’t be seen anymore. Welcome to the world of Shanthakumaran Sreesanth — where distractions and inexplicable antics overshadow his precocious talent. And the life ban handed to him by BCCI for his role in IPL 2013 spot-fixing controversy is the final nail in the coffin for his cricketing aspirations. It is indeed a massive loss for Indian cricket.

Talk about Sreesanth and one instantly thinks about his antics and the overboard celebrations. Remember him letting Andrew Symonds know who is boss in a One-Day International (ODI) in India when the former had the latter caught and bowled. Remember the man who was intimidated by Andre Nel at Johannesburg and he responded by thumbing a six over the bowler’s head th next ball. The impromptu dance that followed had everyone in splits. Sreesanth — the dancing star — was born that day.

Although he had a tendency to live life king size, Sreesanth was forgiven  as he had the natural inclination to bowl unplayable deliveries. Remember the spell of five for 40 against South Africa at Johannesburg? The delivery to get rid of Hashim Amla was an absolute peach. It pitched around leg-stump and swung so late that the batsman edged it to the second slip — that’s the best he could do. Jacques Kallis soon followed when he got a similar delivery. The purists couldn’t find any flaw in that exhibition; the Indian team, it seemed, had unearthed a gem. Sreesanth’s career has had a peculiar graph: an unprecedented high was followed by a sullen low. He was embroiled in yet another controversy when he was allegedly slapped by the acting Mumbai Indians skipper Harbhajan Singh in an IPL match at Mohali in 2008. Sreesanth bawled like a baby  and that image made its way  on the frontpage. He got a lot of sympathy, but there were people who criticised him for his mercurial behaviour. But that was Sreesanth for you — he was always had a liking for theatrics. His reaction after getting a wicket was funny at times, mysterious at best. His silence was baffling. One celebration that stands out was when he bowled Matthew Hayden in the ICC World T20 2007 semi-final in South Africa. Sreesanth hit the pitch in disgust with both his hands before sending off Hayden. These aggressive reactions by an Indian were something new for the cricket world.

Sreesanth always loved to get under the skin of the batsman. He didn’t even spare Sachin Tendulkar during a Challenger Trophy encounter. That proved to be a futile exercise as Tendulkar smashed the Kerala speedster for two sixes. Not to mention the bad publicity he got after doing that.

Sreesanth got into a verbal altercation with Graeme Smith. He made a fool of him by meaninglessly indulging in a banal chanter. The loss of concentration might as well have played into the South African hands. MS Dhoni had had enough of the eccentricities. He would be the first person to publicly condemn such behaviour. At times he shouted at Sreesanth whose thoughts wandered away from the cricket field. Against the New Zealand in a Test match, Dhoni was upset with Sreesanth who was standing too far behind at mid-off. Dhoni’s way of confronting Sreesanth was: “Sreesanth come in the front you do not have your girlfriend behind.”

But that was Sreesanth for you. He always had a million thoughts in his head before bowling a ball. He spoke to himself, pepped himself up before every delivery and had the ability to bowl a  one that would befuddle even the greats of the game. One particular delivery which is etched in the psyche of the Indian fans is the one he bowled to Jacques Kallis at Durban. Now here was a man who had 10,000 Test runs. Sreesanth ran in and hit the deck hard to have Kallis jumping and trying hard to fend the delivery. The ball just took off and had the South African all-rounder caught at gully. These are moments worth savouring for they are so rare.

But as they say, only a diamond can cut a diamond. Sreesanth’s biggest enemy was his alter ego — the bizarre non-cricketing avatar that resided within him.

In 2010, Sreesanth’s mentor at Warwickshire, Allan Donald told The Telegraph after his match-winning performance against South Africa: “Sreesanth’s always had the talent; it’s just that he appeared to have distractions, too… Whenever we’ve had a chat, I’ve told him that the ability he has must be translated into wickets… He’s begun to do that… He’s got to remember that it’s up to him alone to realise his potential.” In hindsight, we realise that Donald was spot on. Now the question is did the BCCI fail to channelize his potential in the right direction? Or was there always an inherent flaw in the talented fast bowler.

The intriguing aspect was that Sreesanth allegedly sold his soul for a mere Rs 40 lakh. Now as  former Indian skipper Sourav Ganguly pointed out that if Sreesanth wanted to make money he should have done that with his performances rather than embracing the shortcut. Ganguly told the Times of India, “For me, Sreesanth is an absolute waste of talent. When you are gifted with so much talent and you don’t use it, it’s pointless. What will you do for 40 lakh? It’s just one Test series for him. If you get 20 wickets in three Test matches, you get double the money. If he does well in one season of IPL, he gets 10 times the money. I don’t know whether he has done it or not. I don’t have any proof, but whatever I have heard on TV, if he has done it, it’s absolute stupidity.” He was also lucky to be part of India’s biggest triumphs — two World Cup wins — 2007 and 2011. And he earned a lot of money being a part of India’s watershed moments. It seems it is all over.

Sreesanth won only 27 Test caps and took  87 scalps. The question remains: “What if Sreesanth’s aim on the cricket field was only to bowl conventional outswingers sans any distractions?” The results would have been surely different. He would have been, I dare say, the first choice bowler in any series.

If he introspects his cricketing career maybe a thought will  come to him that he owed something to the country: a country where genuine fast bowlers are a rare breed. He could have walked into the pantheons of India’s cricketing greats. Maybe he himself squandered the entry into the elite league.

What a bad miss!

Asian Cricket Council meeting to be held in Chennai; India could propose tri-series in December