Since his 99th international hundred, Tendulkar has had to bear an enormous amount of pressure - a fact made very clear by his emotional words on achieving the milestone. The levels of expectation hit the roof and there was no escape for the great man from all the hype and anticipation. 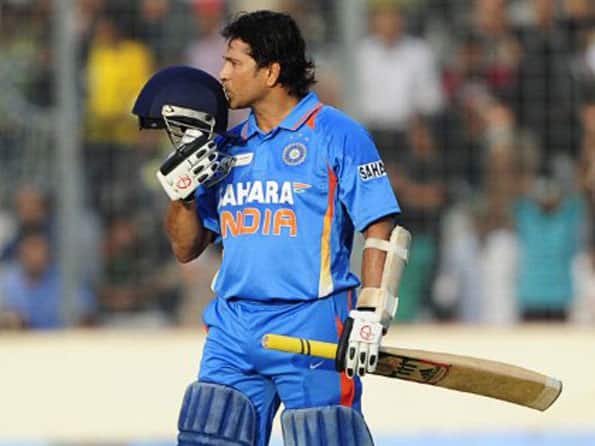 Before cynics accuse Sachin Tendulkar of scoring hundreds when India loses, they would do well to get their facts right. No other batsman in world cricket has scored 33 ODI hundreds and Tendulkar has scored them in winning causes alone! © AFP

Wherever I went, the restaurant, room service, everyone was talking about the 100th hundred. Nobody talked about my 99 hundreds – Sachin Tendulkar, on reaching his 100th international hundred.
—

Since his 99th international hundred, Sachin Tendulkar has had to bear an enormous amount of pressure – a fact made very clear by his emotional words on achieving the milestone. The levels of expectation hit the roof and there was no escape for the great man from all the hype and anticipation. One dare say that it would have been a huge sense of relief when the monkey was finally off his back.

The historic landmark of 100 international hundreds against Bangladesh was almost anti-climatic. It wasn’t a high-octane clash against Pakistan, nor was it a game on his home ground at Mumbai or in the marquee Test series against England or Australia. The milestone was ultimately achieved in a much quieter setup at Dhaka; against the most unexpected opponent. There was no hype, nor exaggerated build-up – a huge contrast from almost all the international games he has played over the last year.

The ultimate result of the game was a huge embarrassment for India as they failed to defend 290 against the unfancied Bangladesh. With this unexpected result, cynics would come out in numbers to belittle the master and suggest that his hundreds do not win games for India.

However, stats would tell a contrasting story and crush the baseless claims of the sceptics.

In Test matches, Tendulkar has scored 51 tons, out of which India have been triumphant on 20 occasions and have borne the brunt of defeat 11 times. The remaining tons came in drawn games. Some of the hundreds in drawn games have been absolute masterpieces and have saved India from the dumps. For example, his first hundred at Manchester in 1990, 146 against South Africa in 2011, 100 vs Sri Lanka at Ahmedabad in 2009, to name a few.

When it comes to One-Day Internationals (ODIs), Tendulkar pushed his tally to 49 with his latest ton againstBangladesh. Fourteen of them have come in matches where India could not get across the finishing line. One was scored in a washed out game at Durham against England and one was in the infamous tie against the same opponents during the last World Cup. That leaves us with a mindboggling 33 victorious efforts.

No other batsman in world cricket has scored 33 ODI hundreds and Tendulkar has scored them in winning causes alone! The batsman with the most hundreds in ODIs after Tendulkar is Ricky Ponting, who has 30 to his name – three short of Tendulkar’s successful tons!

The Bangladesh batsmen were absolutely brilliant, but were helped by some ordinary bowling. Instances like these that hurt Tendulkar’s reputation as a match-winner as the others in the team put in mediocre performances to nullify all the hard work done by him. The Indian bowlers have done a great disservice as their shoddy performance took the sheen off what is amongst the biggest moments in cricket history, let alone Tendulkar’s career.

There may be a few murmurs regarding Tendulkar taking it a little slow during his innings, but one mustn’t forget that the wicket was very slow and the ball didn’t come on to the bat all that well. Furthermore, 290 was no small total and could have been defended with a disciplined effort. Indian bowlers kept things tight early on and were in control until the 37th over when Shakib Al Hasan decided to give it a whack. From the sublime performance against the Sri Lankans the other day, to the ridiculous outing against Bangladesh, the Indian bowling has come a full circle.

The bowling at the death was horrific to say the least as the batsmen were given ample opportunities to score. What was astonishing was that bowlers like Irfan Pathan, Ashok Dinda and Praveen Kumar delivered juicy full-tosses and length deliveries at critical stages. Pathan’s freebies in the 48th over tilted the match irrevocably in Bangladesh’s favour, and the penultimate over of the innings bowled by Praveen was the coup de grace for India.

This defeat just typified the instances when Tendulkar has put in marvelous efforts and yet found himself at the wrong end of the spectrum. Who can forget the agony of Chennai 1999 and Hyderabad 2009? Even has his teammates faltered, Tendulkar waged a war all by himself to keep India alive. Had he received a little more support, those knocks would have been momentous and etched in the history of cricket.

Tendulkar’s current phase is similar to what he experienced from 2004 to 2006. In the said time period, he had scored four brilliant ODI hundreds – all in losing causes. Even then, the jury was out with its verdict that Indiadoesn’t win when he scores tons. However, all that changed in early 2007 as his hundred against the West Indies at Vadodra helped India to a comfortable win.

Tendulkar’s unfortunate tryst teaches us the most basic lesson about the game. At the end of the day, cricket is a team sport and the others in the eleven need to play pivotal roles in helping the team cross the line. A batsman can make his contributions from one end, but he needs at least a semblance of support at the other. Similarly, if a batsman helps set up a good target for the other side, the onus is on the bowlers to seal the deal. Keeping this in perspective, it is unfair to blame Tendulkar for India’s defeat – something that could have been avoided with a polished bowling effort.

Most importantly, the man has scored 100 international hundreds and by the law of averages, there are bound to be unwanted results. The sheer number of hundreds he has scored is immense and it is logical that a few which have come in losing causes would be a significant number.

I am Sachin Tendulkar, not God: says Master Blaster after scoring 100th ton