Cricket is a team sport and also an individual sport at the same time. As much as a collective effort drives the team to win matches, sometimes it’s  performances by one single player that can turn the course  of a Test match. It’s like a dual nature of light, particle and wave at the same time. An individual performance can trigger a wave of chain reaction among teammates and literally lift the spirits. The converse is also true no matter how well the team is doing if you don’t come up with big performances time and again; the player’s spot is always under the scanner. A player is always judged by his most recent performance – be it good or bad.

Cricket is a game of numbers and if you are a batsman especially at the top of the order, -the the one barometer that would be used is of the number of centuries scored, especially in Tests. Test matches are won by big hundreds and 5-fors, be it an international or even a domestic game, it’s these marathon efforts that seal the deal for a team. Hundreds take the game away from the opposition; it destroys the confidence of the bowlers. Batsmen are rightly classified by the number of centuries they score and also the frequency. At times when a player comes close to it and doesn’t cross this line, it’s he who loses out and not the team. Statically it’s a number, but an important one. Ravindra Jadeja is still held high as a batsman in Test cricket because he has scored big hundreds in the domestic circuit, playing for the same team as Cheteshwar Pujara.

A batsman scoring a 99 not out compared to  him getting out on 100, like what Steven Smith managed in the first Test at Centurion is a perfect example. In future, when he is out of form and his spot in the team is under scrutiny, it’s the century’s column and the last century time stamp that would come to his rescue.  You take care of it and rest assured that it would take care of you.

What would Sachin Tendulkar, Rahul Dravid, Ricky Ponting, Jacques Kallis and others be without those hundreds and double hundreds? Along with their run aggregates, it’s the stats column that separates them from the rest. Test hundreds is epidemic to a batsman, he scores one, and it triggers chain reaction.

Example to put in perspective:

In the Durban Test against South Africa, Ajinkya Rahane (96) and Murali Vijay (97) came close to achieving the milestone; India had virtually lost the game after the hosts had gained a 170-run lead in second innings. Along with the team’s loss, it was Rahane and Vijay who also lost the opportunity of having a three-figure score in the game. Years from now, not many would remember how well Vijay played Dale Steyn on the first morning of a Test match or how well did Rahane stitch the team together in the 2nd innings. But when their place in the team is under scanner, these might not work in their favor. As brutal it might sound, cricket is a game of numbers. Test matches are not well spread in the schedule; you have bunch of them crammed together and then a void and then another bunch. So when offered an opportunity, it needs to be grabbed with both hands.

Circa 2004-2005, Aakash Chopra was instrumental in India’s overseas victories against England and Australia, who with Virender Sehwag formed a formidable opening combo. Sehwag’s attack was well-complimented by Chopra’s solid defense and it infused a sense of calmness in the team. He played the age-old ‘knocking the shine off the ball’ game, the traditional way by wearing down the patience of the bowlers thereby allowing Sehwag to play his shots. Unfortunately, very little is talked about him. Chopra did everything for the team, but nothing for himself in the centuries or 50s column. He often got out in 40s, which were good enough at that point, but it failed to hold his position in the team. His stats say 10 Tests and two 50s, which sound very poor for an opener, but it doesn’t undermine his herculean efforts. Another such case was that of Sanjay Bangar.

In the first Test match in Auckland against New Zealand, though India lost the match, it was Shikhar Dhawan who won his battle; he was praised for his belligerence, patience and career defining fourth innings hundred, but doubt if the same level of euphemism would have existed had he got out in the 90s. When Gautam Gambhir was dropped from the Indian side after the home series against England, his statistics simply read last hundred scored in January 2010, though he had 11 half-centuries during that period. His inability to score a century caused his downfall, and same was the case with Sehwag.

One wonders if the England and Wales Cricket Board (ECB) would have thought of dropping Kevin Pietersen, had he scored a hundred in the Ashes. Pietersen scored his last Test century in August 2013.

Alex Doolan had a brilliant debut not just numbers wise, but he looked a good and calm player when at the crease, which is very important for a No 3. Watson will be ready for comeback in sometime and the Australians will now face the dilemma over these two. Wonder if that decision would have been easy had Doolan scored a hundred instead of 89. 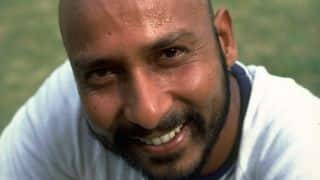