While Sachin Tendulkar’s cricketing exploits for Sharadashram Vidyamandir are well-known, there is a little-known teacher in Bandra, who was one of the first to see the maestro take baby steps towards greatness. While Sachin Tendulkar’s cricketing exploits for Sharadashram Vidyamandir are well-known, there is a little-known teacher in Bandra, who was one of the first to see the maestro take baby steps towards greatness.

Seventy-year-old Jyotsna Telang appears quiet and reclusive. But talk about her favourite student, and her heart swells with pride. Telang recalls that after finishing his tuition classes, Tendulkar — who was just six-years-old then — used to play cricket with elders in MIG (Middle Income Group) Colony. And whenever they asked him to fetch drinking water, “Sachin would happily take bottles from my fridge”.

Telang used to run tuition classes from her MIG Colony flat. At that time, Sachin was a Std I student of New English School, Bandra (East).

The Tendulkars, who used to live in Sahitya Sahwas Colony, had learnt about Telang’s classes and got their young son admitted there. “Sachin’s family used to pay Rs 50 per month as tuition fee,” Telang remembers, adding that the cricketer was her student till Std IV.

“He was a very happy-go-lucky student and regularly attended my classes,” Telang says.

“However, right from childhood, he was obsessed with cricket.”

Telang adds she had no idea her pupil would go on and become so famous. “Sachin’s parents father Ramesh and mother Rajni were like family to me. My son Amol and Sachin went to the same school. Every evening, they had classes till seven o’clock. And whenever any guest arrived, the two boys would sneak out and either talk about cricket or play the game. It was a small class with only a handful of students,” Telang recollects.

Revealing the sensitive side of the Master Blaster, Telang says that he was fond of his sister Savita and after she got married “he often asked me ‘Mavashi, why did Savita leave my house and go to her husband’s?’”

“He was very touchy about his sister. He was in fourth standard at that time,” Telang says, adding that even at that young age Sachin was quite a foodie and used to gorge on idli-sambar and home-cooked fish.

His baby face is easily one of the most recognised in the country, but even while he was a kid it got lot of attention, says Telang. “Sachin was a very chubby kid, any guest to my place would without fail pull his cheeks,” she says with a chuckle.

“After Sachin joined Shardashram School, I could not keep in touch with him. However, his parents were always in touch. Whenever he played well, I used to call his mother and talk to her.”

Narrating an incident which she qualifies as unforgettable, Telang says, “after his first century in England (1990), Sachin and his father came to my place and gave me chocolates. That was the last time Sachin visited my house.

Telang says that she wants to visit Sachin’s house to meet his mother as “she has knee problem and is not keeping well”. “Now, I am a fan of cricket because of Sachin and I watch him play every time without fail.” 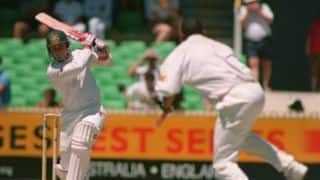