Even as England were walloped by Pakistan 3-0 in the United Arab Emirates (UAE), the world expressed surprise at a exceptional controversy free series. However, an innocent television interview by Saeed Ajmal has provided fodder to trigger a controversy. 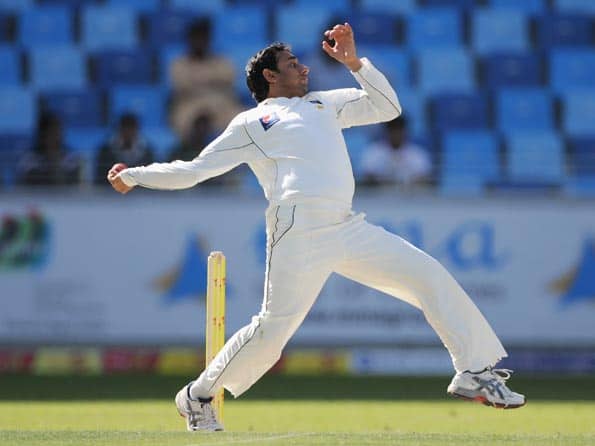 Saeed Ajmal’s statement about his bowling action in an interview to the BCC has raised eyebrows, but it seems a case of a man not proficient in putting his views correctly in English than anything wrong with his action © Getty Images

An England-Pakistan series without controversy seems to be an improbable eventuality. Right from the Mike Gatting-Shakoor Rana face-off to the gloomy days of the spot-fixing saga, rarely has a series involving the two countries concluded without a storm or two. Even as England were walloped by Pakistan 3-0 in the United Arab Emirates (UAE), the world expressed surprise at a exceptional controversy free series. However, an innocent television interview by Saeed Ajmal has provided fodder to trigger a controversy.

Ajmal told BBC TV that the International Cricket Council (ICC) has allowed a 23.5 degree bend in his bowling action. He said that the bend in his arm was caused by an accident and cricket’s governing body has given him a concession regarding the same. If one is to interpret his statement prima facie, one would be under the impression that the ICC has shifted from its 15 degree limit on throwing and made an exception for the Pakistan spinner. Naturally, such an understanding is bound to cause furore and attract unwanted attention.

In April 2009, Ajmal’s action was called during a One-Day International (ODI) series against Australia, ironically in the UAE – the scene of his latest decimation of the English batting. The supposed bend in his elbow while bowling the doosra concerned the umpires who reported his action. Nevertheless, he was cleared by a bio-mechanist and his elbow extension was said to be within the permitted range. However, one must remember that the analysis done almost three years ago doesn’t shield him from scrutiny in future games and if the match-officials suspect his action, they can report the same for further inspection. Therefore, if there is any doubt, the umpires should take the call trusting their naked-eye.

Going by clarifications given by the ICC and the Pakistan Cricket Board (PCB), the degree of straightening of the arm comes within the ambit of the 15-degree rule. On the other hand, the 23.5 degree Ajmal was referring to is the elbow abduction; in simple terms, the natural angle between the upper arm and the forearm. A bowler can come in and bowl with a bent arm (which may be natural) but cannot straighten it beyond the permitted 15 degrees at the point of delivery.

For more clarity, we must have a look at what the law says regarding throwing. The Marylebone Cricket Club (MCC)’s Laws of Cricket says that “A ball is fairly delivered in respect of the arm if, once the bowler’s arm has reached the level of the shoulder in the delivery swing, the elbow joint is not straightened partially or completely from that point until the ball has left the hand. This definition shall not debar a bowler from flexing or rotating the wrist in the delivery swing.” (Law 24 (3)) Thus, from the level of the shoulder to the point of delivery, a bowler isn’t allowed to straighten the arm. The only permitted level of straightening is the 15 degree mark set by the ICC and the definition clearly refers to the elbow extension and not abduction.

From the outset, it is clear that there was a huge misunderstanding and if it isn’t cleared, it can grow into a massive storm. There are many facets to the debate and each has to be dealt with cautiously so that the bigger issue is put to rest.

Firstly, the ICC and the PCB have to clear the exact degree of Ajmal’s elbow abduction. The ICC puts it at 15 degrees whereas the PCB’s estimate is closer to Ajmal’s number. The true measurement needs to come to the fore so that there isn’t a chance for any ambiguity in the future. The two different measures add more fuel to the fire and are likely to cause further confusion.

Secondly, one must remember that Ajmal’s English isn’t the strongest and his innocent remarks may have been misinterpreted. Having witnessed some of his interviews, one can make out that he isn’t able to put his point across very fluently as he would be able to do in his native medium. He may have been referring to his natural angle while saying that the ICC permitted him 23.5 degrees. On closer inspection, one finds that he also said “Otherwise no problem, straightaway cleared by ICC” which indicates that he may have been referring to two different cases – one being the natural angle and the other the elbow extension.

If the whole issue is based on a simple confusion due to a player’s inability to converse in English, it certainly calls for some measures. Players who aren’t able to deliver their point in the said language shouldn’t be forced to converse in it at post-match presentations or interviews. His zone of comfort should be identified and respected so that he doesn’t involuntarily put his foot in his mouth nor do his innocent remarks cause controversies.

In case of interviews such as the one Ajmal gave the BBC, a translator can be provided so that the players’ views are articulated precisely. Had there been one at the controversial interview, the issue may not have overblown to such proportions.

Let us give Ajmal the benefit of the doubt for the time being!