Shan Masood scored his maiden ton against Sri Lanka in the previous series.

Shan Masood proved his credentials when he slammed 125 against Sri Lanka when Pakistan were chasing 377 to win in the fourth innings of the third and final Test at Pallekele recently. Not only did Pakistan win the match, they won the series 2-1. Pakistan were staring at a defeat, having lost 2 wickets with just 13 runs on board, when an out-of-form Younis Khan walked in at No.4. They put on 242 for the third wicket that set the match up beautifully in Pakistan’s favour. This was Masood’s first international ton, prior to which he has scored just a fifty in his 10 innings, which came on his debut. Pramod Ananth believes Masood’s confidence will be sky high against England and the series could be a career-defining one.

Shan Masood became only the 28th player in history to reach his maiden Test ton with a six. It was a huge sigh of relief for a batsman, who has shown potential, but never made big runs which the selectors knew that he was capable of. His highest score of 75 came in his debut innings against South Africa, but failed to crossed the 40-run mark after that. READ: Younis Khan, Shan Masood create history

His big moment came against Sri Lanka in the third and final Test. The series was a hard-fought one and was level at 1-1.  Pakistan had conceded 63-run lead in the first innings and needed to chase down a huge score in the fourth innings. Nobody gave Pakistan a chance, especially after they had lost two quick wickets. However, Pakistan somehow managed to dig themselves out of the hole and register an impressive win. At the other end, Younis levelled Don Bradman’s 29 centuries en route to his unbeaten 177.

Masood was picked in place of Mohammad Hafeez in the third Test against Sri Lanka as the latter had to fly to Chennai for a bowling examination, after he was reported for illegal action by the umpires. Masood grabbed this opportunity with both hands and made a huge impact. He showed tremendous technique, temperament during his knock and did not get bogged down after 2 quick wickets fell at the other end. He was joined by his senior most teammate, who has often dug Pakistan out of such precarious situations. READ: Shan Masood scores maiden Test ton in Sri Lanka vs Pakistan 3rd Test, Day 4 at Pallekele

He took special liking to off-spinner Tharindu Kaushal, using his feet extremely well against him. He was ready to leave the ball outside off alone, but when he got his eyes in, he went after everything that was in his zone.

The tour to UAE will be a crucial one for England as they would want to redeem themselves after the thrashing they took last time. Pakistan will have the psychological edge going into the tour, but England too will go in with a lot of confidence after regaining the Ashes recently. With quality spinners at the disposal of both sides, it will be crucial as to how the two sides negotiate spin. Masood’s technique against spin is commendable and he will look to continue that in UAE as well. Masood’s first role will however be to get Pakistan off to a good start, perhaps a good opening stand — something they have lacked of late. READ: Shan Masood and others who reached their maiden Test hundreds with a six

Players from the subcontinent are known to play spin well. Considering that the pitches in UAE will be a spin-friendly, it certainly gives Pakistan the edge. England have Moeen Ali, Samit Patel and Adil Rashid as their spinners, but they do not have the experience of their counterparts.

With Masood being picked in the One-Day International (ODI) squad as well, it gives Pakistan more depth in their batting line-up. A good performance in the Test series could help him earn his maiden ODI call-up as well. Things are finally looking bright for the youngster and the upcoming series against England gives him the best chance to cash in on it. 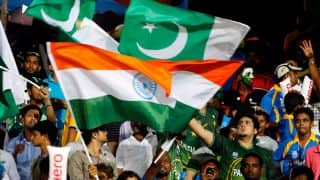