Shivil Kaushik picked up six wickets in seven appearances in his debut season for Gujarat Lions in the Indian Premier League (IPL) 2016.

An unknown quantity for many in the cricketing world, Shivil Kaushik became one of the major talking points in the Indian Premier League (IPL) 2016, where he represented newly-formed franchise Gujarat Lions (GL). His unique action reminded most of former South African bowler Paul Adams, who himself took to Twitter to express his joy over the fact that the art of Chinaman bowling was kept alive by the upcoming generation. In his seven IPL games, Kaushik picked up six wickets, including some big ones like Yuvraj Singh among others. In an exclusive interview with CricketCountry’s Pramod Ananth,  Kaushik speaks about his experience in the IPL, his goals, his upcoming stint in England and more.

CricketCountry (CC): Congratulations on a good debut IPL season. How was your experience playing in the competition, especially with the likes of Suresh Raina, Brendon McCullum, Dwayne Bravo and others?

CC: Were you confident of getting picked in the in the IPL 2016 auction?

SK: Very confident. I had given trial to other franchisees too. I did well in the KPL (Karnataka Premier League). I was hopeful of being picked.

CC: Your bowling action is not what one gets to see very often. Many liken your action to Paul Adams. What was the reason behind having this unique action?

CC: You had a brief interaction with Imran Tahir after one of the IPL matches. What was the discussion about and what sort of tips did he give you?

SK: I wanted to know how he bowls the flippers because he is one of my favourite leg spinners. He has also watched me bowl. I was very keen to speak to him. He told me a couple of things I can do and a couple of variations I can use. In T20s, you always have to be one step above the batsmen — it’s a very fast moving game. So, I wanted to learn how to bowl the flipper from him.

CC: You had mentioned earlier that you do not know which way the ball is going to turn. Is your focus just on pitching the ball in the right areas and leaving the rest to the pitch?

SK: I do know which way the ball is turning. That was something, I do not know (from) where it turned up. But yeah, pitching the ball in the right areas is one of the things I look forward to. You can turn the ball any way, but you still have to land it in the right area to get the batsmen in trouble.

CC: Do you still remain in touch with Anil Kumble, even after the Spin Star Contest? Has he been open to answering your queries?

CC: You picked up five wickets in seven matches in your debut season in KPL 2015-16 for Hubli Tigers. How vital was that experience going into the IPL?

SK: The experience was very vital because playing in front of a crowd is very different than playing just like that. When the crowds makes noise and there are a lot of people, it is a different atmosphere altogether. It was played with the white ball and under lights too. There were lot of international cricketers like KL Rahul and Robin Uthappa. They also helped me a lot, giving me tips and a lot of advice. They also always believed I could make it big, if I do well. So, KPL was a very good exposure for me and also a great experience.

CC: You are now travelling to England shortly where you will play for Hull County Cricket Club. What prompted you to have a stint in England and what are your expectations from this experience?

SK: Our chairman at IDBI Spin Foundation Dr. Makarand (Waingankar) facilitated it. He is the one, who is sending me to the Yorkshire Premier League. I am looking forward to this experience because it is the first time I am going to be playing overseas. I’ll be coming across various playing conditions, various cultures. So, I’ll learn a lot of things. I am really looking forward to it.

CC: You now have some experience playing competitive cricket. You had a successful IPL and are now travelling to England. Is playing for Karnataka in the domestic competitions your primary aim at the moment?

SK: I want to play for cricket for Karnataka in the Ranji Trophy tournament, then their 50-over (tournament) and the Syed Mushtaq Ali T20 tournament. I am not focused on representing them now. I just want to become a better cricketer. If I focus on the process of becoming a better cricketer, I’ll obviously reach the place I want to reach one day.

CC: You are playing cricket at a time when T20 cricket hogs all the limelight. Are you still interested in playing the longer formats like the 50-over matches or even the five-day format?

SK: I am very interested in playing (all formats). Goal for me is to play Test cricket for India. I want to play all the formats of the game because I believe I can be successful in every format. When I was growing up, there was no T20. I grew up watching Test cricket. So Test cricket and 50-over cricket is something I want to play too.

CC: Tell us more about yourself, about your parents, what they do, your studies and what made you pursue cricket.

SK: My mother is a teacher at Army Public School. My dad is an entrepreneur. He has his own business. Cricket was something, which my dad put me into when I was very young because he also used to play a bit of cricket. I started playing from a very young age, maybe 7 or 8 years (old).  Ever since I started playing I never looked back. It has always been my passion and has been my goal to pursue my career in cricket.

CC: So your cricket career started after you moved to Bangalore? When was that exactly?

SK: I shifted (to Bangalore from Gurdaspur) when I was 4 or 5 years old. I was very small. I am a Bangalore boy. I have been in Bangalore all my life. Bangalore has given me a lot of opportunities. My cricket career and my cricket journey started from Bangalore. I started playing at The Sadanand Vishwanath Cricket Academy. That was the first time I started playing. 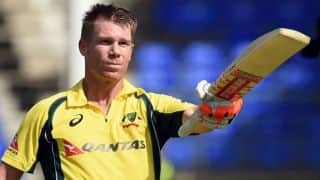