Unlike R Ashwin, Amit Mishra's performance is superior on foreign soil. However, given Virat Kohli's prefers having wicket-takers at his disposal, a leg-spinner has an edge over a finger-spinner.

In Virat Kohli‘s first Test as captain, he played debutant leg-spinner Karn Sharma over relatively experienced off-spinner Ravichandran Ashwin. This clearly showed Kohli’s intent. He wanted wicket-takers at his disposal. And who better than a leg-spinner can live up to this task. However, the plan backfired as Karn leaked runs close to 6 RPO. When MS Dhoni returned from injury, Ashwin made way to the playing XI, replacing Karn. Now that he has been dropped from the side, Amit Mishra has been, yet again, given the role of a game-changer. Hence, the question beckons: should captain Kohli prefer Mishra over Ashwin in the first Test against West Indies? FULL CRICKET SCORECARD: India vs West Indies 2016, 1st Test at Antigua

Ashwin’s Test record is stunning. No argument there. He is the fastest Indian bowler to take 50, 100 and 150 wickets in Tests. Scalping 176 wickets at 25.39 is praiseworthy. But, there’s more to it than it appears. Let’s break the statistics into home and away matches for Ashwin:

It’s easier to take wickets on a track that offers turn; something they call these days a rank-turner or a dust-bowl. And a finger-spinner like Ashwin has made full use of it. However, when he plays on foreign soils, he fails to emulate the same. His numbers drop outrageously; in fact, not even close to what they reflect in the matches played at home.

He will be playing Test cricket in the Caribbean for the first time. It will be a different challenge. He may not get enough turn, but given the wind around, he might get some drift, catching the batsmen in two minds.

Mishra, on the other hand, represented India in 18 matches, taking 65 wickets at 33.36. As a matter of fact, he made his Test debut three years before Ashwin did. Nonetheless, his statistics suggest why has been in and out of the team. Now let’s walk through his performances in home and away matches for Amit Mishra:

These numbers suggest that, when compared to Ashwin, Mishra performs better on away tracks.

Ashwin played a key role in India’s victories in Sri Lanka (after 22 years), and against South Africa at home. He was awarded Man of the Series in both the series for his swashbuckling performances. Mishra, except his five-wicket haul in his debut match, has not displayed a stellar show, but he has played a successful second fiddle to the frontline spinners, be it Harbhajan Singh or Ashwin. Read: Will India’s gruelling Test schedule make or break captain Virat Kohli?

No doubt that bowling finger spin is much easier than bowling wrist spin. And this is where Mishra gets an edge over Ashwin.

Ashwin can bowl in the same channel tirelessly, whereas Mishra will leak runs. He will over-pitch or bowl a full toss once in a while. Ask the legendary Shane Warne and he will explain it in details.

There’s more venom in a leg-spinner’s delivery. Their wrong ‘uns are even tougher to pick. But the problem lies in their accuracy. They often get carried away when they go for runs. Off-spinners, on the other hand, can keep the runs flow at bay by controlling line and length. But the odds of a leg-spinner getting a wicket are more. Read – VVS Laxman: India start West Indies series 2016 as favourites

India already have bowling all-rounder Ravindra Jadeja in their ranks, a wily slow left-arm bowler with immaculate accuracy and three First-Class triple hundreds to his name. With him in the team, India is likely to play only two spinners. The question is: will it be Ashwin or Mishra?

Both batsmen are armed with a batting technique that’s suited for Test cricket. While Ashwin favours leg side, Mishra likes to play with a straight bat.

Judging by the current run of form, Ashwin deserves to be picked over Mishra. However, everything will boil down to how the pitch is being dished out. Moreover, it depends on how captain Kohli pans out the strategy to bundle out the West Indies, eventually deciding who to play: Mishra or Ashwin? 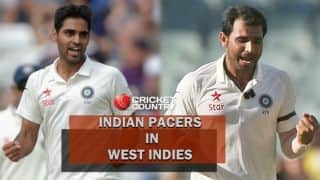