Of Test cricketers, Sid Barnes stature as a character has been matched by few, but perhaps he outdid even himself in 1948 when he toured England as part of Don Bradman s Invincibles.

The match that got underway at The Oval on May 8, 1948, saw Sid Barnes pull off one of his most famous antics. Abhishek Mukherjee recalls the incident.

Of Test cricketers, Sid Barnes stature as a character has been matched by few.

For example, he once caused a lot of commotion by throwing a massive slab of ice on the roof of the English dressing-room at The Gabba during an Ashes Test.

In another Test in the same series, this time at Melbourne, he jumped the turnstile to walk out to bat.

He once threw his wicket away in a Test innings on 234 because his captain had got out for the same score in that innings ( it wouldn t be right for someone to make more runs than Sir Donald Bradman ).

In a Sheffield Shield match in 1952-53, he walked out to do 12th man duties in a grey lounge suit (with a carnation in his buttonhole) and dark shades, accompanied by a steward (apparently called Tiger). He carried towels soaked in ice water, a coat-brush, a portable radio, deodorants, cigars, chocolate blocks, a comb, a mirror, and more.

But perhaps he outdid even himself in 1948 when he toured England as part of Bradman s Invincibles.

He mistakenly thought that he had hit the winning run in the Trent Bridge Test. He collected a stump, ran back, and had to return for there was a run still left. Earlier in the same Test he had scandalised Frank Chester with appeals of eh, light!

At Lord s he photographed the royal family without permission.

He fielded extremely close to the batsman at short-leg. He caught Ray Smith during the Essex match when the ball rebounded off his own chest. That did not deter him from standing close. In fact, with time he earned the nickname Suicide Sid. It turned out to be too literal in the end, but let us not get into that.

In the Old Trafford Test he collapsed on the pitch and was ruled out of active cricket when Dick Pollard hit him on his chest. He had to be taken to the Manchester Royal Infirmary with his left side paralysed. Years later he told Ken Mackay I had some Minties in my pocket when I got hit but I haven t seen them since those policemen carried me off.

He welcomed Bradman at the pavilion when the latter returned after scoring a 2-ball duck in his last Test innings at The Oval: he had captured Bradman s entire innings on his brand new cine-camera. Mind you, Bradman had walked out to bat at the fall of Barnes wicket…

He allegedly abducted 12th man Ernie Toshack to play tennis during the Northamptonshire match. There are more, many more, but we will restrict ourselves to the Surrey match.

The third match was not as easy. In fact, it was probably the closest any side came to beating the Invincibles. The Australians bowled out Yorkshire for 71 and 89, but they had been bowled out for 101 themselves in the first innings. Chasing 60 they were reduced to 31 for 6 before sneaking through.

The Australians were not pleased with the umpiring of Alec Skelding during the Leicestershire match. A really quick bowler in his heydays, Skelding had been umpiring in county cricket for 17 years.

Skelding had given Barnes leg-before against Leicestershire. To quote Barnes, the ball wouldn t have hit another set of stumps. Skelding also turned down several appeals from the Australians, Barnes included. The Australians jokingly referred to Skelding as blind .

He was appointed for the Surrey match as well. Barnes had scored 44 and 78 on that tour till then, but here he made merry against a side that would go on to become the strongest domestic team in the world in the 1950s.

It is not clear when the exact incident took place, for Surrey lost 12 wickets on the second day and 8 on the third.

When Surrey were batting, a dog ran on to the field. The Australian fielders, along with others, gave it the chase. Quite predictably, Barnes ended up catching it.

However, he was in no mood of letting it go. He walked towards Skelding with the dog in his hand. Poor Skelding had no clue what was to come, but he probably got an ominous feeling about it. Skelding tried to walk away, but Barnes was both persistent and quick.

Barnes caught up with Skelding and thrust the dog in the arms of the latter. Then he uttered: Now, Alec, all you need is your white stick. 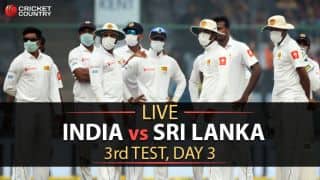