In Tests, the current South African side is perhaps the most feared one. With all areas of the game well-covered, it hardly comes as a surprise that they hold the Test Champions’ mace. However, add colour to their kits and the dominance fades away a little. Prakash Govindasreenivasan talks about South Africa’s need to bridge that gap and show consistency in all forms of the game. 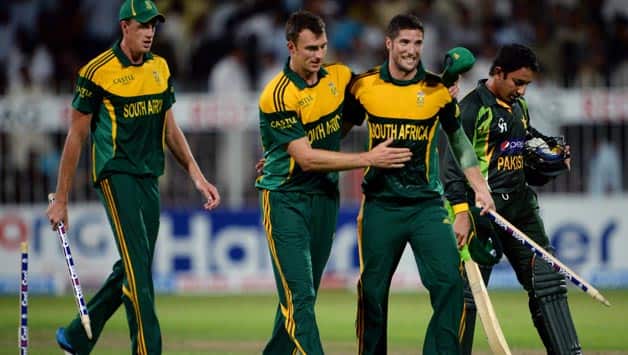 In Tests, the current South African side is perhaps the most feared one. With all areas of the game well-covered, it hardly comes as a surprise that they hold the Test Champions’ mace. However, add colour to their kits and the dominance fades away a little. Prakash Govindasreenivasan talks about South Africa’s need to bridge that gap and show consistency in all forms of the game.

Yet, their performances in the One-Day Internationals (ODI) has been found wanting. It was not until Pakistan imploded horribly in the first ODI at Sharjah that the visitors got away with a win despite putting only 183 on the board. The second game saw Pakistan tighten a few screws in their bowling department and defend a paltry total themselves.

Survey South Africa’s performance in ODIs throughout the year and one will notice growing inconsistencies in their performances. 2013 began with a home series loss to New Zealand. This loss came against a new-look Kiwi side led by Brendon McCullum, just a couple of months after the Test side had sweated it out to register a 1-0 win over Australia to retain the No 1 spot in Tests. They had also beaten the Kiwis comprehensively in the two-match Test series but showcased loopholes in their ODI game which were duly exploited by the visitors.

This followed a scrappy series win over Pakistan at home. The five-match series went till the final ODI in which South Africa put up contrasting performances. After scoring 315 in the first match and registering a 125-run victory in the first game, South Africa were bowled for 191 in the second as Pakistan leveled the series. The see-saw performances continued and the Proteas narrowly prevailed in the end.

When the ICC Champions Trophy 2013 began, a lot of eyeballs were fixated on de Villiers’ side. The team had transitioned well from the era of the Allan Donalds, Shaun Pollocks and the Makhaya Ntinis to build a strong edifice around the current core group. Champions Trophy was their chance to shrug off demons of the perennially attached ‘C-Word’ and clinch a major ODI title. Alas, the wait had to go on as they succumbed to pressure in the semi-final.

Playing against the England, their batting went on a self-destructive mode as it was one of those days when even the monk-like character in Amla went for an expansive pull shot and ended up giving a simple catch. Even as David Miller and Rory Klienveldt tried to put up a fight, England had bowled them out for 175 and sealed their final spot in just 37.3 overs with seven wickets in hand. Once again, a major ODI tournament title remained elusive to South Africa as they returned home empty handed.

After finishing their tour of UAE, South Africa return home to face India in what is once the most anticipated series of 2013. The sheen has slightly worn off, but the hosts will be wary of the current Indian bunch when they take them on in the ODI series first. While conditions will not suit the Indian players, one simply cannot write them off in the limited-overs format of the game. It could be a great test for de Villiers & Co. to overcome a stern challenge by Mahendra Singh Dhoni’s men. If they manage to finish on top, it could be a strong step forward in their endeavour to bridge the growing gap between their ability and performances in Tests and ODIs.

India vs Australia 7th ODI at Bangalore: India 103/0 in 16 overs; Dhawan gets his half-century