South Africa won the final Test at Centurion by 280 runs, though they lost the series 1-2.

South Africa ended the four-match series against England for the Basil D’Oliveira Trophy 2015-16 with a commanding 280-run victory in the final Test at Centurion. The win, however, will only serve as a means of consoling themselves after having conceded an unassailable 0-2 series lead to the Alastair Cook-led England, which also caused them to lose their No. 1 Test rank. While there are a lot of areas the Proteas must work on if they are to regain the ICC Test mace, they can draw a plenty of positives from some of the refreshing, often brilliant, individual contributions from their side. Following are the members of the squad arranged according to the players’ batting positions for the recently concluded series rated on a scale of 1 to 10, with 10 being the highest. Scorecard: South Africa vs England 2015-16, 4th Test at Centurion: Day 5

1. Stiaan van Zyl (1/10): South Africa’s opening woes since the retirement of the legendary Graeme Smith have persisted, and continued in this series for the most part with the failures of van Zyl. The southpaw, who represents the Cape Cobras in the domestic competition, ended up scoring a mere 69 runs in the series at a poor average of 13.80.

2. Dean Elgar (6/10): Elgar has looked more settled than van Zyl at the top and his defiant 118 against the rampaging English attack at Durban is a testament to his grit and talent. While Elgar had a poor run in the fourth Test, in which he could only muster 20 and 1 respectively, he ended up as the fifth-highest run-getter in the series with 284 runs at 47.33 to his credit.

3. Stephen Cook (8/10): Cook finally managed to get the much-awaited Test debut after a lot of hue and cry. He ensured that he made his first innings a memorable one by becoming the 100th batsman to score a 100 on Test debut. While he could not repeat the feat in the second innings, in which he was caught behind after getting off to a good start for 25, he certainly has been one of the most talked-about players in this series, and is a bright prospect for the opener’s slot in the South African Test team.

4. Hashim Amla (8/10): Hashim Amla may have disappointed with the bat in the first and third Tests at Durban and Johannesburg respectively, but was outstanding in the others. His performances in the second and fourth Tests helped shape the match in South Africa’s favour, especially in the second Test in which his majestic 201 helped guide South Africa to a score in excess of 600. Amla scored his second ton of the series at Centurion, and came very close to getting his third, as South Africa produced a turnaround with the bat in that match and won the contest by a 280-run margin.

5. AB de Villiers (4/10): The stand-in South African Test captain had a terrible series against England when compared to his terrific run in Tests and One-Day Internationals (ODI) for the past one year. To add to de Villiers’ woes, he has been dismissed for three consecutive ducks in the last two Tests.

While his failures in his most recent innings are bound to leave a bitter aftertaste for quite some time, let us not forget that he had scored a 211-ball 88 in the second Test at Cape Town, as well as a hard-fought 49 in the first innings of the first Test at Durban. Also, de Villiers had to don the wicketkeeping gloves in the first Test, in which he affected a total of seven dismissals, and was generally the fittest member of the side when it came to fielding.

6. Faf du Plessis (3/10): Du Plessis has had a terrible run in Tests in recent times, starting from the tour of India and the series against England was no better. Barring his innings of 86 at Newlands in the second Test, the South African T20I captain failed in the rest of the innings, and was ultimately dropped in favour of JP Duminy for the final Test.

7. JP Duminy (3/10): Duminy’s lowly performances, along with that of du Plessis’, has created a conundrum for the No. 5 spot in the Proteas Test side, with the likes of Rilee Rossouw likely to get an opportunity at that slot in the future. In the two games that he got to play in, Duminy collected a mere 73 runs at an average of 24, making him only marginally better than van Zyl.

8. Temba Bavuma (7/10): Bavuma has been a revelation for South Africa after his display of elegance and grit, that ultimately fetched him 248 runs at an impressive average of nearly 50. Bavuma became the talk of the town after scoring the first Test century ever by a black South African cricketer, and his unbeaten innings of 76 in the second innings of the fourth Test helped form a life-saving partnership with Amla, that ultimately played its part in setting up the win for South Africa.

9. Quinton de Kock (7/10): Quinton de Kock may have sealed his spot in the Test side as the first-choice wicketkeeper following his impressive performance in the final Test at Centurion. De Kock was included in the squad for the second Test, in which he hardly made a difference, and was ruled out of the third due to injury. It was in the fourth game that he struck a near run-a-ball 129 in the first innings to propel the hosts to 475. He was also agile with the wicketkeeping gloves, collecting four catches in each innings, though he did miss out on a couple of dismissal chances.

10. Dane Vilas (3/10): After a horrendous tour of India, Dane Vilas was dropped from the Test side, with de Villiers taking up wicketkeeping duties for the first Test before the inclusion of de Kock. However, his sudden inclusion in the team for the third Test is perhaps his most interesting contribution in the series. He fell for scores of 26 and 8 as South Africa were hammered by seven wickets to surrender the series, and was released from the squad ahead of the fourth Test.

11. Chris Morris (5/10): Morris was included in the squad after the first Test, and conceded the most expensive figures by a South African on debut (1 for 150) at Cape Town. However, He proved to be a talent with the bat in the lower-order, contributing to South Africa’s score of 627 with 69 runs. After a forgettable third Test, he made way for Dane Piedt.

12. Kagiso Rabada (9/10): Easily the best bowler in the entire series, Rabada has proved his worth as someone who will succeed Dale Steyn as the future pace spearhead of the South African bowling attack. After an expensive haul of 3 for 175 at Cape Town, Rabada went on to record his maiden five-wicket haul in a Test innings (5 for 78), although it eventually went to a losing cause. However, it was his record performance in the fourth Test, in which he took 13 wickets for 144 runs — that has set him apart — and brought him at par with some of the best bowlers across formats in the current generation. In the end, Rabada overtook Broad to finish as the leading wicket-taker of the series with 22 scalps.

13. Dane Piedt (6/10): Piedt played in all the matches except in the third, in which South Africa opted for an all-seam attack. Much like England’s Moeen Ali, he helped get the crucial breakthroughs when everyone else failed, and eventually finished with 11 scalps in the series. Piedt also proved to be a reliable figure with the bat down the order with his 104-ball 19, that gave de Kock the necessary support to bring up his maiden Test century.

14. Kyle Abbott (6/10): While Abbott, who played at Durban and Centurion, did not get too many wickets to his name, he played his part by bowling tight spells that increased the pressure on the opposition batsmen, causing them to fall victim to the other bowlers while attempting to step up the scoring rate. He has had his share of injury-related problems in the ongoing series, and somehow managed to get himself fit ahead of the final Test.

15. Morne Morkel (6/10): Morkel finished as the third-highest wicket-taker of the series behind Rabada (22) and Stuart Broad (18). While he did bowl a quite a few lethal spells that fetched him crucial wickets, especially alongside Rabada in England’s second innings in the final Test, there were also phases where he looked clueless resulting in him getting hammered by the likes of Joe Root and Ben Stokes. In the end, he still emerged the most consistent wicket-taker for South Africa after Rabada.

16. Dale Steyn (7/10): Steyn’s unfortunate run-ins with injuries, one that forced him out of a majority of the Test series against India, continued in this series as well. The leader of the attack stopped bowling after 3.5 overs in the second innings due to a shoulder injury, which ultimately ruled him out of the series as well. Steyn had earlier signalled his intent after taking four wickets for 70 runs in the first innings, including the scalps of both the openers.

17. Hardus Viljoen: The Lions’ pacer was brought in as a cover for the injured Abbott, and was given his debut in the Johannesburg Test after the team management opted for an all-seam attack. He got rid of Alastair Cook off his very first delivery in international cricket. That however, turned out to be his only wicket in his international career so far, and even though Viljoen bowled some serious pace, he was hammered all over the park by the English middle-order. 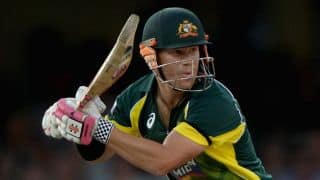 Admiration for Virat Kohli sends his Pakistani fan to jail