Not only did Sri Lanka manage to pull off a win, they also managed to keep the series alive. The series will now be decided in the final game at Cape Town on Wednesday.

Sri Lanka finally won a match on their dismal South Africa tour. The second T20I of the three-match series turned out to be a humdinger, Sri Lanka emerging victorious in the end by 3 wickets in the final over thanks to skipper Angelo Mathews heroic knock after Lakshan Sandakan had bamboozled South Africa. Not only did Sri Lanka manage to pull off a win, they also managed to keep the series alive. The series will now be decided in the final game at Cape Town on Wednesday. Meanwhile, we present some highlights from this low-scoring yet high-octane game at New Wanderers, Johannesburg:

Lakshan Sandakan s mystery : Sandakan, the Chinaman bowler, made a sensational debut; one which he must have dreamt of. From the onset, he kept the South African batsmen under the pump. They were visibly finding it difficult to deal with him. Not just the batsmen in the middle, but the ones in the dugout were struggling to read him as well. This was evident when everyone in the dugout was glued to the television sets every time Sandakan bowled. Sandakan took a wicket with his first ball, was on a hat-trick, and finished with 4-0-23-4 to break the back of South African batting. Full Cricket Scorecard: South Africa vs Sri Lanka 2nd T20I at Johannesburg

Isuru Udana s slower-ones : The second T20I was the 8th of Udana s career in his 8th year in international cricket. Interestingly, Udana had made his T20I debut during the 2009 World T20 in England along with Mathews. Since then their careers have taken significantly different paths. Nevertheless, he was a hero in Sri Lanka s win on Sunday. The Proteans found his slower ones difficult to deal with, as he ended with figures of 2.3-0-13-3.

Angelo Mathews fighting knock: Mathews had been under fire throughout the tour. He had failed to leave a mark with his performance till now, but with his team s back to the wall, he pulled off an inspirational performance to turn things around. He walked out with Sri Lanka on 35 for 3 after 5 overs. It is often said the smaller targets are difficult to chase. Just when Sri Lanka were looking down and out chasing 114, Mathews held fort from one end, and kept going as wickets kept tumbling from the other end. Towards the end, when his side needed him the most, he got himself injured while stealing a quick single. Unable to take singles, Mathews finished off the game with two sixes in the final over of JJ Smuts, guiding his side to their maiden win on the tour.

Lungi Ngidi s spell: South Africa have a knack of giving world-class pacers. Young Ngidi, who won Man of the Match on debut in the previous match, was exceptional in the second T20I too. Defending a modest total, he generated tremendous pace, striking early blows and picking up 3 wickets in his first spell. When Mathews and Dinesh Chandimal were in the middle of a 51-run partnership, Ngidi returned for his final over and removed Chandimal, which triggered a mini-collapse. He ended the match with figures of 4-0-19-4, giving ample proof that he is a star-in-the-making.

Imran Tahir s catch: With 17 needed of 18 balls, Farhaan Behardien threw the ball to Smuts. He immediately delivered, but not without Tahir s assistance. Seekkuge Prasanna hit the first ball towards deep square-leg boundary. It seemed he might clear the fence, but Tahir, who was positioned there, held on to a brilliant catch near the rope, displaying his awareness of his distance from the rope. The wicket, which was as much his as it was Smuts , changed the equation of the game for a while. 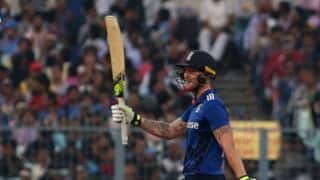 India vs England: Ben Stokes says it's good to back at Eden Gardens