Here we take a look at the passages from the play that proved decisive:

MS Dhoni and CSK are synonymous. So when he didn’t walk out for the toss on Thursday, it was a strange sight. Only the fourth time in IPL history that Dhoni missed a match and for the first time since 2010, CSK took field without their Thala. Of the 187 matches CSK have played in IPL, Dhoni has made the XI 183 time. Suresh Raina, who led the defending champions in his absence, has missed just two games for CSK, playing in 185 matches. Dhoni missed the clash due to a back spasm he experienced in CSK’s previous match against Kolkata Knight Riders.

His absence also resulted in CSK rejigging their Playing XI. They brought in Sam Billings as wicketkeeper-batsman but to meet the limit of four overseas stars, were forced to drop spinner Mitchell Santner. The left-arm spinner was replaced by spinner Karn Sharma.

Rashid Khan struggled to find his bearings after being introduced in the eighth over of CSK innings. His first delivery of the match swept away by Shane Watson for a four and he kept on dropping short. His first over resulted in eight runs. Kane Williamson pulled him out of attack after first over and reintroduced him in the 12th over where he began to make impact. Although Raina did peel off a boundary but only after being beaten twice in a row. At 97/2 in 13 overs, CSK were pretty much on a solid footing, ready to explode when Rashid delivered the game-changing over in which he snaffled Raina and Kedar Jadhav, both lbw. The visitors slipped to 99/4 and struggled to get going thereafter. Rashid finished with 2/17 from four overs.

Despite the slump, CSK had the firepower to explode and launch a late attack. Considering SRH’s reputation of leaking runs in the death overs, the CSK would have fancied their chances of posting a challenging total. But Bhuvneshwar Kumar and company came back strongly in the second half of the innings to restrict them. In the first 10 overs, CSK struck 80/1. In the remaining 10, they managed just 52 for the loss of four more wickets. Bhvuneshwar has been leaking runs at this stage but he made up for it superbly on Wednesday. His four over cost SRH just 21 runs. He bowled the final over as well in which CSK managed just five runs. Ambati Rayudu scored 25 off 21 while Ravindra Jadeja managed 10 off 21.

Considering CSK batsmen’s struggles in the second part of their innings, SRH would have wary considering the quality of spinners their opponents boast of. Nobody told that to David Warner though. He was his fluent best after struggling to score quickly since his blazing century against Royal Challengers Bangalore earlier this season. He was in devastating mood, not sparing anyone. Deepak Chahar was chipped and slapped for consecutive fours, Imran Tahir was belted for three of those in succession. After sending the ball rolling past the boundary two more times against Chahar, he reached his 50 45th of his IPL career- off just 24 deliveries. During that same stage, his opening partner Jonny Bairstow had faced just nine deliveries with Warner running the show. He had taken SRH to 66/0 in 5.3 overs before being dismissed.

Bairstow’s contribution in a blazing start to the chase (66 in 5.3 overs) was just 15 runs. CSK did manage to keep the other batsmen quiet, getting rid of Williamson (3) and Vijay Shankar (7) cheaply. However, they failed to dislodge Bairstow who rode on the platform that Warner had set in the Powerplay to fuel SRH’s chase. He remained unbeaten on 61 off 44 with three fours and as many sixes the last of which took his team to their fourth win of the season and thus break a run of three straight defeats. 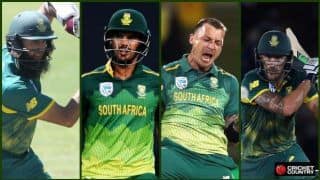 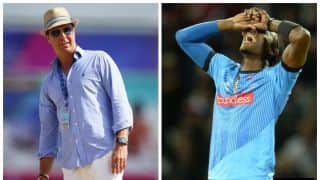