Had Eng managed a few more runs, the series could well have been tied 2-2 after four games.

Sri Lanka beat England in a close encounter, in the fourth One-Day International (ODI) to go 3-1 up in the seven-match series. The game saw some excellent individual performances and key moments. Shiamak Unwalla looks at some of the highlights of the match.

Dhammika Prasad’s early strike: Dhammika Prasad seems to revel against England; his spell against them at Headingley in 2014 would still be fresh in his memory. He has been in great nick even in this series, and he continued that form when he got rid of Alex Hales for a golden duck. Though he bowled only six overs his early spell was probing and ensured England didn’t get away.

James Taylor’s classy comeback: Kevin Pietersen had once said that James Taylor was too short to succeed in International cricket. Taylor ensured that Pietersen stood corrected; He proved that being slight of body in no way hampers ability, as he weathered a rough start to play a superlative knock in only his third ODI. His excellent 90 will give the English selectors something to think about when they sit to select the final 15-member squad for the ICC World Cup 2015. One shot that stood out was the short-arm pull he played off Thisara Perera which sailed away over long-on for six.

Eoin Morgan’s late surge: Coming into this match, Eoin Morgan had scores of one, 17, and one in his last three ODIs. Captaining the match in Alastair Cook’s absence, Morgan had to come up with a substantial score, and he did not disappoint. He started going after the bowling from the 44th over, but really cut loose in the final over, smashing two sixes and a four to help England to a competitive total.

The same old story: “Kumar Sangakkara and Mahela Jayawardene guide Sri Lanka to victory” ought to be set as a default every time Sri Lanka play a match. The duo came together at 69 for two in the 15th over, and added 96 invaluable runs together. When they were batting, England never looked like they had a chance. Sangakkara’s 86 earned him the Man of the Match award, while Jayawardene’s 44 helped hold the innings together.

The late stutter and the captain’s knock: If Sangakkara and Jayawardene starred in a win, could Angelo Mathews be far behind? The skipper came in at the fall of Jayawardene’s wicket, and stayed there till the end. His unbeaten 51 off 60 balls meant that despite an excellent late fight back from England, the hosts managed to prevail in the final over. For their part, England will take great confidence from their strangling bowling in the death. Had they managed a few more runs, the series could well have been tied 2-2 after four games. 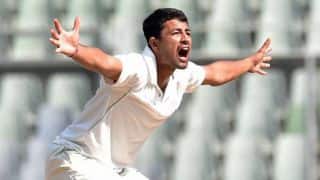