Kaushal is far from a complete product, and needs more consistency in his length.

A relative unknown Tharindu Kaushal caught Pakistan off guard to give Sri Lanka a handy base for a probable series-levelling win in Colombo. Abhishek Mukherjee looks at a simple but clever strategy by his team management that proved fruitful.

Rangana Herath has served as Sri Lanka’s main spinner since the phase out of prolific off-spinner Muttiah Muralitharan, and has featured as one of the main weapons of his team’s bowling attack. His strengths are a good drift, flight and dip, and a potent arm-ball, all of which were blunted by a calculated assault on him in Galle. What off-spinner Tharindu Kaushal brought to his team in Colombo is a neatly-thought out surprise factor to counter Pakistan’s preparations. Sri Lanka vs Pakistan 2015, 2nd Test Day 1, Highlights

Not only was Kaushal a new face (he had only played one Test before this), he had an unusual action that could take time for the opposition batsmen to get used to, and demanded separate methods to tackle than the ubiquitous Herath.

Kaushal trots in at an awkward angle, tilts his body to his left to give him leverage, and generates power from his wrists and fingers to bowl a fizzing off-spinner or a doosra. He is generally playable when he bowls a little too full or a little too short: there were occasional lapses in his length against Pakistan on Friday. But he undid the batsmen by his enormous spin that took most by surprise, this off deliveries which pitched full without being over-pitched, thus disallowing batsmen to smother the spin by their forward lunges. Yasir Shah becomes quickest Pakistani to 50 Test wickets

Hafeez was dismissed by a ball that kept turning into him, eventually trickling on to the stumps off his pads. Asad Shafiq lost his wicket to a similar delivery, due to his failure to negotiate the sharp turn. Sarfraz Ahmed decided to bring out the drive, after having successfully employed the sweep for a brief while, on a potent length, and paid the price as the imparted spin made the ball miss the meat of the bat, kiss the inside edge, and lob to Angelo Mathews at first slip. Kaushal’s fourth and fifth victims didn’t need as much quality to be dismissed, as they were tail-enders — while Wahab Riaz attempted a sweep shot and failed to connect bat with ball, Yasir Shah didn’t connect his slog properly to fall to a diving, tumbling catch from Kumar Sangakkara. But his quality to chip away at Pakistan capable batting order, largely nipped in the bud by that sharp turn, allowed him a sight at the easy lower-order targets for his five-for. Yasir Shah’s 7 for 76: Best figures by a visiting bowler in Sri Lanka

Kaushal is far from a complete product, and needs more consistency in his length, particularly, to be a regular wicket-taker for his country. But on this occasion, at least, he was the central figure of a strategy neatly executed by his team management. So effective was it that Herath was reduced to collecting balls from the outfield and throwing them back in for the entire innings. Both openers scoring ducks in the fourth innings of a Test

An unorthodox bowling action was complemented by a conventional method of spin-bowling — turn — to outfox their competitors and facilitate a comeback. Dhammika Prasad, the fast bowler, also played his part by aggressive and disciplined initial spells, as Younis Khan’s 100th Test had Pakistan collapsing for 138, providing a handy advantage to the hosts, who have not yet been bowled out in their first dig (they are 304 for nine at stumps on the second day) to build towards getting a series-levelling draw. A ‘low’ for Rangana Herath India tour of Zimbabwe 2015: Sending a second-string side has more pros than cons 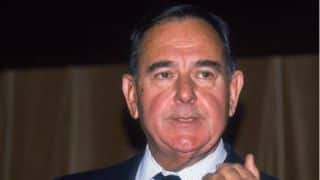