England, in this century, have never hosted Sri Lanka during the prime of the season.

Since 1998, the Sri Lankans have always played Tests in England during the first part of the season, in damp, cold conditions, leaving the sunbathed July and August for more preferred teams. Arunabha Sengupta argues that this is unfair to some of the most talented and indigenous cricketers the world has seen in recent years.

The numbers notched up by Kumar Sangakkara with his wide, classy and handsome willow are nothing short of phenomenal. As the article is being written, the southpaw averages a whopping 58.77 across 124 Tests and 11462 runs – with a mind-boggling and unreal 8345 runs at 70.72 in the 76 Tests in which he has not donned the big gloves.

Yet, his crown as the greatest modern batsman has never been universally acknowledged. While the sparkling eloquence of the overall figures has often been casually ignored, critics have been quick to spot some apparent chinks in that glossiest of armours.

Till very recently, his rather pedestrian figures in England formed the clinching argument for many naysayers. Indeed, Sangakkara scored at a meagre 30.58 in Ole Blighty before this summer. Now, one has to hunt elsewhere for the supposed gaps, because in the couple of Tests in the current series he has already caressed 311 runs and heaved his average over the 40-run mark.

When one looks at this oddity that had erstwhile plagued the great batsman in greater detail, something stark and surprising stares back at us. Sangakkara will end the summer having played 11 Tests in England. And this is his fourth full tour. He has not missed any Test match Sri Lanka has played in the country since his debut.

Yes, Sri Lanka has played just 11 Tests in England in the last 16 years. The picturesque island nation from Asia has grown from strength to strength during that period, producing talent both exceptional and indigenous. Sangakkara is without doubt one of the rarest gems of cricket. Muttiah Muralitharan was one of the greatest spinners of his generation, whose off-spin came with a dimension unprecedented and often unplayable.

Mahela Jayawardene’s record outside Sri Lanka suffers in comparison to his magnificent deeds at home, but no one can deny the class and pedigree that he brings into his craft. From the days of Sanath Jayasuriya to Tilakaratne Dilshan, from Lasith Malinga to Ajantha Mendis, the cricketers of the island have not only been of premium quality, they have been unique and thrilling. Even the sedate stalwarts like Thilan Samaraweera have stamped their authority in the game. Youngsters like Kusal Perera show increasing signs of carrying on this fascinating strain of the island’s cricket. And England have continued to mete out the rather supercilious treatment reserved for a second rate cricketing power.

Not only have Sri Lanka played just a handful of Tests in this century, three apiece in 2002, 2006 and 2011, and a pitiable two in 2014, they have always done so during the early part of the season – never playing beyond June 24 after 1998. Thus, the Lankans have always had to ply their trade in the damp and cold of the English May and early June, before the sun is strong enough to honestly declare the onset of summer.

Since 1990, playing in the English May has been earmarked for the perceptibly weaker teams – Zimbabwe, Bangladesh, occasionally New Zealand, a beleaguered Pakistan, West Indies of the post-2000 era. And since 2002, the Sri Lankans have been treated with similar disdain even as they have demonstrated some of the most exciting cricket in the world.

The Australians are obviously granted the full season, and seldom play Tests before the second half of June. South Africa and India are also welcomed with the warmth of July and August. None of India, Australia and South Africa have played Tests in England before July in this century. And during the same period, Sri Lanka have never played after June.

This is doubly strange because till 1998, when the side was still recognised as a minnow – in spite of a World Cup triumph – they had always played in England under the bright August sun. Yes, they had played just four Tests in 14 years. Even after Sidath Wettimuny and Duleep Mendis had embarrassed the hosts by having the best of a draw in 1984, the next Test for the Lankans in England came four years later. There was one in 1988, and one in 1992, both won by the home team.

The organisers even had the audacity to call the side over for a one-off Test in 1998, two years after Arjuna Ranatunga had lifted the World Cup. And at The Oval during the last five days of August, Muralitharan mesmerised the batsmen to pick up 16 wickets, handing out a humiliating 10-wicket defeat.

Strangely, that was the last Test Sri Lanka played in England in actual summer. Since then, it has been all May and early June – periods when conditions are difficult for visiting batsmen to make runs and for the sub-continental spinners to grip the ball. When the Sri Lankan cricketers are measured against the rest of the world, by having their figures in England hauled up and set beside their peers, one needs to bear in mind that they always have to play in the worst of conditions.

Just how bad are the conditions?

If we take the numbers for non-trivial team innings from 1990, in May the overseas teams have scored at 25.11 per wicket. In June, the numbers improve to 30.48. By July they go up to 36.85 and remain in the mid-thirties through August. Of course, part of the explanation may stem from weak sides having played in the first part of the summer, but there is no doubt that the conditions are far more difficult in the damp, early summer than the sunny second half.

Sangakkara has never played in England under the warm July sun. His figures in England have to be weighed with care before being used as a statement of his class. And one wonders what frontiers they would have conquered if he had been allowed to bat in the latter months that have seen many a batsman blossom in the full sunshine.

Besides, what about the cricket loving crowds in England? They have surely lost out on some exceptional cricket that could have been played by an excellent group of talented cricketers, if only they had been allowed more Test matches and friendlier conditions.

(This article first appeared here in dna. Arunabha Sengupta is a cricket historian and Chief Cricket Writer at CricketCountry. He writes about the history and the romance of the game, punctuated often by opinions about modern day cricket, while his post-graduate degree in statistics peeps through in occasional analytical pieces. The author of three novels, he can be followed on Twitter at http://twitter.com/senantix) 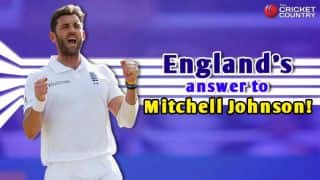