Sunrisers already had an extremely rich bowling attack. They have now added Nabi and Rashid to that, though it is doubtful that both will feature in the opening match.

We all remember what happened that night, the last of IPL 2016. Royal Challengers Bangalore (RCB) needed 15 off the last over, at their home, in front of a partisan crowd cheering every run. David Warner had saved Bhuvneshwar Kumar for the occasion. Bhuvneshwar bowled five straight, low deliveries; two of them were yorkers and the other three low full-tosses. It was an outcome of months of practice and planning. The first 5 balls fetched a mere 5 runs and a run out; the match was sealed there. Warner s Sunrisers Hyderabad (SRH) lifted their maiden IPL title, crushing a million hopes perhaps more as RCB finished runners-up for the third time in nine editions. They will still be looking for their maiden title when they take field in IPL 10, against the same team to whom they had conceded the title that night. Sunrisers will almost certainly take field with serious psychological advantage.

But this is not about RCB and their crestfallen fans who had to remain happy with the fact that they owned two of the top three scorers (Virat Kohli and AB de Villiers) and wicket-takers (Yuzvendra Chahal and Shane Watson) in the tournament. Sunrisers, on the other hand, had two men in the top five (Warner and Shikhar Dhawan in batting and Bhuvneshwar and Mustafizur Rahman in bowling). But then, that has been the secret of Sunrisers success throughout the tournament. They had their share of big names (Warner, Trent Boult, Yuvraj Singh, Eoin Morgan, and Kane Williamson, for example), but they lacked the glamour and hence, hype around some of the other sides.

What had clicked last year?

Sunrisers had a seam-dependent attack last year. Ashish Nehra spearheaded the pack, and was supported by Bhuvneshwar and Mustafizur Rahman. Despite wreaking havoc on the hapless Indians earlier in the season, Mustafizur remained largely an unknown entity. The accuracy of Nehra, the new-ball skills of Bhuvneshwar, and the deceptive cutters of Mustafizur worked wonders for SRH.

These men were ably supported by Moises Henriques, who doubled as an explosive middle-order. When Nehra injured himself, Barinder Sran stepped up. The leg-breaks of Karn Sharma did not work, but Bipul Sharma stepped in with handy left-arm spin but then, it could not be denied that they needed an experienced spinner.

Warner carried the batting on his shoulders, supported more or less ably by Dhawan. Yuvraj missed a few matches, but Henriques stepped up the pedal whenever required. Naman Ojha had a stop-start tournament, but Ben Cutting, despite a handful of appearances, pulled off quite a few impactful performances. But still, they needed batsmen, preferably men who could also send down a couple of overs.

Whom did Sunrisers release?

Sunrisers released Morgan, perhaps because they preferred a local batsman. With Williamson already present in the side, Morgan was probably redundant. While Yuvraj did not play all matches, Deepak Hooda gained in stature as the tournament progressed. They also have Ricky Bhui in the middle-order, which meant end of the road for Tirumalasetti Suman.

Boult was let go as well, probably because the Sunrisers already boast of a strong local bowling line-up. Their strength also meant that there was no place for Ashish Reddy.

They also released Aditya Tare and Karn, which meant they needed a backup for Ojha behind the stumps as well as at least one quality spinner. While Bipul did a decent joxb, he is technically a batting all-rounder.

What did Sunrisers do at the auction?

Mustafizur was brilliant in previous year s IPL, but he has also picked up the odd injury every now and then. So SRH acquired Chris Jordan, an intelligent seamer with a deceptive slower delivery, a lower-order biffer and an excellent fielder.

As mentioned, they needed quality spinners. Their first key pick was Afghan prodigy Rashid Khan. While wrist-spinners often do not come off in India, they have been extremely successful in IPL. They added Pravin Tambe as backup. They also got Mohammad Nabi, their other Afghan, one of the finest all-rounders in contemporary limited-overs cricket. Not only will Nabi strengthen their batting line-up, he will also add that extra spin option to the attack.

The economic Ben Laughlin and Mohammed Siraj came in (presumably as backup for other seamers, since Nehra is also injury-prone). Siraj has been in terrific form in the domestic season; as a plus, he knows the conditions inside out, for he is a Hyderabad cricketer.

They also drafted in Tanmay Agarwal, which was an interesting selection. Small of frame and 21 of age, he may not look like it, but Agarwal can hit the ball extremely hard. Not only did he top the domestic T20 championship, he also got his runs at a strike rate of 162.

As for the second wicketkeeper, they opted for Eklavya Dwivedi.

VVS Laxman, CricketCountry s Chief Cricket Mentor, was quite satisfied after the auction: We got all the players we wanted, all the skill-sets we wanted to acquire. As of now the team looks formidable. The new recruitments now brought stability, and will allow us to try out four or more different combinations.

What will be their game plan?

Sunrisers already had an extremely rich bowling attack. They have now added Nabi and Rashid to that, though it is doubtful that both will feature in the opening match. Since Warner is a certainty, they will have to choose between three of Nabi, Rashid, Cutting, Henriques, and Mustafizur as their overseas players in the starting XI.

Who will be the local cricketers? Dhawan seems likely as Warner s partner; Ojha is a certainty, as is Nehra-ji provided he remains fit. Given his splendid performance last season (23 wickets at 21.30, economy rate 7.42), Bhuvneshwar is also a shoo-in.

That leaves us with three Indians and three overseas cricketers. One option may be to stuff the line-up with both all-rounders Cutting and Nabi (did you know Nabi scored at a strike rate of 264 in the recently concluded series against Ireland?). Henriques had an average of 29.22 at a strike rate of 142 in this edition of BBL, but he bowled a mere 3 overs. He will play as a batsman who will send down the occasional over.

This will make Nabi a certainty. However, this will also seal Nabi s claim as the third overseas player (after Warner and Henriques). With our four Indians (Dhawan, Ojha, Nehra, and Bhuvneshwar) they have seven. They now need two specialist batsmen and two bowlers, at most one of whom can be an overseas cricketer.

Who are the batsmen? Of course, Williamson is at the forefront, but that would mean leaving out both Rashid and Mustafizur (they can rule out Jordan and Laughlin at this stage). There are several options:

1. Pick Williamson and one of Agarwal, Hooda, Yuvraj, and Bipul. This will force them to pick both Tambe and Sran.

2. Pick two from Agarwal, Hooda, Yuvraj, and Bipul. This means they can go with either (a) Mustafizur and Tambe or (b) Sran and Rashid.

There is, however, a problem: Agarwal does not bowl, and neither Yuvraj nor Hooda bowled a lot last season (both got less than an over a match). This will probably mean Bipul will make it to the starting XI in the first match of the tournament, against RCB on April 6.

Is the extra bowler required? Yes, since these occasional bowlers have often picked up the odd wickets, perhaps due to their lack of pace. Rarely have teams finished their 20-over quota with five bowlers. Additionally, if a specialist bowler goes for runs, the captain can replace him.

Unfortunately, this will also mean that both Hooda and Yuvraj will have to sit out.

So, should they go with Williamson? Or will it be an overseas bowler? With the destructive Nabi at 5 (he will certainly bat above Bipul), the in-form Agarwal may be the best option. In fact, making him bat at 3 may be the best possible way to utilise him; that way he will always have the cushion of the experienced Henriques and Nabi after him.

This will leave us with two sets Rashid and Sran, and Mustafizur and Tambe. Both seem equally formidable, but Rashid s batting and a gradual decay in Tambe s form will probably tilt the scale in the former pair s favour. While leaving out Mustafizur may sound cruel and perhaps foolish, it must be remembered that Rashid took 9 wickets at 6.11 (average, not economy rate, which was 5.50) in the recent series against Ireland.

The side, then, comprises of five explosive batsmen (one of whom is an all-rounder), a wicketkeeper who can be used as a floater, a utility cricketer, a devious leg-spinner who can hit the ball a mile, and three domestic seamers, two of whom are left-handed.

Who may miss out and why?

Williamson: One overseas player too many.

Yuvraj, Hooda, and Bhui: Bipul will add the extra bowling option Mustafizur and Tambe: The Rashid-Sran pair is better; Mustafizur will definitely be an option going into the tournament, but probably not in the starting XI.

Jordan and Laughlin: Mustafizur, better than them, is missing out.

Vijay Shankar: Tamil Nadu has gone from strength to strength under Vijay Shankar. However, he is more gritty than aggressive, and tends to get expensive with ball.

Siraj, Siddarth Kaul, and Abhimanyu Mithun: They are not good enough to replace any of Nehra and Bhuvneshwar. Kaul may replace Sran, but perhaps not at the beginning.

Cutting: Not in form.

The reserve bench may not end up winning IPL, but with some luck they can beat any of the other seven sides. Yes, Sunrisers Hyderabad are a side that good this time. 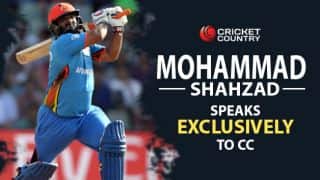 “Cricket is the only thing which drives our nation”, says Mohammad Shahzad