Catch the highlights of the Sunrisers Hyderabad vs Royal Challengers Bangalore, IPL 2015, Match 52 at Hyderabad here.

Royal Challengers Bangalore (RCB) edged past Sunrisers Hyderabad (SRH) in an exciting game of the Indian Premier League (IPL) 2015. Rishad DSouza finds out the major highlights of this close encounter.

Rain plays spoilsport: There was incessant rain after the toss which caused significant delay causing the game to be shortened to an 11-over a side affair. Batsmen were expected to go big in a match of that duration. READ: Virat Kohli, Chris Gayle set up nail-biting win for Royal Challengers Bangalore over Sunrisers Hyderabad in IPL 2015 Match 52

Moises Henriques goes berserk: Henriques was sent in after the wicket of Dhawan. He was in no mood to waste any time before he got going. He cruised to his fifty off 20 balls. He could of course thank the RCB fielders for giving him three lives, the easiest of which was certainly by Sarfaraz Khan at point.

David Warner plays supporting role: For the duration of Henriques’ stay at the crease, Warner was reduced to playing a supporting role but he did so gracefully. He maintained a steady tempo nonetheless and ended unbeaten at 52 off 32 balls.

Rain makes another appearance: A drizzle started descending on the stadium towards the end of the SRH innings, which gradually developed, into a full-fledged rain. The rain ate into the game a little more and altered RCB’s target from 136 in 11 overs to 81 from 6 overs.

Chris Gayle launches: With an asking rate in excess of 13 to chase down, Gayle had the license to murder the ball and he obliged right from the very first ball. He thrashed both Dale Steyn and Bhuvneshwar Kumar in the first couple of overs. He was dismissed for 35 off just 10 balls.

Moises Henriques restores balances: Henriques bowled the third over beautifully to bring the match back in balance dismissing not only the dangerous Gayle but also getting AB de Villiers of successive deliveries. Apart from that, he only conceded just three runs in the over.

Virat Kohli holds his calm: Kohli played beautifully to take his side to victory despite the string of wickets. In the last over, he showed all his class when he dug out two perfect yorkers for boundaries, despite the intense pressure. He scored an unbeaten 44 off 19 balls.

David Warner’s premature celebartion: With 4 to score off 2 balls, Kohli tried to clear the straight boundary. Warner waited, caught it easily, but took a step back in an effort to celebrate. Unfortunately, his boot touched the rope in the process, and RCB were awarded a decisive six. 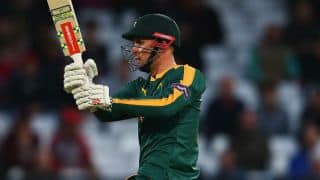