Queensland chased a 399-run target down with 7 wickets to spare against Tasmania on Oct 18.

Queensland successfully chased down the target of 399 runs set by Tasmania at Sydney. Bharath Seervi compiles the various records created and broken in this match.

The day was the second consecutive high-scoring day in List-A cricket. On October 17, 2014, the Momentum Cup match between Dolphins and Knights at Bloemfontein, South Africa, saw some batting records broken – three 150-plus scores, highest partnership of all time and highest total without the loss of a wicket in 50 overs were some of the records. On October 18, 2014 at Sydney, Australia, there were some more batting records created.

In the Matador BBQs One-Day Cup game between Queensland and Tasmania, the former won the toss and elected to field first. Tim Paine and Ben Dunk opened the inningss for Tasmania. The openers provided a steady start to the innings. The score was 39 at the end of tenth over, 78 at the end of 20th over, 114 in 25 and 163 in 30 overs, without the loss of wicket at any of these stages.

The probability of team getting to a score of around 400 was not so high at this stage. Dunk however, had different plans. He completed his century off 93 balls in the 32nd over with six boundaries and four sixes. Paine also reached his century in the 39th over in 118 balls. The partnership was broken in the 41st over at score of 277.

It became the highest partnership for first wicket in limited-overs cricket in Australia surpassing a 33 year-old record 253-run stand of Rick McCosker and John Dyson for New South Wales against South Australia in 1981-82. He was unstoppable after his century, smashing his next 50 runs in 30 balls in the 42nd over. Dunk got to his double century off 142 balls with 13 fours and 11 sixes. He ended the innings with an unbeaten 229 off 157 balls with 15 fours and 13 sixes. Tasmania set a target of 399 to win for Queensland.

The Queensland openers Usman Khawaja and Chris Hartley got their side off to a flourishing start. They added 81 runs in first 10 overs, 156 in 20 overs, 196 in 25 overs, 241 in 30 overs. It looked as if Queensland would cruise to a comfortable victory, which was the case at the end of the match, chasing the target down in 47.3 overs with seven wickets in hand. Both their openers, like their Tasmanian counterparts, posted centuries. Khawaja reached his ton in 70 balls with 14 fours and two sixes in the 23rd over while Hartley got there in 93 balls in the 32nd over.  The opening stand of 280 runs broke the record set by Paine and Dunk, which was created a few hours ago in the first innings.

The chase of 399 runs is the second highest run chase in the history of List-A cricket, second only to South Africa’s chase of 435 runs against Australia in an ODI at Johannesburg in 2006. Overall it was the 12th occasion of a 350-plus run score target being chased down successfully. The table below displays the complete list. It includes three instances of ODIs.

Highest totals in List-A cricket while chasing (375-plus):

It was the eighth time in List-A cricket that a team scored 375 or more while chasing the opposition’s first innings total. Four of those resulted in wins whereas four in losing cause.

Exactly 800 runs were scored in the match but only four wickets fell. It is the sixth time a List-A match aggregated over 800 runs. The highest aggregate is 872 runs between Australia and South Africa at Johannesburg in 2006. The only other ODI with 800-plus runs aggregate is between India and Sri Lanka at Rajkot in 2009.

Highest individual scores by Australians in List-A cricket (180-plus):

Ben Dunk’s 229* is the third highest individual score in List-A cricket and it is the highest by an Australian. He surpassed Philip Hughes’ 202* for Australia A against South Africa A at Darwin in July 2014.

Highest individual scores coming in losing cause in List-A cricket (180-plus):

Four batsmen, all openers, scored 125-plus in this match. It has happened for the first time ever in List-A cricket. 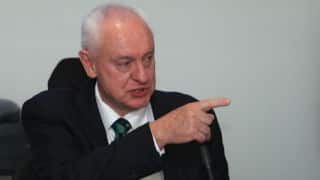