Wicketkeepers are seldom noticed behind the stumps unless they drop a catch or miss a stumping or let go ridiculous byes, that is. It is expected that they would squat after every ball (540 times a day sans wides and no-balls) and go error-free through it, and return with the same vigour next morning.

There was an era when wicketkeepers were seldom expected to deliver with bat. Herbert Strudwick and George Duckworth, supreme glovemen both, batted at No. 11 for significant percentages of their careers.

Things changed over years. Les Ames, the only wicketkeeper with a hundred First-Class hundreds, changed the trend. Imtiaz Ahmed and John Waite followed. In the 1990s, Alec Stewart was asked to keep wickets to boost England s fragile batting order, which meant that Jack Russell, a far superior wicketkeeper, had to sit out. Similarly, Moin Khan kept out Rashid Latif, and Kumar Sangakkara kept wickets.

Adam Gilchrist, by coincidence or design, appeared at the turn of the millennium, and things never remained the same for the glovemen. Nowadays it is expected of them to score runs and act as the all-rounders. Men like Chris Read or Prasanna Jayawardene, thus, never got the run they would probably had in the previous century.

But what about an XI? Let us see how that pans out. Before we begin, let us lay down the methods.

1. To qualify, every member has to have been the official wicketkeeper in at least one Test. This means that Javed Miandad, Justin Langer, and Rahul Dravid will miss out, as will Andrew Hall perhaps a bigger loss, given the balance of the side.

2. The cricketers will be picked based on their overall careers, not matches as wicketkeeper.

Our ploy is simple. If things go your way and you need quick runs at the top, Dilshan will go after the bowlers. If we lose a few quick wickets, Hanif will be there to bat till the end of time. One man to bat at ninth gear, his partner at zero-th (is that a word?). Dilshan will also come in handy with his off-breaks and bowling is something a team of wicketkeepers will need.

Oh, and before you ask, Hanif had kept wickets in his first three Tests.

The top four all average above fifty. In fact, Sangakkara (57.40) and Walcott (56.68) have astonishing numbers. To make things even more ridiculous, Sangakkara got his runs at 66.78 while playing as a specialist batsman and Walcott at 64.66. De Villiers bowls medium-pace, though Walcott (11 wickets at 37.09) was probably better at it. In fact, Walcott is the only cricketer with over 10 wickets and 10 stumpings in Test cricket.

We have Gilchrist at 7. He will come out at 500 for 5 in all likelihood score a 70-ball hundred; our team will declare at 700 in five sessions. If you doubt that, just look at the batting line-up one that cannot accommodate even Rohan Kanhai.

This is where things go horribly wrong, for a bowling attack formed of specialist wicketkeepers can hardly be good.

Reid was an excellent cricketer (among other things, he was a part of the first group to play cricket in Antarctica). Reid bowled both seam and off-spin, and will prove suitable to any condition. He also had a solid technique and could hit the ball immensely hard. He kept wickets only once, against England at The Oval in 1949, but that is enough for us. He led New Zealand to their first three Test wins, so he will also lead the side.

Brown played only 7 Tests, all of them as wicketkeeper. Exactly why he never bowled at Test level remains a mystery, for his First-Class tally read 626 wickets at under 30. He bowled medium-pace, and was good enough to average 30 with bat at Test level.

Brown features in the list of top twenty wicket-takers for Hampshire. Till date he remains the only one to do the 20,000 run-500 wickets double for them. He also had 644 dismissals, 78 of which were stumpings. He was also an outrageous character, but this is not where I should chronicle that.

So good is our team that Storer, our No. 11, averaged 29 at First-Class level, with 17 hundreds. He bowled leg-breaks too, and had 232 wickets to go with his 431 dismissals. For Derbyshire alone he got 214 of these, along with 9,887 runs: those 13 runs would have made him the coveted double.

There were four contenders for the eleventh spot. Tim Zoehrer was kept out (or out- kept) by Rod Marsh and Ian Healy and by Adam Gilchrist in Shield cricket. So he decided to bowl leg-breaks, and topped the averages column on the 1993 Ashes tour. However, his bowling average was almost 47.

There was also Derek Sealy, still the youngest non-Asian Test debutant (at 17 years 122 days), a forceful batsman and wicketkeeper. Sealy bowled medium-pace, took 63 wickets at 28.60, and once had figures of 6.7-2-8-8 when Barbados bowled out Trinidad for 16.

Alan Smith s First-Class bowling average read 23.46 (for 131 wickets). At that level he remains the only wicketkeeper to take his pads off and pull off a hat-trick, bowling off the wrong foot a la Mike Procter.

In the end I decided to opt for the man who averaged 21.47 with ball, bowling seam, mostly in the subcontinent. Asanka Gurusinha took 20 Test wickets at a reasonable 34. He opened bowling for Sri Lanka ten times in his Test career, albeit when they played a phalanx of spinners. He kept wickets against Pakistan in the Karachi Test of 1984-85.

Obviously, everyone can keep wickets, so there will be no need to designate someone. They eleven men will take turns. 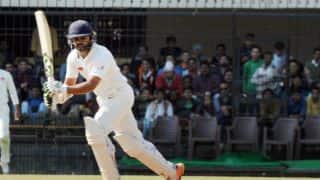 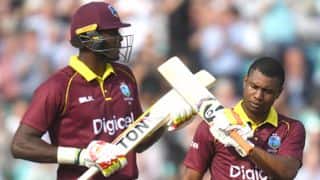