Brendon McCullum came out and decided to play an innings full of uncomplicated joy.

One day after Phillip Hughes’ demise, cricket resumed with as many as four simultaneous international matches. The third Test between Pakistan and New Zealand was lit up by perhaps the best possible tribute to Hughes: Brendon McCullum scored the fastest Test ton by a New Zealand batsman. Shiamak Unwalla looks at an innings that perhaps made the world heave a breath of relief amid insurmountable pain. READ: Phillip Hughes’ death: Cricket resumes, but with a heavy heart

When play resumed on Day Two, Pakistan were well-placed at 281 for three. However, when the players came out on the field, it was obvious that cricket was not the first thing on their minds. After a touching tribute in which the players of each side lay their bats and caps on the boundary line, the players took the field, both sides sporting black bands as a mark of respect. New Zealand went a step further, writing — by hand — the initials PH beneath the fern on the left side of their shirts.

Pakistan were dismissed for 351, adding only 70 runs for the loss of seven wickets. It was a mixture of seemingly disinterested batting and probing bowling. And yet, there was no laughter, no high-fives, no celebrations whatsoever. New Zealand had shot out their opposition, but to a casual observer it would seem that they had done no more than bowl a few tight overs.

But then, something wonderful happened.

Brendon McCullum came out and decided to play an innings full of uncomplicated joy. It was not an angry, aggressive knock. It was not meant to send a message. It was a simple innings. The object was straightforward: see ball, hit ball, do not spend too much time dwelling, and play positively. “Baz” hit fours and sixes almost at will.

When Zulfiqar Babar came on to bowl in the seventh over, he was greeted with two sixes and a four off the first three balls. When Mohammad Talha and Rahat Ali pitched it short, he alternated between pulling the ball over square leg and cutting over point, with the ball sailing away for sixes on each occasion. READ: Phillip Hughes: Rest in peace

He brought up his half-century off 30 balls with successive boundaries. When the spinners gave the ball some air, he used his feet to hit them out of the ground. When they pitched the ball on the leg stump, he went further outside leg and drove it over covers. The pace bowlers were dispatched to all ends of Sharjah.

He got to his ton off 78 balls (once again, amidst almost no celebration), and still showed no signs of stopping. He brought out the reverse sweep, the slog over midwicket, the conventional sweep, the cut. Every shot he played shone of vitality. He remained unbeaten on 153 off 145 balls at Stumps.

McCullum’s innings was a refreshing blast of positivity that has been so grossly lacking over the last couple of days. Thank you, Baz. Thank you for reminding us all, even in our darkest days, that cricket can still bring joy. READ: Hughes’ funeral: Bidding adieu to the “little” giant 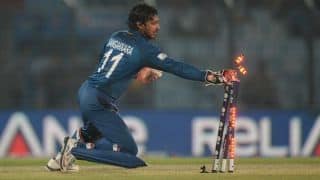