The day of fleet-footed fielders on the Bodyline tour

The day of fleet-footed fielders on the Bodyline tour

Bodyline had been already implemented on the tour, but the spirit was still genial in the NSW match. The fielders seemed to be keener to show off their footwork.

It had been a mere six days since Australia had witnessed the first instance of Bodyline. Douglas Jardine was two hundred miles away from MCG that day, fishing with three friends in the Bogong Valley. Bob Wyatt supervised the act as Harold Larwood, Bill Voce, and Bill Bowes hurled bouncers at an Australian XI with a packed leg-side field.

Larwood hit Woodfull on his chest, but there was little fuss over it. When he would go on to do the same in the Adelaide Test, the response would not be as soft.

The fast bowlers were ready for Bodyline. The blueprint was in place, but all that was still a thing of the future. The spirit of the sport remained intact when the tourists reached Sydney to play New South Wales.

The NSW line-up was a formidable one: Don Bradman was there, of course, as were O Reilly, Stan McCabe, Alan Kippax, Jack Fingleton, and Bert Oldfield. All of them would feature in the series.

But even then NSW were routed in a one-sided match despite the absence of Larwood. They started well, with Fingleton and McCabe took them to 208 for 3. Then they collapsed to 273 against Gubby Allen and Maurice Tate. Then Herbert Sutcliffe scored a colossal 182, three others went past sixty, and MCC piled up 530. Then Voce routed NSW for 213.

There were a couple of incidents worth a mention here. When MCC had played NSW four years before the match, Bradman had been leg-before to Tate for 18. When Bradman made his Test debut immediately after that match, Bradman LBW b Tate 18 was repeated. The exact same entry was repeated for a third time in the first innings of the match in question.

Oldfield, struck by influenza, was replaced by Hammy Love, a substitute, behind the stumps during the match and took no further part in the match. Oldfield would be felled by Larwood at Adelaide as well, and would replaced by Love for the Brisbane Test.

It must be mentioned here that allowing Love to keep wickets was a rare generous act by Jardine on the tour. He would not be as kind, even to teammates, throughout the remainder of the Bodyline series. Love did not carry his wicketkeeping gear, so George Duckworth (of England) lent him his. Such generosity!

There were also some unusual incidents during the match. Henry Theak, a genuinely quick bowler, was not much of a batsman. He was predictably bowled by Allen cheaply, but that was not the end of the story. Such was the impact that a bail reached nearly half-way to the boundary (remember, the Sydney Cricket Ground is reasonably large, and the fence was the boundary in those days).

Voce picked up the bail and tried to throw it back to the wicketkeeper. He failed, despite the fact that he would worry the Australians with his tremendous pace. Perhaps Larwood would have made it.

In between all this, the Sydney crowd found it difficult to pronounce P-A-T-A-U-D-I. They improvised, and the poor prince earned the temporary nickname of Potato

When Wally Hammond was bowling during the first innings of the match, a ball was hit straight at him. Hammond did not bother to stoop. Graceful man that he was, Hammond let the ball hit his boot. A flick of the shoe ensured the ball came to his hand.

This seemed innocuous, but it caught on. Sutcliffe and Allen got involved soon. The Sun correspondent had probably not expected this: Do Sutcliffe and Allen play soccer? During the departure of one of the N.S.W. batsmen, the pair got together, and had quite a little game, Sutcliffe finally passing Allen with a neat piece of footwork.

Things took a new turn when Bradman joined in the fun. He started by stopping a ball with his boot. He was probably trying to do a Hammond. The ball was hit so firmly that the impact with his boot made the ball rise vertically and knock his cap off but the great man still held the ball. Thus buoyed, he tried an encore, and caught it again this time without any contact between ball and cap.

Theak tried to do the same. He tried four times but failed on every occasion before he gave up.

But as always, Bradman sealed the show. With nothing going in NSW s favour, Kippax asked Bradman to bowl. When the ball was tossed at him, Bradman took his cap off, caught it with his cap, took the ball out, gave the cap to the umpire, and came on to bowl his pedestrian leg-breaks. 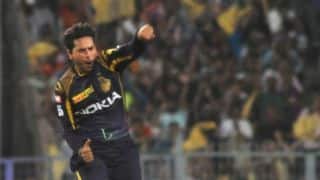 IPL 2018: Kuldeep Yadav is one of the best Chinaman bowlers in the world, says KKR captain Dinesh Karthik