Eleven doubles and a treble later, Richie Benaud had a torrid night, but his agonies were far from over...

June 14, 1953. Richie Benaud, never one of the heaviest drinkers, had got sloshed the night before. However, worse was to follow, as he found out, in the morning. Abhishek Mukherjee recollects a story The Master probably did not have very fond memories of.

Such was Richie Benaud s stature behind the microphone that we sometimes tend to forget what an outstanding cricketer and captain he used to be. At the time of retirement he had most Test wickets (248) for any Australian (he also scored over 2,000 runs). He won 12 Tests as captain and lost 4 (and tied 1), and won 5 series and lost none.

The story dates back to Benaud s first tour of England, in 1953. The first Test of the tour, at Trent Bridge, is remembered for Alec Bedser s masterful display. Bedser took 7 for 55 and 7 for 44 in the match, turning the Test on its head after England conceded a 105-run lead. Rain intervened when England, chasing 229, were 120 for 1.

It was not a memorable Test for Benaud. He was not even the first-choice leg-spinner in the XI: Jack Hill bowled 19 overs for his 3 for 35 in the first innings while Benaud did not get a bowl (but then, neither did Keith Miller). He bowled 5 wicketless overs in the second innings.

He failed with bat as well, though to be fair, Godfrey Evans took a brilliant catch when he actually leg-glanced Trevor Bailey in the first innings. Bedser bowled him in the second innings. He scored 3 and 0. He took two excellent catches to dismiss Tom Graveney (at short leg) and Len Hutton (at gully), but more was expected of a talent of that stature.

However, neither his failure with bat nor with ball matched what awaited him on the rest day of the Test.

Note: Benaud, in an interview with Keith Butler, mentions that the incident happens when he was knocked over by Bedser for 3 that day. In reality, Bailey got him for 3 and Bedser for 0 in the Test. We narrowed down on the second dismissal because it took place on the day before the rest day.

Benaud was obviously in a sombre mood. Till that point he had failed with bat and had bowled next to nothing. He should probably have wanted a drink or two, but then, a Test match was going on; so he resorted to orange juice.

Unfortunately, he was spotted by his captain, Lindsay Hassett. Just like Benaud, Hassett needs little introduction. An immensely popular man and a fantastic batsman who thrived under pressure, Hassett had succeeded Don Bradman at the helm. This would be his last series.

Why are you drinking that stuff? Have a scotch, Hassett insisted.

Now Benaud had little affinity towards that stuff . He mumbled something about an ongoing Test match. Hassett, noticing his reluctance, offered him his own drink. When Benaud complained that it lacked taste, Hassett simply turned towards the bartender and ordered: Give Mr Benaud a double scotch. He thinks this one is a bit tasteless.

But why bother when you have the captain s support? Benaud gave in to the temptations…

It was not the smoothest of nights for Benaud. You see, he had eleven doubles and a treble.

There was no cricket the next morning, but there was a scheduled trip to the Duke of Portland. It was an 18-mile trip, and Benaud was aware there was a chance that he might throw up. He took the seat next to the driver. The plan was to ask him to stop if there was an emergency .

Then it happened. A correspondent of The Daily Mail and his wife were going the same way, so they boarded the coach with the team.

No, Benaud could not afford to throw up on his way to Welbeck Abbey. He sat with gritted teeth, fighting every possible particle from leaving every orifice of his physique. It was the most agonising trip I ve ever gone through, he later confessed to Butler.

Not a mwavellous story, after all. 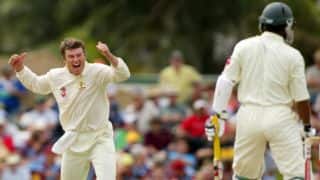