A team of Indian international cricketers who have never played T20 cricket and have featured prominently after 1985.

Every cricket follower would have done his list of all-time XIs; a terrific fun activity which, when done in a group, has the potential to cause some stormy exchanges.

Ever since my love affair with cricket began (in the mid-eighties, 1985 to be precise), I have often indulged in this joy. I have even come up with my most good looking X1s, my most boring X1s and so forth.

In the age of the T20s, here s my choice of an Indian T20 team made up of players from before the period of T20s. I have picked those players who I have watched , and hence, from 1985 onwards.

* They should have all played for India at the international level, either in Tests or ODIs

* They should not have played any T20 at all, not even domestic leagues

So, here I go on my fantasy trip…

Krishnamachari Srikkanth: The original mad man of Indian cricket, a T20 player long before the idea was even born. For a while, between 1984 and 1988, he would have been among the top 5 ODI batsmen of the world. Add in the keen fielding and useful off-spin, and you have a more-than-handy package. Thrills guaranteed.

Who shall partner Srikanth? That wasn t an easy one for me. The mind first raced to Sunil Gavaskar the version from 85 to 87; when he threw caution to the winds and, often, outscored even Srikanth! But do I want to see SMG in a 20-20 slugfest? The aesthete in me revolted against that thought.

So who else do we have Navjot Sidhu perhaps? The clean six-hitting from the 1987 Reliance cup is still so fresh in memory. But sometimes the Sardar could get stuck by not finding the middle gears to operate in.

And so, I went for Raman Lamba. The memories, since rekindled through the odd YouTube videos, are hazy like the grainy Doordarshan feeds through which I had seen him. Yet the memories remain, memories of the gait, the style, the audacious stroke-play, the personality. As a youngster on the verge of entering my teens, I had often wondered why the matinee idols in my favorite sport had to come from across the border Imran Khan, Wasim Akram et al. For a period that was painfully brief, Lamba answered to that longing.

So now that I have the celestial (pun unintended) combo of Messrs Krish and Ram to start off the proceedings, I move ahead to the engine room the middle order.

The first name I wrote down was Mohammad Azharuddin, the touch artist who could also explode with no apparent effort. I have often wondered what kind of a student Azhar might have been particularly in his mathematics class, cause I am of the firm belief, having seen him bat that he would have figured out some unseen angles in every geometrical figure!

He could make a mockery of the field placements, run the fielders ragged and find that extra gear while batting; all with nonchalant ease.

On the field, he looked to be from another planet the speed across the turf, the pinpoint throws, the brilliant anticipation. And before injury, he was also a handy bowler.

At number 4 is Vinod Kambli the enigma. Sigh! just where did it all go wrong? For all his struggles against the rising ball, Kambli should have been given an extended run in the ODIs. The West Indian-like back-lift, the Michael Jackson earrings, the bling and the bluster: they say he was tough to handle, they say he had disciplinary issues. I say watch him tonk Shane Warne for 22 of an over!

At number 5 is Sandeep Patil. Handsome and debonair, Patil was cool before Indians started using the word to define the attributes. The power of the strokes made a charming contrast to the laidback demeanour. A Test career at the highest level didn t materialize despite a couple of outstanding knocks, but Patil will always be remembered for the key role in the 83 triumph.

When the mood seized him and it all clicked, he could win a match off his own bat. Kambli and Sandy would also bring the Bollywood glamour to the group. He was also a handy slow-medium bowler.

At number 5 is Ajay Jadeja cheeky, innovative, street-smart, brilliant fielder, handy bowler, versatile bat. The finisher before the term became popular, Jadeja would also be the leader of my sledging squad on the field. T20 is a game that moves at a breakneck speed; where you need to constantly second guess and be a step ahead of the game who better than Jadeja? Don t agree? Just ask Waqar Younis.

Notable contender: Robin Singh. But for the fact that he has played 2 T20s in UK in 2005, he would have been a shoo-in to this team. For a period in the mid-90s, he was always the last man standing in what would be yet another lost cause, refusing to give up even after the fat lady sang.

Kapil Dev: nuff said! Dynamic cricketer. Destructive with the bat, cunning with the ball and brilliant in the field. The man who could snatch a victory from thin air. My earliest and greatest cricketing hero. Hope, they say, is what keeps this world going. For the best part of my growing up years (cricket-wise), Kapil represented that hope.

That 175 when all was lost, that catch of Viv Richards in the world cup final, that 24 (of 4 balls) to avoid a follow on, that grin, that English he was the epitome of rustic cool. Made in India but for the world, long before Prime Ministers coined that phrase.

Roger Binny: The ambling gait and the gentlemanly appearance hid nerves of steel. Solid is the adjective that comes to mind when I think of Binny. With the ball in hand he could garner prodigious swing and nip off the wicket. A talented batsman who did not do justice to his potential at the international level, Binny could be sent up the order to shake things up a bit. Fantastic fielder in the deep with a strong throwing arm. He also makes it for possessing simply the most exotic name among all Indian cricketers.

The keeper of my fortunes:

There were a few options to consider the steady Mumbaikar Chandrakant Pandit, the man from the East Saba Karim, Nayan Aiga Mongia, the wunderkind Sadanand Viswanath.

But I have gone for the one who was the biggest fighter of them all, Kiran More. Good at standing up to the spinners or back to the seamers (let s forget the drop of Gooch, for Lord s sake pun intended we should not have been bowling first!), innovative with the bat and a relentless exerciser of his vocal chords.

I would pick him just for getting under the skin of Javed Miandad: how many can claim that honour?

Javagal Srinath: Tireless, testing. The whole country implored him, for the majority of his career, to pitch that ball a few inches further up. When he did, in the autumn of his career, he looked far more wicket-taking threatening.

But even otherwise, he was always a serious threat. He could push the best of them on to the back foot with his pace. A Kapil-Srinath tango with the new ball is delicious to conjure up; different in their methods, different in their personalities. Srinath was also a useful striker with the bat early on in his career.

Laxman Sivaramakrishnan: Mystical. That s the word that comes to mind as I close my eyes and recollect Siva at the top of his run up, tossing the ball from one hand to another, surveying the field one last time and then setting off to fool yet another batsman. For the entirety of the 1985 World Series Cup, all eyes were on him. It was no mean feat, considering the tournament featured the likes of Viv Richards, Allan Border, Malcolm Marshall, Imran, Gavaskar, Kapil, Miandad, Martin Crowe, Richard Hadlee and their likes. Loop, drift, turn; he had it all. Pity it all just went away before you could say Siva . He was also a dynamic fielder and later became a useful lower-order bat in First-Class cricket.

Pigeon-toed with an almost balletic grace, Maninder Singh had one of the most rhythmic bowling actions when he started, with some nice loop and turn, and an ability to pick up the big wickets. I will devise a scheme to have him take the field in place of Mr Srinath, whenever the gentleman from Mysore is not needed to bowl.

Several options to consider: Kapil won India the 1983 World Cup, but tact was never his unique selling proposition; Srikanth, praised by all and sundry for how he led the team in Pakistan on a tricky tour; and Azhar, the man who had the longest stint as the Indian captain but never the most enterprising.

I need some chutzpah, I need some cunning; I need someone who will try every trick in the book and then some step up, Ajay Jadeja. 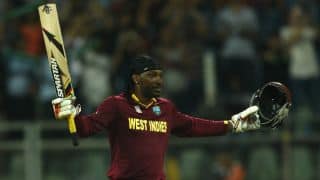 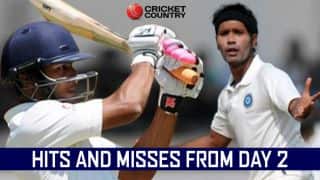