The alleged murky deals between players and the franchises have rocked the Indian Premier League (IPL). In a swift reactionary move, Tadhuri Sudhindra, Mohnish Mishra, Abhinav Bali, Shalabh Srivastava and Amit Yadav have been suspended by the Board of Control for Cricket in India (BCCI). 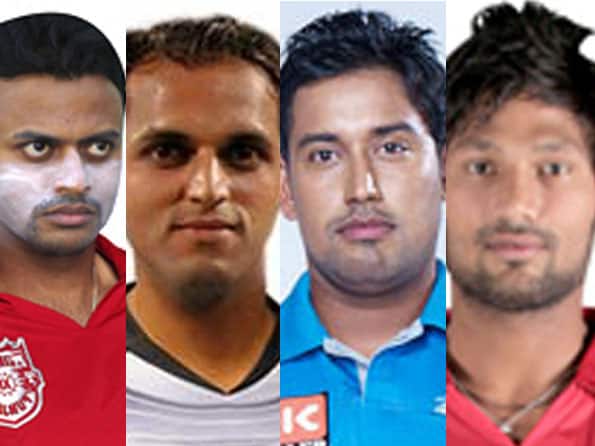 The four who are part of the IPL (from left)…. Shalabh Srivastava, TP Sudhindra, Monish Mishra and Amit Yadav

The alleged murky deals between players and the franchises have rocked the Indian Premier League (IPL). In a swift reactionary move, Tadhuri Sudhindra, Mohnish Mishra, Abhinav Bali, Shalabh Srivastava and Amit Yadav have been suspended by the Board of Control for Cricket in India (BCCI). What has also raised eyebrows about the sting operation by India TV are allegations of the said domestic players being allegedly paid higher than the cap set by the BCCI.

The five men who have been tainted by the controversy aren’t big names in Indian cricket; they are players grinding it out in domestic cricket. Four of the five players figure in the IPL. Bali is the solitary player who isn’t part of any franchise.

1. Tadhuri Sudhindra had a phenomenal 2011-12 domestic season, ending up as the highest wicket-taker in the Ranji Trophy. That performance brought him in the limelight. The 28-year-old right-arm medium pacer from Madhya Pradesh relies on accuracy to pick wickets. In 27 First-Class games he has picked 108 wickets at an average of 22.61.

A lot would have been expected off him by the Deccan Chargers after a fantastic domestic season. But in three games for the Chargers, Sudhindra conceded over 40 runs on all occasions. His T20 career economy rate still reads 6.75. However, he hasn’t replicated the wicket-taking form or the control in the ongoing IPL. Any hopes of improving on those IPL numbers this season have vanished completely with the suspension.

2. Amongst the five, Mohnish Mishra  is probably the most familiar. He has played for Deccan Chargers in the past and has been a part of Pune Warriors India since the 2011 season. Mishra has displayed his talent and has essayed a few destructive knocks. However, he hasn’t been able to cement a place in the Pune line-up and has featured in only one game this season.

Mishra has emerged from age-group cricket as he represented India at the under-17 and the under-19 levels. Some of his under-19 teammates went on to represent India, whereas Mishra has played only 31 First-Class games in a decade long career. He hasn’t done too badly as he averages 44.86. The IPL had given him the opportunity to make a name and probably push for greater things. His destructive abilities attracted interest from the franchises, but he hasn’t been very consistent.

3. The India Under-19 team that won the World Cup in 2000 contained future stars such as Yuvraj Singh and Mohammad Kaif. The most successful bowler for India in that campaign was Shalabh Srivastava who now finds himself in a huge muddle 12 years down the line. Like Sudhindra and Mishra, he hasn’t played too many games at the domestic level. However, a stint with the Kings XI Punjab gave him a new lease of life after being in near obscurity for years. In fact, he hasn’t played for Uttar Pradesh since 2010. More importantly, he hasn’t played a game in the ongoing IPL season.

4. Not much is known about Abhinav Bali, as he hasn’t had the IPL limelight like the others who have been suspended. He plays for Himachal Pradesh in domestic cricket and has a decent record. With the bat he averages 32.88 in 13 First-Class games. His slow left-armers seem to be useful in the shorter versions as he has an impressive economy rate of 6.02 in 16 T20 matches.

Although the four discussed above made their debuts in domestic cricket years ago, they haven’t played too many games. This is because their careers were interrupted due to their stint in the now defunct Indian Cricket League (ICL). A few years ago, a return to the official fold may have seemed a distant conclusion for these men. In the current scenario, with their reputations at stake, a comeback to domestic cricket, let alone the IPL would be an uphill task.

5. Amit Yadav, the youngest of the suspended players, is an all-rounder from Goa who was picked by Kings XI Punjab. He is a right handed batsman and an off-spinner. His record with the bat in domestic cricket is not spectacular, a few games into his career. However, a look at his First-Class bowling record is impressive – 41 wickets in 14 games at an average of 23.75. He made his debut for Goa in 2007 in a T20 game and it was only in 2009 that he broke into the List-A and the First-Class teams.

It is interesting to note that Mishra has said that he made those statements casually and to develop his value.

Srivavastava continues to plead his innocence and says that it wasn’t his voice on the tape.

One can expect a lot of muck surfacing in the days ahead.

Gambhir has been awesome, but KKR has to click as a team to realise their dream