The Ugly XI - Eyesores on the cricket field, but...

The Ugly XI - Eyesores on the cricket field, but...

if there was no ugliness on display on a cricket field to compare it with.

On July 18, I wrote about a XI made up of some of the most eye-pleasing players ever to have graced the game. But let’s face it: we would never be able to appreciate the beauty of their actions, if there was no ugliness on display on a cricket field to compare it with. After all, if there were no losers, there would be no winners either. There would be no greatness in the world, if there wasn’t mediocrity as well.   Having said that, cricket is one of those rare fields, where being called ‘ugly’ can sometimes be a compliment. Just ask Sachin Tendulkar, who probably got the ugliest hundred of his career against South Africa – in particular, against an irresistible Dale Steyn, in what was a contest for the ages – in last year’s Cape Town Test. I’m sure he will rank that hundred above many of his other, aesthetically better centuries. The history of the game is littered with examples of stylists who were darlings of the crowds, but would let the team down with the carelessness that we often see with such performers. On the other hand, there have been several other players who wouldn’t win too many beauty contests, but you would want them on your side if you were heading out to a battlefront.   So, lest you think that this is a list of the worst players ever to set foot on a cricket field, let me correct you at the outset – it’s not. In fact, some of these players are greats of the game, some are even my personal favorites. Even for those who don’t quite qualify as greats, mortals like you and me would do well to remember that, ugly or not, you don’t get to play international cricket unless you are exceptionally good. Let’s just say that they are part of this list for only one reason – if one of them was say 36 not out overnight and looked good to score a century the following day, I wouldn’t exactly be queuing up at the gates to buy tickets! I would rather stay at home, read a book or catch a movie while they win my team the match.   Without much further ado, here’s the Beast XI:

1. Graeme Smith– Whoever came up with the nickname ‘Biff’ for the South African Test captain was spot on. A big tree of a man, Smith has been around for so long, that it’s hard to believe he’s just 30. Both as a captain and a batsman, he has certainly pulled his rather large weight in the side, but even his most die-hard fans would find it hard to put him anywhere in the vicinity of the word ‘elegant’. He might have mellowed as a captain with age, but subtlety is not one of the traits with his batting. Still you cannot argue with a Test average of nearly 50.

2. Gary Kirsten– If there is a batsman in world cricket who has been out more often than Gary Kirsten while edging the ball back onto his stumps, I do not know of it. Not blessed with oodles of flair or the greatest of techniques, Kirsten more than made up for it immense powers of concentration and a work ethic that would flatten most pretenders. The subcontinental sides suffered the most at his hands, but he chose England to write his magnum opus, a 14 and a half hour 275 – then the highest score by a South African and still the second-longest innings in Test history. The soporific quality of his batsmanship was undeniable though.

3. Shivnarine Chanderpaul– The third left-hander in this side, and they say left-handers are born elegant! His stance would appear normal if you thought the bowler was running in to bowl from mid-wicket! But even with the weirdest technique in the world, Chanderpaul has been one of the batsmen of the past decade. He is a living monument to the credo that if you know what works for you, you don’t need a coaching manual to succeed. But for Chanderpaul, West Indies’ defeats in the last decade would have been even more dire than they have been. But while he will certainly walk into any Test side even at nearly 37, you can be equally certain that his batting won’t empty too many bars.

4. Aamer Sohail– Left-hander no. 4! Sohail played the chalk to Saeed Anwar’s cheese in one of Pakistan’s most productive opening partnerships. While Anwar was a delight to watch with his graceful strokeplay, Sohail was decisively less so. Indian fans will best remember him for his altercation with Venkatesh Prasad in the quarter-final of the 1996 World Cup at Bangalore, which ended with the batsman being bowled off the very next ball – not because of particularly brilliant bowling from Prasad, but an ungainly hoick from Sohail. Even his left-arm spin was bowled with an almost robotic action, making him an easy pick in this side.

5. Ijaz Ahmed– If Chanderpaul wins the prize for the most ungainly stance in world cricket, Ijaz Ahmed comes in a close second. Picture this – his feet used to be barely six inches apart when he faced up to the batsmen, and he still found enough space to rest his bat between them! He could give the ball a fearful thump, as India found out in a one-dayer at Lahore when he creamed an unbeaten 139 off just 84 balls with nine sixes, with considerable use of the bottom hand. Never a recipe for elegance!

6. Paul Collingwood– When out of form, Collingwood was unwatchable. When in form, he was only slightly more watchable. Even at his best, it was apparent to all that this was a player who had learnt the art of maximizing his limited talent. The fact that he ended up with a Test average of 40-plus probably surprised him more than anyone else. But whatever his shortcomings on the aesthetic front, ‘Brigadier Block’ will always be remembered for three famous rearguards of 74, 26 not out and 40, not monumental in terms of runs scored, but which nevertheless secured never-shredding draws at Cardiff, Centurion and Cape Town from the jaws of defeat. His greatest effort though, an uncharacteristically brilliant 206 at Adelaide against Australia in the 2006-07 Ashes, ended in England’s most shattering defeat in recent times. His 22 not out in that catastrophic second innings brought a lump to the throat of even a neutral observer like me.

7. MS Dhoni– The Caveman, and I’m not just referring to the hairstyle he sported when he burst onto the international scene. Dhoni is a busy captain, winner of one-day and T20 World Cups, IPL and Champions League titles and leader of the No. 1 Test side in the world, so I suppose he has no time to worry about aesthetics when he has a bat in hand. He has shots all around the ground, but he also plays them in his own unique style. Even his forward defensive is played with strangely bent knees, and don’t even get me started on the helicopter shot! But no matter how agricultural he may seem for the rest of his cricketing days, the defining image of his career will remain the massive six over long-on that sealed India’s World Cup triumph in Mumbai.

8) Paul Adams– Sometimes a picture is worth a thousand words. Enough said. (See pictures above)

9. Debasis Mohanty– Quite a handful in conditions that aided swing, and easy pickings in all other. Debasis Mohanty could have been a perfect candidate for a horses-for-courses selection policy – a must in places like England, New Zealand or South Africa (or Toronto where he first made a name for himself), and better left out of the squad at other places. Sadly, the selectors did not see it that way. Maybe they did not like his action, a whirlwind of arms flailing all over the place, head facing almost skywards at one point in his delivery stride! To his credit though, he is the only bowler I know who could bowl prodigious outswing with an open-chested action, apart from Malcolm Marshall. Illustrious company, that. That is where the comparisons would have to end though.

10. Fanie de Villiers– From a bowler who moved his arms too much to a bowler who barely used his non-bowling hand. Petrus Stephanus de Villiers used to be a javelin-thrower who sustained a debilitating back injury in his youth, which perhaps explains his weird bowling action. But make no mistake, this was a wonderfully crafty and miserly bowler, as an economy rate of 3.57 in ODIs testifies. Among his memorable performances was his decisive role in one of South Africa’s most famous triumphs, a five-run heist against Australia at Sydney in 1993-94, in which he picked up 6 wickets with his side defending 117, including the last one of Glenn McGrath.

11. Corey Collymore– Another bowler with a highly-uncoordinated bowling action. A first look at Collymore would suggest a bowler capable of at least being brisk, but he rarely operated at more than late 70s. He was probably more accurate and steady than several other fast bowlers that West Indies tried after their glory days were over, but a West Indian ‘fast bowler’ who bowled at 75 mph was never going to be around for too long.

12th man, Alastair Cook– England’s one-day captain might be on a Bradmanesque run-scoring spree right now, but that hasn’t cured him of his crab-like technique. At 26, Cook is already a veteran and is almost sure to end up at the top of England’s list of run-getters in Test cricket when he hangs up his boots. But his place in the roll-call of the most elegant batsmen the world has ever seen will surely be closer to the bottom than the top.   Some honourable considerations who narrowly escaped selection were Justin Langer, Matthew Hayden, Steve Waugh, Hashan Tillakratne in batting, Kamran Akmal for wicket-keeping (I almost picked him, then remembered that I needed to pick the ugliest keeper, which is not the same as the worst keeper!) and Andre Nel, Hamish Bennett and our very own Munaf Patel in the bowling department.   So that’s my Beast XI to combat the Beauty XI. Beauty, and by the same logic, ugliness, lies in the eyes of the beholder. So I’m sure you all will have your own picks for both XI’s. Bring them on! 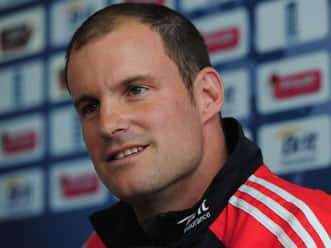 Strauss regards Tendulkar as the best Test cricketer of all time