While West Indies have achieved all the accolades in T20I cricket, they are yet to earn their name back in ODI cricket and what better than an opportunity to revive their name on home soil.

The year 2016 has belonged to West Indies when it comes to cricket. They won the Under 19 Cricket World Cup, ICC T20 World Cup and the ICC T20 Women World Cup. Now, they are back to play some serious cricket with Tri-Nation series. After a topsy-turvy journey, they have reached the finish line and are set to face the mighty Australia at Barbados on Sunday. While West Indies have achieved all the accolades in T20I cricket, they are yet to earn their name back in the ODI format and what better opportunity than reviving the same on their home soil. After controversies with their own cricket board and news making rounds to terminate the team due to lack of expenses, this is the moment for them to come out strong and show what they are capable of doing as a team. FULL CRICKET SCORECARD: West Indies vs Australia, Tri-Nation Series 2016 Final at Brabados

Over the years, the ODI scenario for West Indies has not been fancy enough to boast about. West Indies have played 70 ODI series’ since 2000 and have managed to win just 22 in total out of which 10 were won away while 12 won at home soil. And over the recent past, the condition has only got worse when it comes to the 50-over format.

Their last ODI series encounter before the current tri-series was against Sri Lanka where they were the visitors. It was a clean sweep for the hosts. In early 2015, when West Indies toured South Africa it was almost a similar tale. They were fortunate to win one game out of five in the series. They were playing away most of the time last year and they also played a series against India. India sealed the series with just a game going in favor of the West Indies, while two matches were abandoned.

As soon as the announcement was made of the squad for the Tri-Nation Series against Australia and South Africa, the West Indies team were in for a shock as their key players who were influential in playing their part in the T20 World Cup 2016, Darren Sammy, Dwayne Bravo and Chris Gayle were missing from the squad. What surprised them even more, was the fact that their team-mate Kieron Pollard was back into the ODI squad in spite of not playing ODI cricket for a year. Sunil Narine had also made his way into the squad. A Twitter conversation between Bravo, Sammy, Gayle and Pollard summed it all.

WICB stop Sunil from playing super 50 and now they pick him.

Think the truth.. Or real reasons of expulsion will finally come out??? Have been baffled for 15months.. Then Pingo https://t.co/PlaKS5pj5Z

The controversy was there for everyone to notice and sort of fueled the enmity amongst the teammates. Bravo and Pollard’s friendly banters are known right since when they started playing in the IPL. This time though their shocking reaction over Pollard’s selection in the ODI squad was justified. But as they say, all’s well that ends well. Indeed, Pollard’s inclusion in the squad was a boon. ALSO READ: WI vs AUS, Tri-Nation Series 2016 Final: Predictions and Preview

Road to finale in Tri-Nation Series 2016:

After garnering their name in T20 cricket, West Indies have this one opportunity to make a comeback in ODI cricket as well. Despite the absence of key players, their experienced batsmen and new bowlers have stepped-up to lead them to the final against Australia. Although, major contribution in terms of runs have come from the middle-order consisting of Denesh Ramdin, Marlon Samuels and Pollard, the opening pair of Johnson Charles and Andre Fletcher have just not found their form.

Narine who was criticized for being ineffective after a change in his bowling action, has picked 8 wickets so far in this series and has made a dramatic comeback. New-comer Shannon Gabriel has donned the role of a frontline pace bowler perfectly well in the absence of the experienced Jerome Taylor. Holder and Brathwaite have also chipped in with wickets. If West Indies can deliver a similar performance to the one they gave when they ousted South Africa from the tri-series, beating Australia and making a mark in the ODI format won’t be a difficult job then. 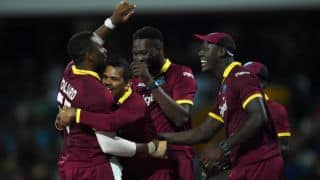