R Ashwin "Mankaded" Lahiru Thirimanne, and his appeal for a dismissal clearly conveyed his mind. Captain Virender Sehwag said at the post-match press conference that a warning had been given earlier to Thirimanne, though not mandated by the laws of the game. 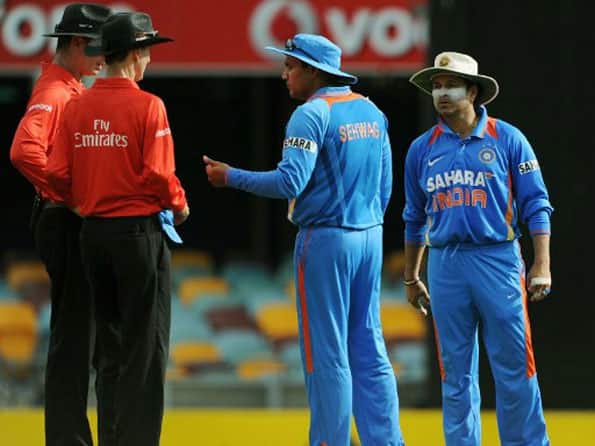 Virender Sehwag (centre) in conversation with umpires Paul Reiffel and Billy Bowden which led to the Indian captain withdrawing Ravichandran Ashwin’s appeal for a run out against Lahiru Thirimanne. The Lankan had backed up too far at the non-striker’s end before the ball was bowled. Sachin Tendulkar joins the conversation © AFP

This Commonwealth Bank Series cricket season seems to be one where the umpires are prominently involved in proceedings beyond their regular or normal duties.

It was the 40th over of the innings in the game between Sri Lanka and India on Tuesday. Lahiru Thirimanne seemed to be taking a walk in the park from his position at the non-striker’s end. Ashwin “Mankaded” Thirimanne, and his appeal for a dismissal clearly conveyed his mind. Captain Virender Sehwag said at the post-match press conference that a warning had been given earlier to Thirimanne, though not mandated by the laws of the game. Ashwin had just started a new spell and had bowled two deliveries to Thirimanne, before the batsman moved to the non-striker’s end with a single.

Clause 15 of Law 42 dealing with “Fair and Unfair Play” states that “The bowler is permitted, before releasing the ball and provided he has not completed his usual delivery swing, to attempt to run out the non-striker”.

Delivery stride is defined as, “the stride during which the deliver swing is made, whether the ball is released or not. It starts when the bowler’s back foot lands for that stride and ends when the front foot lands in the same stride.”

Delivery swing is “the motion of the bowler’s arm during which normally he releases the balls for a delivery”.

Ashwin was within rights to run out the batsman.

The last “Mankaded” dismissal in a One-Day International (ODI) game was in 1992-93 when Kapil Dev sent Peter Kirsten packing at the bowlers end. This was after having given Kirsten two earlier warnings. Unfair of Kapil Dev?  The very same Kapil Dev changed a Dean Jones hit that was declared a four to six runs after the Australian innings had ended, a game which India lost by a run chasing 270 in the 1987 World Cup at Chennai. It was the same World Cup where Courtney Walsh refrained from “Mankading” Saleem Jaffar, a match West Indies lost narrowly to Pakistan.

The appeal from Ashwin was discussed by Paul Reiffel and Billy Bowden, and the latter beckoned Sehwag (shockingly) with a crooked index finger gesture! A gesture more appropriate for a school headmaster calling up an errant pupil! Tendulkar came running to join Sehwag into the discussion and appeared to settle the issue. Appeal apparently withdrawn, game continued.

Do the umpires, Sehwag and Sachin Tendulkar deserve praise for ensuring the game was played within the spirit of the game? Was Thirimanne attempting to steal a single or was it simply a case of being too casual and unaware?

Over 41 from Irfan Pathan again saw Thirimanne walking before the bowler had delivered the ball. In over 45, Vinay Kumar pulled away from delivering the ball and looked at Thirimanne who was again doing his usual ‘walk in the park’, well outside the crease. Bowden was seen motioning to Thirimanne when he was repeating his transgression, but what really were the umpires required to do?

This brings to play, Clause 16 (iv) of Law 42 dealing with “Fair and Unfair Play” which provides, among other powers, for the umpires to award 5 penalty runs to the fielding side if the batsman unfairly attempts to steal a run during the bowler’s run-up. Are three situations of the batsman moving out of the crease with the most probable intent of reaching the other end safely to be brushed aside at the altar of ‘sporting spirit’? Was Thirimanne playing the game within the spirit of the game?

In days and times when technology is used to determine the most marginal of run-outs, is not a foot or even an inch gained at the bowler’s end a huge gain at the wicket keeper’s end? Is it then probably the time to remove the negativity surrounding the “Mankaded” dismissals and make it a perfectly legal dismissal devoid of any moral or ethical stigma?

Curiously, a Mankaded delivery does not count as a legal delivery, even if the batsman is declared out!  The recent Celebrity Cricket League final saw the Karnataka team take offence to the Chennai side “Mankading” a dismissal in the penultimate delivery of the close game, an action that reportedly forced the Karnataka side not to show up at the awards ceremony!

The bad taste in the mouth in this game was, however, the manner in which an officiating umpire beckoned the captain of the Indian team for a discussion! Time to take ugly crookedness out of the game!