Even in the Indian side, MS Dhoni has frequently teased his players.

Tinashe Panyangara was suspended for “disruptive behaviour” following his side’s loss to Australia in the opening match of the Zimbabwe Triangular Series 2014. Shiamak Unwalla looks at the sanction placed on him.

There are two types of people on the planet: those who can laugh at themselves, and those who cannot. The ones who do possess the rare ability to chuckle at their own shortcomings are invariably the ones who are able to sleep more soundly at night. It is the other kind, the ones who take even the most innocent gag at their expense to heart, that often miss out on the funny side of life simply because they miss out on the joke.

It seems that the Zimbabwean Cricket (ZC) unfortunately belongs to the latter category: ZC expelled Panyangara from the squad due to ill-discipline and ‘disruptive’ behaviour during the team’s training session. ZC have not given an official reason for his suspension, but sources have revealed possible grounds for it.

Consider this: Panyangara allegedly decided share a video of Mitchell Johnson’s deadly spell in the Australian leg of the Ashes 2013 (aka the “Winter Ashes”) on the team’s WhatsApp group. This was after Zimbabwe’s 198-run trouncing against Australia in the first ODI.

Johnson, the hero of the 2013 Winter Ashes, bowled a miserly spell of 6-2-7-1 in Zimbabwe’s innings of 152. Now, the object of Panyangara’s stunt could have been anything from teasing the way his teammates had dealt with Johnson to simply showing them how not to play him. However, the authorities reacted with extreme prejudice. Again, this is not proven and it would therefore be premature to comment on the issue.

That being said, talking on a hypothetical level, if a player does somehow hurt the feelings of his teammates by poking a bit of — seemingly harmless — fun at them, does it really merit such severe action? When one thinks of the camaraderie shared by the Australian and South African teams, the very idea seems absurd. The likes of Mark Boucher and Jacques Kallis frequently pulled each other’s legs. Likewise, there seems an almost perpetual Twitter battle (albeit a good-humoured one) between David Warner and his teammates.

Even in the Indian side, MS Dhoni has frequently teased his players, sometimes on the field; and we will not even discuss Ravindra Jadeja here.

The fact is, players poking fun at each other is just part and parcel of the game. If it will be met with bans and sanctions for ‘disruptive behaviour’ by the boards, it will make cricket a rather dull game. 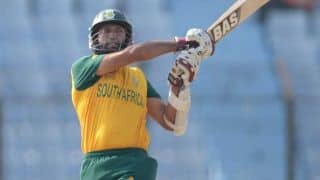