If you thought Chris Lynn pulled off the most stunning catch, here's a list of other sensational catches in IPL.

Chris Lynn’s spectacular catch in the Indian Premier League (IPL) 2014 has sparked the debate about the best fielding efforts yet again. Nishad Pai Vaidya writes about some of the best catches in IPL history.

Chris Lynn’s catch against the Royal Challengers Bangalore at the Indian Premier League (IPL) 2014 has sparked the debate yet again. Which is the best catch taken in IPL history? CricketCountry went through the archives and found a few brilliant ones that left the spectators stunned. Here is the list.

This was during the Indian Premier League (IPL) 2010 when AB de Villiers was a part of the Delhi Daredevils. Against the Royal Challengers Bangalore at the M Chinnaswamy Stadium, Delhi had smashed 183 and were in a zone of comfort when the opposition were 137 for seven in the 18th over. With the game moving along, de Villiers lit up the arena with a screamer. Praveen Kumar made room to Umesh Yadav and flat batted it towards long-on. De Villiers initially seemed to misjudge it, and had taken a couple of paces forward. Realising that it was sailing over him, de Villiers jumped with his hand outstretched and clutched it with one hand. He landed much closer to the boundary, with the ball’s momentum taking him back. It was a remarkable catch considering how he made up for the misjudgment and the spectacular airtime.

Taylor has a bit of a swagger, and when he hits, they stay hit. When Kings XI Punjab faced the Pune Warriors India at Pune in the IPL 2013, the game was one-sided with the tourists taking charge. It was personified by Gurkeerat Singh Mann‘s magnificent effort. Taylor walked across the stumps and swatted it to fine leg. Gurkeerat was in the deep, but was a little square. He ran towards his left and dived with his hands outstretched. Mid-air, Gurkeerat latched on to a ball that was traveling at some speed and then came to the ground as his teammates celebrated. The way that ball was hit, it had a boundary written all over it. Gurkeerat simply made the impossible, possible.

3. David Hussey palms one over the boundary and dives forward to take the catch

David Warner and Paul Collingwood were playing for the Delhi Daredevils and had plundered the Kolkata Knight Riders. After getting his fifty, Collingwood decided to smash it. He charged down the track and hit it towards long-on. It was sailing over David Hussey, who caught it over the boundary, and as he was crossing the ropes, palmed it back into play. Once he regained his balance, he dived back onto the field of play to take it inches off the ground.

4. Chris Lynn announces himself at the IPL with a spectacular effort

Lynn was an unknown player when he came into the IPL 2014, although he was a part of the Deccan Chargers and then Sunrisers Hyderabad in the previous season. He smashed 45 to take Kolkata to 150 and when they were defending it, he was the one who helped change the game. With six to get off three balls, de Villers smashed Vinay Kumar towards mid-wicket. Lynn slipped while moving forward, and saw the ball would beat him to the ropes. He then lunged back as the ball came down and held it mid-air. While landing, he ensured he curled his body, so as to avoid contact with the ropes. That was game set and match for Kolkata!

In an IPL 2012 match between Pune Warriors India and Rajasthan Royals, Johan Botha and Ajinkya Rahane pulled off something stunning. Rahul Sharma, the Pune player, lofted the ball to long-off, with Botha running back to take the catch. He took it alright, but was moving towards the boundary at some speed. Watching Rahane behind him, he just passed it on to him as a magnificent catch was completed. This was the perfect example of teamwork.

6. David Hussey sends Chris Gayle back with some brilliance

The game was gone! Chris Gayle’s innings of 87 had put Bangalore on the course to victory againsty Punjab in the IPL 2012 at Mohali. However, there was a short smile for Punjab. Gayle absolutely smashed one through cover, but Hussey dived to his left and held it with one hand. What made this catch difficult was how hard the ball was hit and how little time Hussey had to react and tune his body.

7. Abhimanyu Mithun gives Kieron Pollard a taste of his own medicine in IPL 2011

The assassin became the victim on this occasion. All the batsmen who fell to Kieron Pollard’s brilliance would have prayed for him to get a taste of his own medicine. Bangalore had reduced Mumbai to five for 89 in the 13th over in pursuit of 186. Pollard was Mumbai’s final hope at the crease and he lofted Daniel Vettori high towards long-off. Mithun was centimeters from the boundary ropes as he tried to balance himself underneath the ball. The Mumbai Indians dugout behind him cleared as they expected the ball to land where they were sitting. Mithun maintained his balance as he plucked the ball with his right hand just over the boundary. He made sure he did not fall over as he managed to hold on to the skier with one hand. Pollard inflicted this on several batsmen in this tournament and in his final innings of the season, he was made watch it happen to him.

Ponting returned to the IPL after five years, but had a torrid time with the bat. However, there was one moment that remained etched in the fan’s minds. With his old nemesis Harbhajan Singh bowling to Unmukt Chand, Ponting unleashed his old athleticism. Chand was done in by one that held its line and he got the outside edge. It was going away from Ponting at cover, but he ran across, dived and took it mid-air. And if that was unbelievable, scenes of Ponting hugging Harbhajan would have stunned you even further!

9. Harmeet Singh helps Deccan Chargers get closer to the title in 2009

Harmeet Singh was fielding at fine-leg in the penultimate over as Deccan were strangling Bangalore in the final at Johannesburg. Vinay Kumar moved across his stumps and scooped it to fine-leg off Ryan Harris. Harmeet had to come in and then dived forward to take a magnificent catch. Considering the pressure and the rate at which the ball was traveling, this was a tremendous catch.

Kings XI Punjab were going nicely at 128 for two in 15.2 overs when Kieron Pollard pulled off this stunner to dismiss a dangerous looking Shaun Marsh. Marsh hit the ball with all power to mid-wicket and looked like clearing the ropes. Pollard, who was standing a bit square, ran towards the ball and was actually flying when he took the catch to his right. Pollard had to look at the ball over his shoulder while running towards which made this catch even more difficult. It looked like a certain boundary, but from nowhere you could see a man brave all odds and get hold of the bullet! When he caught it he just stood there with his arms raised towards the Mohali crowd. 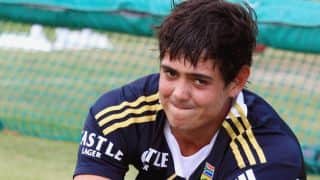