West Indies Under 19 won their first ever ICC Under-19 World Cup title on Sunday, covering up for the defeat against Pakistan at Dhaka, Bangladesh in 2004

What an eventful tournament ICC Under-19 Cricket World Cup 2016 turned out to be! With unexpected teams making their way in this year’s semi-finals and final, the cricket fraternity got hooked to the teenagers as the tournament reached its business end. When the whole world (well, barring the hardcore cricket fans) was celebrating Valentine’s Day, Indian and West Indian boys were preparing to bask the glory of success. The entire nation witnessed young Caribbean teenagers dancing away winning their first ever ICC Under-19 World Cup title, covering up for the defeat against Pakistan on same ground in 2004. That moment of victory meant not just holding the cup high but giving their future a heads-up. India’s loss has deeply hurt every true fan in India and in turn those heartfelt messages have reached every young boy in the team. READ: Keacy Carty outshines Mayank Dagar to help West Indies beat India in ICC Under-19 Cricket World Cup 2016

Back in 1988, the inaugural edition was named McDonald’s Bicentennial Youth World Cup, formed part of Australia’s celebrations for Australia Bicentenary, providing international cricket some future stars — Nasser Hussain, Michael Atherton, Chris Cairns, Venkatapathy Raju, Mushtaq Ahmed, Inzamam-ul-Haq, Sanath Jayasuriya, Brian Lara, Ridley Jacobs, Jimmy Adams, and more. As the tournament went ahead it was renamed ICC Under-19 World Cup (in 1998), and Test-playing nations made their entry to this tournament, giving opportunities for emerging talents, especially from teams outside the Test arena. These nations have outgrown themselves with time: in 2004, for example, Enamul Haque of Bangladesh was the highest wicket-taker with 22 wickets.

Of all editions played of Under-19 World Cup tournament, Australia have won three, India three, Pakistan two and South Africa one (the previous edition in 2014). The quality of cricket in the 2016 edition, both with bat and ball, has been exemplary — despite the absence of Australians. It is a difficult task is to name a mere ten bowlers from the lot, but here they are:

1) Mayank Dagar (India): When performance and hard work speaks for a young, aspiring cricketer, the task is completed. Dagar’s records spoke for him, and he trended on social media throughout the tournament. Matthew Hayden went on to Twitter to express laud Dagar, with World Cup being the perfect medium to showcase his budding talents. His best figures of 3 for 21 in World Cup 2016 came in the final, when India was in dire need for a miracle to take place. READ: ICC Under-19 World Cup 2016: India unearths its next generation of superstars

2) Wiaan Mulder (South Africa): South African bowlers from the past Under-19 match made way to the national team like Wayne Parnell, highest wicket-taker in 2008, Kagiso Rabada from 2014, and more. Though the defending champions were knocked out early, some talents cannot be erased off. Mulder remained got 3 wickets against Bangladesh, but his best haul were 4 for 14 against New Zealand.

3) Michael van Lingen (Namibia): Namibia purely stand out for their roaring success against defending champions South Africa, who completely turned the game around. Not only did van Lingen rip through the Proteans with 4 for 24 against South Africa, he did a wonderful job throughout the tournament. READ: India advances to semi-finals of ICC Under-19 Cricket World Cup defeats Namibia by 197

4) Rory Anders (Ireland): Anders finished as the third highest wicket-taker for this tournament, helping Ireland reach 13th position in Under-19 World Cup 2016. It does not say much of him, but at least he saved Ireland from further ignominy. Anders’ best figures were 4 for 21 against Canada for the 13th-place semi-final match.

5) Alzarri Joseph (West Indies): When you think of West Indies, one is compelled to remember the horrendous start India faced in the finals with three down in a short span of time. Joseph has been outstanding in this entire tournament with perfect bounce, pace and movement from his innings, and helped restrict Bangladesh in the semi-final. His best figures of 4 for 30 came in the quarter-final against Zimbabwe, marred by the ‘Mankading’ incident. Alzarri Joseph help West Indies restrict India to 145 in ICC Under-19 Cricket World Cup

6) Hasan Mohsin (Pakistan): Pakistan have won Under-19 tournament twice, and have given some excellent cricketers like Anwar Ali, who played for their nation. This year they produced the same magic to ensure they proceeded to the finals to get their third win. Mohsin, in particular, was very special player. If he sticks to his form, he has a bright future ahead of him. His finest spell came against Nepal, when his 4 for 42 was enough to get Pakistan the 5th slot.

7) Mohammad Saifuddin (Bangladesh): Bangladesh were bound to receive immense support from their country while playing on their home ground, though they missed the opportunity to make it through the final after struggling in the semi-final, and earned the third spot with grace against Sri Lanka. While their skipper Mehedi Hasan Miraz named Man of the Series, Saifuddin kept producing the breakthroughs. His best figures were 3 for 17 against Scotland in 13th group match. READ: Bangladesh beat Nepal to reach ICC Under-19 Cricket World Cup 2016 semi-final

8) Avesh Khan (India): Avesh has been the best bowler for India, but comes lower the order only because Dagar’s tremendous performance in the final. However, Avesh needs to receive credit for helping India emerge into the finals once again. He is yet another player who requires no introduction and his performance speaks for himself.

9) Sandeep Lamichanne (Nepal): Love them or hate them, you cannot ignore the boys from Nepal. They have been fantastic and entertaining, and have played the tournament in great spirit. Nepal have immense potential, and certainly underperformed in the tournament. Lamichhane was a talent who received appreciation for every game he played the best. He also took a hat-trick during his 5 for 27 against Ireland. Nepal have bowlers who have shown they can go ahead much beyond expectations. READ: Raju Rijal responds to age-fraud allegations

10) Cakacaka Tikoisuva (Fiji): If one wonders what the name really denotes, one will fail to understand why Tikoisuva deserves every bit to be in Top 10. Fiji failed to move beyond 100-plus runs every time barring once. Tikoisuva was their only bowler of class, and at time of need an important batsman. His best came against eventual champions West Indies, when he claimed 6 for 59. The list of top ten bowlers will look incomplete without mentioning Tikoisuva in the lists. 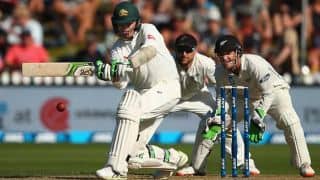 Peter Siddle doubtful for New Zealand vs Australia, 2nd Test at Christchurch due to back spasms