There can be some situations in cricket, very legitimate ones, that might confuse the most diligent followers of the game. In this series we look at several such scenarios. In this particular episode Arunabha Sengupta wonders how a batsman can get runs after hitting a ball twice.

There can be some situations in cricket, very legitimate ones, that might confuse the most diligent followers of the game. In this series we look at several such scenarios. In this particular episode Arunabha Sengupta wonders how a batsman can get runs after hitting a ball twice.

Hitting a ball twice is a rather rare method of dismissal.

(a) The striker is out Hit the Ball Twice if, while the ball is in play, it strikes any part of his person or is struck by his bat and, before the ball has been touched by a fielder, he wilfully strikes it again with his bat or person, other than a hand not holding the bat, except for the sole purpose of guarding his wicket.

(b) For the purpose of this Law, struck or strike shall include contact with the person of the striker.

The additional point to remember is that the bowler does not get credit for the wicket.

Rare though it obviously is, batsmen have indeed got out in this way. The first time this happened was during the Hampshire-Kent match at Windmill Down in July, 1786. Tom Sueter, the famed batsman of Hampshire, was recorded in Arthur Haygarth s Scores and Biographies as out hitting the ball twice for 3.

It is the third-rarest method of dismissal after retired out and timed out, and has been recorded just 21 times in the history of the game. The most recent example was when Kurt Wilkinson was batting for Barbados against Rest of Leeward Islands in the 2002-03 Red Stripe Bowl, when he was given out in this manner although doubts lingered about whether he had struck the ball intentionally.

In 1906, John King of Leicestershire was dismissed against Surrey at The Oval when he stopped the ball from going on to the wicket by tapping it for the second time. This much was okay. The mistake King made was in trying to go for a run after that. One cannot hit the ball twice unless it is only to stop the ball from going to strike the wicket. By going for the run, King changed his intention into trying to score runs and was given out.

However, during a cricket talk delivered to the Portsmouth Umpires Association, Arthur Gilligan was asked a contradictory question and required to give an instant response. The question was, How can a batsman hit the ball twice, yet score runs and not be given out by the umpire?

Indeed, there is a way. And if Gilligan is to be believed, he did manage to answer the question immediately.

Please think about it and then scroll down for the answer.

Suppose a batsman plays a ball, and then stops it with his bat as it tends to go towards the wicket. That much is within the rules.

Now imagine the batsman seems to be standing out of his crease at the end of the second stroke, without trying to go for a run. And a close-in fielder tries to pounce on this opportunity. He picks up the ball and shies at the stumps. But, he misses and the ball disappears into the outfield. In this case, it is legitimate for the batsman to run overthrows without being pulled up for hitting the ball twice.

Yes, cricket can be complicated. 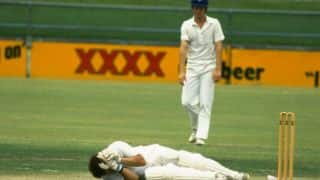