Mohammad Hafeez's knock stabilised the Pakistan innings and ensured that his team beat India on a tough pitch.

Mohammad Hafeez composed a fine 75 against India in the Asia Cup 2014, on a tough surface at the Mirpur’s Shere Bangla Stadium. It was the sixth match of the tournament and things were really pepped up as two of cricket’s greatest rivals were set to confront each other. Things looked tough for the batsman right from the onset. Most batsmen struggled, but Hafeez played a very sedate innings. When India had managed to score just 245 runs on the board, it looked like Pakistan would win comfortably, but it was far from the case and only because of Hafeez did Pakistan manage a one-wicket victory in the end. Live Cricket Scorecard: India vs Pakistan, Asia Cup T20 2016 Match 4 at Dhaka

Hafeez mixed confidence and patience as he went out tackling the spinners, on a surface where turn and grip was abundant. Even the fast bowlers were reaping rewards since the ball was getting held up on the surface. But Hafeez composed a meticulous knock as he went about his duty. He bothered himself more with preserving his wicket and building partnerships than going berserk in attempt to be the hero. ALSO READ: India vs Pakistan, Asia Cup T20 2016 Match 4 at Dhaka, Preview: Arch-rivals meet again in key clash

After his dismissal, it was Shahid Afridi who took the lead and in light of the surging run rate, bludgeoned the ball to all parts of the park en route his unbeaten 18-ball 34. Afridi’s knock would have been of little value had Hafeez not set himself in to steady the Pakistani innings. Ultimately, it was a highly electric affair with Pakistan managing to win the game by only one wicket and just two balls to spare. The match was a truly exciting affair.

Mohammad Hafeez 75 vs India by harris222

Haffez’s knock was full of composure and patience. A big defeat could have befallen Pakistan had they not dug in. 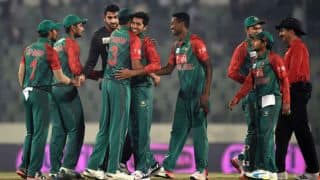 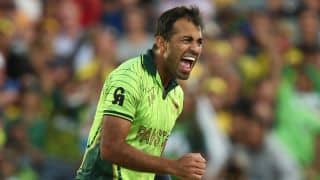