Had Alastair Cook declared about 10 overs earlier, Virat Kohli and his men could have been in a spot of bother.

Contrary to expectations, India and England played out a draw at Rajkot, putting to rest all speculations of a 5-0 whitewash by India. England had toured Bangladesh before coming to India. While they drew the Bangladesh series, they also got some time to adjust themselves to rank turners and similar weather conditions. The experience definitely helped England in the first Test at Rajkot. If anything, they were the better side in the Test: they piled up 537, acquired a 49-run lead, batted comfortably in the third innings, and took 6 fourth-innings wickets before time ran out. Had Alastair Cook declared about 10 overs earlier, Virat Kohli and his men could have been in a spot of bother. Full Cricket Scorecard: India vs England 1st Test at Rajkot

Thankfully for India, that did not happen, though they were outplayed by England for most of the Test. They had dropped three chances inside the first hour of the Test, and those were not their only lapses. Four Englishmen slammed hundreds, all of them with a strike rate over 50. Adil Rashid took more wickets than Ravichandran Ashwin and Ravindra Jadeja put together. In other words, unexpected things happened throughout the Test.

But this is not about the proceedings. This is about the confusing approach of the two captains. The first innings for both sides went without fuss. Then Cook and Hameed walked out to open in the third innings of the Test with 37 overs left on Day Three. READ: IND vs ENG 1st Test, Day 5: Highlights

It has been often mentioned (and justifiably so) that one of England s strengths is their bottomless batting line-up. England s first recovery, from 102 for 3 to 343 for 5, was led by Joe Root, Moeen Ali, and Ben Stokes, in other words, men who batted between 3 and 6. But the last 5 wickets also added 194, which turned out to be extremely crucial. Indeed, every single man in the batting line-up has at least one First-Class hundred, and barring Zafar Ansari (who played his second Test) everyone averages 20 with bat.

In other words, England, with a tremendous batting unit with an army of explosive batsmen throughout the line-up, had a day and 37 overs to push for victory. Cook looked uncomfortable in Jadeja s first over (second of the innings) but found his groove, but England were perfectly happy to bat along at 3 an over, finishing the day on 114 without loss. READ: India vs England, 1st Test: Resilient Virat Kohli harbours India to an anxious draw

A run rate of 3 is certainly not poor, but is certainly not what a side should score at, given that (a) they want to declare, (b) time was running out, and (c) they have enough batsmen in their line-up to feel safe.

But perhaps he wanted to keep wickets to launch an all-out attack the morning after. They led by 163, had 9 wickets in hand, and had the entire day: in other words, they were in charge of the day ahead of them.

Day Five started on a bizarre note. The first 7 overs fetched 13, of which the solitary boundary came off a thick edge past gully. It would have been sensible batting under usual circumstances. But the situation demanded taking risks, for every aspect (lead, wickets in hand, the quality of batsmen left) screamed for quick runs.

There were boundaries, some of them quite delectable, here and there, but barely a sense of urgency. It was as if Cook did not want to win. The first 21 overs of the morning fetched 65, a bizarrely low score.

Cook did not promote Stokes when Hameed fell. Root walked out. Though Root can score at a remarkable pace as well, his strike rate is nowhere comparable to Stokes s. Cook had probably decided to bat out and wait for the second Test. READ: India vs England 1st Test: Alastair Cook defends his decision to declare post lunch on Day 5

But Root came out and perished, attempting a slog, and Stokes was promoted. Soon afterwards, the television camera panned on to Jonny Bairstow, padded up, all set to come next. Both Ben Duckett and Moeen were held back.

It was baffling: if Cook wanted quick runs, why did he not start the onslaught earlier? Why wait for so long? What use was his long batting line-up if more than half of it remained unutilised?

At this stage England led by 241. They had 8 wickets in hand. The day had seen 24 overs, which meant there were 64 left (after deducting 2 overs for innings break). That meant an asking rate of 3.77 for India. Any captain in the 1980s, or even the 1990s, would have declared; but this was the era of T20s, when 400s have become commonplace in ODIs, and India had almost chased down a higher target in a T20I against the world champions earlier in the year.

On the other hand, England needed a wicket every 38 balls. It was not easy. There was turn in the pitch, but it was certainly not unplayable for men who have been brought up under these conditions.

The match continued. The first boundary came after 24 balls, that too when Mohammed Shami somehow lost sight of the ball. England went to lunch at 211 for 2 in 66 overs. The target would have been 260 in 61 overs if they declared at that stage (no overs lost if you declare at lunch, remember?). Surely India would not be able to chase at 4.22 an over?

The first 4 overs after lunch fetched 15. But the Englishmen were not the only ones at fault, for Ashwin had switched to over the wicket and had restored to a line way outside leg. In other words, Kohli had decided to stem the flow of runs. READ: Kohli says he expected much better fielding effort from his side

This, just like Cook s slow-go policy, made little sense. While England had to declare in order to win, the same held for India: an Indian victory was out of question unless England declared.

But Kohli decided to delay England s declaration for some reason. The strategy is typically adopted by fielding captains on the fourth day, not in the penultimate session of a Test. It was an unusual step for a captain who had decided to chase 364 and had refused to give up after 57 for 2 less than two years back, at Adelaide Oval.

Cook had refused to take risks when the onus was on him to push for a win, but Kohli did not help proceedings by slowing things down, either. The captains both of whom had played at least one brilliant innings each in the Test were at fault for the delayed declaration. Kohli then another card by taking an unnecessary review: the intent was clear.

By then Cook and Stokes were going all guns blazing. The declaration was clearly around the corner, but few expected it to happen the moment Cook got out.

Did Cook really wait for his dismissal? What sense did that make? England had to chase a mere 99 by Pakistan at Abu Dhabi last year, but time had run out after 11 overs. England finished on 74 for 4. Cook, having scored a mammoth 14-hour 263 in the first innings, held himself back till the end. On that occasion he had sent in Moeen and Jos Buttler, and had followed them with Root, Stokes, Bairstow, Ian Bell but did not emerge himself.

In other words, Cook was aware that he was not the fastest scorer of the side. That tag would probably belong to Stokes, the man at the other end. A declaration at Stokes s dismissal would have made sense, but Cook s?

India needed 310 from 49 overs. A few decades back it would have been classified as a token declaration. Perhaps Cook was wary of Kohli s phenomenal form, especially during chases in limited-overs cricket. Perhaps he took into consideration that India, too, can bat until No. 9, while ten and Jack are outrageous sloggers. Photos: India vs England 2016 1st Test at Rajkot

India made their intentions clear early on, not scoring off the first 23 balls they faced, during which they lost Gautam Gambhir. Murali Vijay and Cheteshwar Pujara, both first-innings centurions, started in a flurry of boundaries before shutting shop.

And just when it seemed nothing could go wrong, Rashid claimed Pujara. Even then, India were 49 for 2 at tea. A victory was ruled out, and it was perhaps beyond England s scope to take a wicket every 23 balls.

Vijay played needlessly to one from Rashid that pitched outside leg. And Ajinkya Rahane, perhaps India s finest batsman in whites, was clean bowled trying to cut an off-break that turned to hit his leg-stump (yes, it was that inexplicable a stroke). Suddenly India were 4 down, with 152 balls to play out.

Moeen and Rashid looked more and more dangerous with every passing over. Ashwin had already played a valuable innings in the Test, but he had batted only 6 times in the fourth innings of a Test in his career till then. Not for the first time in his career, it all depended on Kohli.

Cook took Rashid off with 19 overs to go, bringing on Stokes, a champion of reverse-swing. Moeen continued. At drinks India had to survive 15 overs or an hour, whichever lasted longer.

Then Cook did something extremely curious: he opened bowling with Ansari and Root after drinks. He let 4 overs go by. The ball that eventually got Ashwin was well outside off. Three boundaries earlier in the over (yes, Ansari had been wayward) had probably drawn Ashwin into a false sense of security.

Even after Rashid replaced Root, Ansari continued at the other end. And then Moeen replaced Rashid, to allow the leg-spinner a change of ends after he had bowled a single over

It took Rashid 3 balls to remove Wriddhiman Saha. Had there been no Root after tea it might have taken less. And though Jadeja cut Rashid against turn (a shot that had cost Rahane his wicket against Moeen) he got away with them every time.

But it was not over. With a shade under 10 minutes left (England were already done with their 49) Kohli lofted Moeen over mid-wicket to reach 46. Then, for some inexplicable reason, he hit one that went up almost vertically, only to land safe some distance behind the bowler.

Nothing would have come off that shot. Nothing. Even if it had fetched him four, even six, it would not have mattered, for it had come down to seeing off those 13 balls.

And then, off the last ball of the next over, Jadeja lofted Moeen against the turn when it was evident that there would be exactly one over after that, no more, no less

Indeed, it has been a day of bizarre cricket. Hard cricket, some excellent batting and bowling performances, but indeed, without a doubt, bizarre. 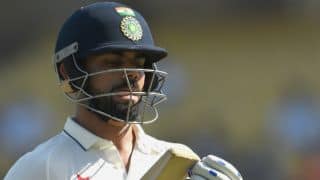