As far as England are concerned, Virat Kohli has mere one century 103 at Nagpur in December 2012.

Just a glance at Virat Kohli s impressive Test record will highlight the Indian run-machine s poor showing against two sides in particular England and Bangladesh. Nonetheless, the home season for India provides him an opportunity to set things right. Being a player who invariably shines on big occasions, Kohli has had an extremely poor run against England in particular an opponent which has been toughest to face for India home and away. A poor average of just above 20 after as many as 9 Tests against England certainly throws a challenge against the Indian Test captain, who has a massive challenge of turning the tides in the upcoming five-Test series. Full Cricket Scorecard: India vs England 1st Test at Rajkot

Kohli s career average in Test cricket might not be around 50 but the right-hander has enjoyed success against almost every side, both home and away. Against Australia, Kohli already has 5 away centuries whereas he averages a very healthy 47.20 against South Africa after 6 Tests, including one immaculate away century. But as far as England are concerned, Kohli has mere one century 103 at Nagpur in December 2012 which was an unsuccessful and desperate attempt for India to avoid a mortifying series defeat at home. His second highest score against the same opponents has been 39, which gives an unpleasant picture in Kohli s sparkling Test career.

Come November 9, when India clash against their toughest opponent in Test cricket, Kohli and his team will face the heat of putting up a show which none of their former sides were able to. In 2011, India were blanked 0-4 in England with the batting order having all-time greats like Sachin Tendulkar, Rahul Dravid and VVS Laxman. Kohli may not have even made his Test debut back then, but when England came around in 2012-13 for another four-Test series, the right-hander had an impressive start in the longer format with an impressive century in his debut series in Australia. Virat Kohli keeping it simple remains biggest asset for Indian run-machine

If Kohli was ready to take on the world, the England series at home showed that the right-hander was not. The scores of 19, 14*, 19, 7, 6, 20 and 103 highlight how inconsistent Kohli was. Indeed, the expectations were high from the young batsman who was showing a lot of promise with a flurry of performances in limited-overs. Nonetheless, England had to be credited for being unrelenting with both bat and the ball and not giving India any breathing space in their own den.

Kohli has a reputation of a big-match player . He scored a century in the ICC Cricket World Cup 2015 opener against Pakistan. Kohli hammered as many as 4 centuries in a series wherein he led India for the first time, in Australia in 2014-15. He is the 32nd Test captain for India, but not a single player in that list before him had scored an away double hundred. Kohli not only demolished this norm by scoring 200 at Antigua during the West Indies tour in July 2016, but after a short barren run, he slammed 212 against New Zealand in India s last Test to send ample warning to England. Driven: The Virat Kohli Story Review

Kohli may have been in rich form, but the fact that his scores aren t worth remembering against England, the pressure will be on the Indian skipper. When India toured England in 2014 for a five-Test series, Kohli was primed to make a strong statement with the bat. However, the tour not only marked yet another horrible outing for India, but Kohli was belittled by the English bowlers especially James Anderson who got the ball to move around and one of India s brightest batsman was exposed.

Kohli averaged a poor 13.40 in 5 Tests in England in 2014 wherein India lost 1-3. Kohli never understood the need of tweaking his batting technique to work his way around against a quality bowling line-up. Anderson accounted for Kohli in both the innings in the fourth Test at Southampton and it was only in India s tour of Australia in late 2014, that the 28-year-old piled on a plethora of runs. The reason why he failed in England was because Kohli was not standing at the right place while batting something which he worked around to make heaps of runs in his next away series.

The upcoming five-Test series against England is perhaps going to be the toughest for Kohli and his team, who have shown all signs of ruthless domination home and away. Kohli has hardly lost anything as the leader of the pack. His only blips have come against Australia and in the opening Test of the three-Test series against Sri Lanka in mid 2015. The recent series against West Indies and the three-Tests affair versus New Zealand proved that Kohli and his team are just in the right shape and place to keep going in same direction.

Having said that, England are still not going to be easy to knock over. In Alastair Cook and Joe Root, they have some solid batsmen. Ben Stokes has perhaps been the best all-rounder in Test cricket, and their bowling attack looks promising even though there is no Anderson for a major chunk of the series. England realise that they are weak on spin and their chances of doing better will depend a lot on how much are they able to move the ball around. On their previous India tour in 2012-13, Anderson showed England how to do that, and even though he will be missing, the likes of Stuart Broad, Stokes, Chris Woakes, Jake Ball and Steven Finn will have to repeat a similar performance.

England have been successful in moving the ball, be it the SGs which are used in India or the Kookaburras in Australia. If they get their act together in the spin-department, Kohli and company will have lots to ponder upon. It is not only an important series for India to maintain their lead at the No. 1 spot in Tests but also essential for the Indian captain to fire in all cylinders and set his dismal record against England to rest. 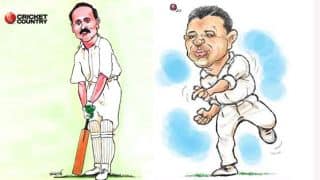