On January 16, 2006, Indian batsmen Virender Sehwag and Rahul Dravid went agonisingly close to breaking a world record and would have got there if not for the former’s extravagance. Jaideep Vaidya travels back to that gloomy day in Lahore which was brightened by Sehwag’s aggression and Dravid’s elegance. 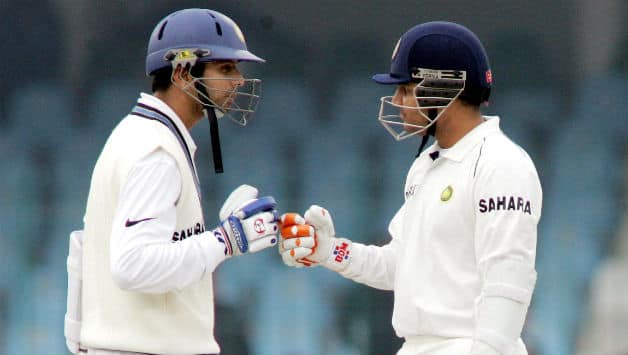 On January 16, 2006, Indian batsmen Virender Sehwag and Rahul Dravid went agonisingly close to breaking a world record and would have got there if not for the former’s extravagance. Jaideep Vaidya travels back to that gloomy day in Lahore which was brightened by Sehwag’s aggression and Dravid’s elegance.

It was possibly the most gloomy and dreary weather you would ever find in a Test match. Pakistan were hosting India for the first of a five-match Test series at the Gaddafi Stadium, Lahore. The pitch was as flat as a pancake and waiting for runs to be milked off it.

Pakistan won the toss and obliged, putting on 679 for six declared in a little more than five sessions at the crease. India came into bat for the last hour or so of Day Two with Virender Sehwag and, to the surprise of many, Rahul Dravid opening the innings.

The Indian captain later admitted that he had decided to open the batting along with Sehwag the night before the match. He said it was a decision made with the best interests of the team in mind, for India did not have another genuine opener apart from Sehwag.

The unlikely duo took stumps on Day Two after putting on 65 runs on the board in 13 overs when the umpires offered light. The next day saw the weather get even gloomier and a princely total of 14 overs were bowled. Sehwag and Dravid, mainly the former, still managed to shoot up the score to 145 for none by the end of play.

Sehwag started Day Four on 96 not out. The world knows that he’s got a penchant for reaching landmarks with a boundary and Danish Kaneria went ahead and bowled him a juicy lolly outside off stump.

The ball had crashed into the cover fence before wicketkeeper Kamran Akmal could yell “Catch it!” The 11th Test hundred, and fifth against Pakistan, was up in 93 deliveries, making it the second fastest Test century by an Indian, after Sunil Gavaskar cracked a ton in 94 balls against the West Indies in October 1983.

Sehwag was in a murderous mood. He was bludgeoning each and every bowler in sight, so much so that you wouldn’t be surprised if the Pakistanis would’ve taken counselling after the match. On one occasion, he stepped down the track and whacked Shoaib Malik to the wide long on fence. Akmal was heard pacifying the bowler from behind the stumps, saying, “Koi baat nahi Malik, koi baat nahi. Shabaash! (No problem, Malik, no problem. Well done!)” And he got many an occasion to do so on that day.

The 250 was up for India in the 50th over with Sehwag exhibiting a classy slice-cut off Mohammad Sami for four. Amazingly, the first six of Sehwag’s and the Indian innings came only in the 55th over when the big guy lofted leg-spinner Kaneria’s wrong’un over the long-on fence. Rahul Dravid said after the match, “Some of the shots he [Virender Sehwag] hit were a joy to watch from the other end” © AFP

The most memorable segment of Sehwag’s innings came when he was on 183 – 17 runs from a second double hundred against Pakistan (he had also scored a triple). Rana Naved-ul-Hasan was the bowler. On the first ball of the over, the medium-pacer pitched it short and wide enough for Sehwag to execute a late jab to the third man fence; the next one, a similar delivery, was dispatched off the backfoot to the cover boundary; Rana changed the angle and came in around the wicket, but, it made no difference to the Nawab of Najafgarh as he cut the widish ball to the backward point fence. The last one that got him to 199 was the best and, possibly, the shot of the day.

Naved came around the wicket and bowled a good length delivery angling across. With minimal foot movement, Sehwag sent the ball packing and racing along to the cover boundary with a solid punch off the backfoot. He had gone from 183 to 199 in four deliveries. In the dressing room, India’s unofficial photographer, Anil Kumble, took off the lens cap off his camera, ready to capture a memorable double hundred.

Everyone around the Gaddafi Stadium expected another bludgeoning drive to the fence, or a heave into the stands, and almost in an anti-climax, Sehwag got there with an upper-cut that rolled along to third man: 200 in 182 balls. It was the second-fastest double century in the history of the game, after Nathan Astle, whose effort against England in 2001-02 came in 153 balls. The partisan Pakistani crowd rose to applaud yet another gem from Sehwag against the home team. Even with the rivalry between the two teams, it was tough not to appreciate this innings.

Dravid, meanwhile, was in the best seat of the house. Going about his role of the anchor at the other end, all he had to do was watch his more flashy partner go about with the scoring. Opening the batting for only the ninth time in a Test, Dravid was as composed as one could get against bowlers of the quality of Shoaib Akhtar and Sami. If Sehwag was brushing away the looming cloud cover with his massive whacks, Dravid was doing so with an array of gorgeous strokes.

Dravid was his usual elegant, wristy self. A major chunk of his 19 boundaries were hit on the leg side – with the favourite areas being midwicket and fine leg. Dravid’s wristy flicks off the pad and sweeps off the spinners were a treat to the purists as he calmly went about his innings. His 128 not out came off 233 balls.

At 370 for none, the duo went past Graeme Smith and Herschelle Gibbs’s 368-run stand which was till then the highest opening wicket partnership against Pakistan. The next record in sight was the big one – Vinoo Mankad and Pankaj Roy’s world record 413 for the opening wicket. At 410 for none, Sehwag was a boundary away from the record and five away from another one. Never before had anyone scored more than 52 boundaries in a Test innings; Sehwag was on 48.

Naved ran in from over the wicket and bowled a short-pitched delivery wide of off stump. Sehwag’s eyes lit up immediately as he went for another trademark upper-cut. See you round, Mankad and Roy. But alas, it wasn’t to be. A restrained cheer went around the Gaddafi Stadium, as Sehwag found the edge and Akmal pocketed the catch. All eleven Pakistani players went up in appeal and umpire Rudi Koertzen’s dreaded left arm went up. After five-and-a-half hours at the crease, Sehwag was gone for 254 and India were 410 for one.

As Sehwag walked back to the pavilion, there wasn’t a hint of repent on his face. Four runs from a world record, did he even know about it? No, he didn’t. “The world record really doesn’t matter,” he told ESPNcricinfo later. “I didn’t know we were close to the record until I came back to the dressing-room.” And even if he had known about it, he wouldn’t have done a thing differently.

As it turned out, India could not add any more runs to their total before the umpires offered light for the umpteenth time. With just a day left and the match still in the second innings, both teams settled for a draw. It was one of the most dull, boring Test matches you would ever come across if viewed academically. But when Sehwag is at the crease, how can anything be boring!

Terming it a “special” innings, Dravid later said he “enjoyed the partnership” with one of the most aggressive batsmen the world has ever produced. “The pace at which Viru [Sehwag] scored was pretty exceptional,” he told ESPNcricinfo. “Some of the shots he hit were a joy to watch from the other end. Even though it was a flat wicket, some of the shots he hit against the spinners were special.”

Dravid refused to blame Sehwag for getting out the way he did, with a world record in sight. Justifying his partner’s style, he said, “Viru plays that way – attacking and positive. He played a similar shot to get from 199 to 200. [A] Lot of times, when people get out, it looks like why did they play that shot [sic], but when he’s on song there is some exceptional batting.”