"While Pune cannot be wished away as a bad dream, India can use it as a template of what not to do. And emerge stronger by imbibing the lessons," - VVS Laxman.

The demolition in Pune was swift and decisive. Seldom, if ever, have we seen an Indian team outclassed in this fashion on home soil, and more so given the form they brought into the first Test against Australia. In saying that, all credit to the Australians. They anointed themselves underdogs for this series, but they played like a champion outfit and reaped the rewards of meticulous preparation, excellent attention to detail and the characteristic Australian spunk and spirit that was stressed in my previous column.

I must profess to disappointment at some of the reactions to India s 333-run defeat. People have openly questioned the temperament, the technique, the attitude and the skill-sets of India s cricketers. While I respect the fact that everyone is entitled to his opinion, I think it is essential not to lose sight of the larger picture. India came into this Test sitting on a 19-match unbeaten streak. They had swept aside New Zealand, England and Bangladesh at home, and had done so on good cricket tracks and with an authority that was befitting their status as the No. 1 Test team in the world. They have not reached the pinnacle by accident; the process was laid out a long time back, and for the last year and a half since the Galle Test defeat in August 2015, India have been invincible.

But all good things invariably must come to an end (albeit temporarily), and so they did in Pune. Agreed, the swiftness of the debacle was astonishing, but it is worth remembering that India had one bad game, they have not and cannot become a poor Test team overnight. This was the perfect example of everything that could go wrong going wrong starting from losing the toss on a surface that was the same for both teams, but far from ideal for Test cricket.

Australia did the basics much better than India did in all departments. They batted with purpose and out of character if the situation demanded, they bowled keeping in mind the vagaries of the pitch, they held their catches outstandingly well, and they were judicious in their use of the DRS. I am sure India will say they did none of these things with the felicity and adroitness that has been their calling card over the last 18 months, which explains why they lost 20 wickets in less than a full day s play.

There are lessons to be learnt for India, and knowing how much pride there is in that dressing-room, I can state with certainty that those lessons will be learnt not just thoroughly, but also quickly. I will put some of the extreme backlash down to the quality of cricket the team has played in recent times and therefore the expectations they have raised, but while the fans are feeling let down, no one will be hurting more than the men who were at the receiving end of that drubbing. I can almost feel the pain of Virat and Anil and the rest of the team. This is not a time for recrimination or finger-pointing. Instead, it is time for introspection, time to figure out what could have been done better and what could have been avoided, and what needs to be done now to turn things around.

Australia were magnificent, make no mistake. They did not go to Dubai to practice at the ICC Academy just as a formality. They came prepared for every eventuality, and while they too must have been surprised at how tamely India capitulated, they will take tremendous pride in having overcome a massive challenge in such overwhelming fashion.

David Warner showcased a facet of his batting that is not seen all too often. By nature an attacking batsman who loves to explode in a flurry of boundaries, he was happy to play the conditions even if it meant putting his natural game in cold storage temporarily and scoring at less than 40 runs for 100 balls faced. Steven Smith produced one of the finest hundreds ever seen on Indian soil, his use of feet exemplary and his choice of deliveries to attack and defend near-impeccable. Agreed, he had his fair share of luck, but to his credit, he made the most of his good fortune. An innings of this nature has elevated his already burgeoning stocks at the highest level, and the confidence he will derive from this century simply cannot be put in words. Matt Renshaw was extremely impressive in his first Test on Indian soil, in conditions he would never have encountered before in a match situation.

Australia showed tremendous adaptability. While they knew that they had to bide their time, they did not go into their shells. They were always positive, even in defence, but at the first hint of shortness in length, they went deep into the crease to cut or pull. Whenever the ball was given a little more air, they used their feet, took calculated risks and hit the ball down the ground in the air or along the carpet, throwing India s spinners off their game.

One of the things about a raging turner is that the margin for error is miniscule. It looks dramatic from far, watching the ball exploding and turning a mile, but often, it is the one that goes straight through or the one that turns just a little bit that has the batsman s name on it. As well as Ashwin and Jadeja bowled, they were put to shade in the conditions on offer by Steve O Keefe and Nathan Lyon. Without any disrespect, pitches such as this make even good bowlers look threatening; O Keefe made the most of the assistance by picking up 12 wickets, hitting the right spots, bowling at the right pace and feeding off the indecision in the minds of the Indian batsmen.

The game was won and lost when India lost their last 7 wickets for 11 runs in the first innings to concede a deficit of more than 150. The dismissal that triggered the slump was that of KL Rahul s, and without being too critical of the young man, he should have shown greater situational awareness. There is a thin line between being positive and reckless. India were mounting a strong reply to Australia s 260 and Rahul seemed in for the long haul when he charged and picked out the fielder at long-off. It was a poor stroke simply because it was not a percentage stroke under the circumstances. There was a long-off in place as well as a deep extra-cover, and with the ball turning, unless you were right to the pitch of the ball and therefore in a position to negate any turn, the shot was fraught with danger. Rahul went through with the shot even when he was not in any position to do so, and while that was not the stroke that cost India the game, it was one that played a massive part in tilting the balance.

This again brings us to the significance of the set batsman batting deep into the innings. It is never easy for a new batsman to walk in with the ball jumping and turning, and I say that from experience. Once you are set, because the margin for error is so less for the bowlers, it becomes a lot easier to not just survive but also score quickly. That was what Renshaw did in the first innings, and Smith in the second, while Mitchell Starc backed himself and his power to clear the boundary late in the order.

Having done battle so often with Australia, I still cannot speak highly enough of how brilliantly they have come prepared to India. After the tour of Sri Lanka when they were beaten 0-3 last year, Sridharan Sriram spoke to them of the importance of soft hands, of not jabbing at the ball and waiting for it to come to them instead, and of the need to pull out the sweep stroke. Now, Sriram may not have the greatest international record but he has been a fantastic First-Class player who finished his career with an average in excess of 50. Australia s batsmen, several of them already legends-in-the-making in the international arena, quickly bought into his line of thought, without ego or reservations. Their desire to learn and improve has always been strong, and their batting in Pune was another example of why they are always dangerous opponents, no matter what the names on paper might be.

That this is a four-Test series is to India s advantage. There is plenty of time to bounce back from the Pune defeat, and especially given the quality that is at Virat’s disposal. It is debatable if there will be a Pune-type pitch for the rest of the series, and I strongly advocate that there should not be, because a surface of that nature pretty much balances out the gulf between the sides. While Pune cannot be wished away as a bad dream, India can use it as a template of what not to do. And emerge stronger by imbibing the lessons. Not for a moment do I have any doubt about my Indian team s capability to win this series even from this position. 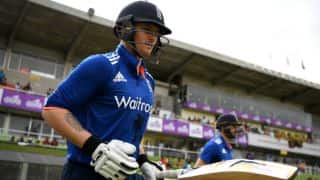 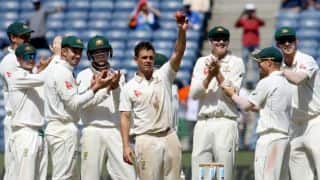