Chris Gayle’s comeback was spectacular – albeit marred by a West Indian defeat. Alastair Cook, an opener of a different kind, stole the show in the second One-Day International at The Oval. Nishad Pai Vaidya unravels the contrasting approaches of the two openers. If sixes are Chris Gayle’s (left) favoured digits, Alastair Cook has the ability to start with boundaries © Getty Images

Chris Gayle’s comeback was spectacular – albeit marred by a West Indian defeat. Alastair Cook, an opener of a different kind, stole the show in the second One-Day International at The Oval. Nishad Pai Vaidya unravels the contrasting approaches of the two openers.

While Chris Gayle mauled bowling attacks in numerous T20 leagues around the world, the bowlers on the international circuit would have breathed a sigh of relief. Having been spared from the carnage for over a year, Gayle’s return to the West Indian colours would now give them nightmares. The signs are ominous. Gayle took no time to unleash his fury with an idiosyncratic knock of 53 against England at The Oval. As is the general consensus, it was a glimpse of what the West Indies had missed for over a year.

The sight of Gayle charging down to a fast-bowler is a fearsome sight for any fielding captain. Tim Bresnan bore the brunt of the Gayle juggernaut as he hit him for three sixes in his very first over. The huge hit over mid-wicket was probably the biggest hit one would ever see. Not only did he clear the huge boundaries at The Oval, but managed to hit roof of the tall stand. That stroke was played with the utmost brutality as he charged Tim Bresnan as if he was taking on a spinner. It was reminiscent of the massive six he hit off Brett Lee at the same ground during the ICC World T20 2009.

On international comeback, Gayle scored majority of his runs through sixes. It is almost as if he was inspired by a slogan from the recently-concluded Indian Premier League (IPL); “Why go for four when six is more.” Two off the five sixes he hit were lofted shots down the ground. They weren’t the most powerful shots; it was the timing that sent the ball high and long. Gayle cuts a humongous figure on the field of play; a massive hurdle standing between the bowlers and the stumps.

Gayle doesn’t attack from the word go and follows a traditional notion that has governed opening batting – watch the first few overs. This new-found approach was very evident during the IPL when he would be cautious at the start and tee off later. At The Oval, Gayle got into his stride and started smashing the ball all over once he got his eye in.

Considering the fact that it was a 50-over contest, England must thank their stars that they nipped his progress in the bud. With a number of overs remaining, one can only imagine the carnage Gayle could have inflicted as he switched gears to a much higher pedestal in the later overs. With this studied approach, his best in one-day cricket may be yet to come as he has found the perfect mix of brutal hitting and sensible batting.

Gayle’s sterling show grabbed all the attention and the battle at the other end was pushed into oblivion. Lendl Simmons’ played a painful knock and couldn’t get the ball off the square. The frustration was building and he succumbed to his eagerness to get to the other end. West Indies haven’t had the best openers since the 2011 World Cup and it is only Simmons who has decent numbers. Simmons is a good stroke player and shouldn’t try to be a Gayle. At the same time he shouldn’t leave everything to his partner and try to play his natural game.

Unfortunately for the West Indies, the comeback of their talisman didn’t alter their fortunes. A typical West Indian collapse followed Gayle’s dismissal until Dwayne Bravo and Kieron Pollard took them to a respectable total. While the crowd came to The Oval to witness a Gayle blitzkrieg – a short one, though – they were treated to another classy knock by Alastair Cook. It was an exhibition of two contrasting approaches to opening batting – while one is brutal, the other has a silken touch.

Cook isn’t the prettiest batsmen to watch as he usually nurdles (to use the popular term) his way around. Nevertheless, the Cook who made his One-Day International (ODI) debut in 2006 and the one who took over the reins of captaincy in 2011 are two different batsmen. The former was much more cautious and wasn’t able to push the tempo on a regular basis. However, the rebirth of Cook the ODI batsman has witnessed his strike-rate touching the 90 mark. Some of his knocks have been aggressive and he has essayed strokes which weren’t expected of him in the past.

If sixes are Gayle’s favoured digits, Cook has the ability to start with boundaries. His stroke play through the off-side in particular is a joy to watch be it the cuts or the square drives. He also doesn’t fear going over the leg-side and has started playing slog sweeps to the spinners. Through all that, he has respected his limitations and plays to his strengths. It wouldn’t be fair to expect him to play like Gayle and attempt to clear the ground at the hint of every opportunity.

Cook may be a little watchful early on and then pick up pace, but may not have the steam to cover-up like Gayle. The West Indian can make rapid strides after being very slow initially, whereas Cook may have to struggle if he doesn’t find his rhythm early on. With Gayle in a watchful mood, it is like a ticking time-bomb waiting to explode.

Kevin Pietersen seemed to be the ideal opening partner for Cook as he would take on the opposition while Cook held one end. With Bell coming in at the back of Pietersen’s retirement from limited-overs cricket, England have openers in the same mould. Since, neither of them are dashers, it may create pressure in case they aren’t able to get going. Once they understand each others’ game better; that may not trouble them. The key would be to persist with this partnership. Bell started off with a hundred and Cook has come a long way in ODIs. England shouldn’t chop and change the partnership too many times – something they have done since the end of the 2007 World Cup. 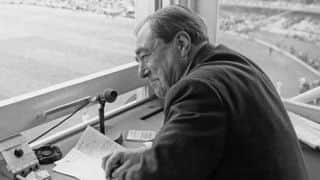