The Barbados wicketkeeper-batsman is yet to fulfill the selector's expectations after making his debut earlier this year.

West Indies are currently gearing up for their tour of Sri Lanka, which begins with the first of the two-Test series on October 14. The touring party features a few new names in its Test squad, among which are Jomel Warrican and Shai Hope. Amit Banerjee takes a look at the latter’s record in his domestic career, as well as his run in the three Tests that he has featured in so far in order to find out his chances of featuring in the playing eleven for the upcoming fixtures.

The West Indies Cricket Board (WICB) have picked a young side for the Test series, named Sobers-Tissera Trophy according to latest reports, that begins with the first of the two matches on October 14. Among the players picked for the Test series are those who are yet to make their international debut (Jomel Warrican), as well as those who have made their first appearances in the past one year, such as Jermaine Blackwood (2014), Rajendra Chandrika, Shane Dowrich and Shai Hope (2015). Let us look further into Hope’s career so far. READ: Jomel Warrican needs to carry domestic brilliance over to international scene

The 21 year-old Bajan wicketkeeper-batsman has played a total of 17 First-Class games for Barbados since making his debut in 2013 in the Regional Four-Day competition. His claim to fame was his double-century in the 2014-15 edition of the domestic tournament against Windward Islands in March earlier this year, the only-double century in the ongoing series, that helped grab the notice of the national selectors and get himself picked for the three-match Test series against England on home soil.

Hope did not make any noticeable impression in the first two seasons of the four-day tournament that he featured in, scoring a total of 96 runs in five appearances in the two seasons. It was the 2014-15 season however, that actually showed what Hope is capable of as a batsman, scoring 628 runs in nine matches at an impressive average of 44.85, slamming two centuries and three fifties in the process. He was initially picked as the Barbados wicketkeeper, a position that he later lost to Dowrich.

Hope made his cherished debut against England in the third and final Test in front of his home crowd at the Kensington Oval. While West Indies went on to win the Test by five wickets and share the series honours with the visitors, Hope did not fulfil his expectations after being sent to open the innings, getting dismissed for 5 and 9 respectively.

He was once again picked to open during the two-Test series against Australia alongside Kraigg Brathwaite, although he failed with the bat once again as he scored a mere 80 runs in the series at a poor average of 20. He was demoted down the order for the second Test, with Rajindra Chandrika taking his place in the second game at Jamaica. Hope’s fortunes with the bat did not improve in the Twenty20 format either, managing just 39 runs at a disastrous average of less than 10 in the Caribbean Premier League (CPL) 2015.

Hope will surely be waiting anxiously for the Sri Lankan series in order to repay the faith that the selectors have had on him so far. For all we know, the tour of Sri Lanka may just be a final warning for him to get back into form before he is faced with the axe. 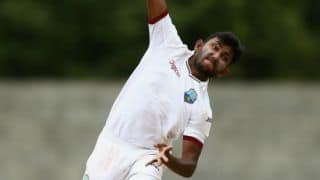