England are set to face the West Indies in third and final One-Day International (ODI) at the Kensington Oval, Bridgetown in Barbados on Thursday.

England are set to face the West Indies in third and final One-Day International (ODI) at the Kensington Oval, Bridgetown in Barbados on Thursday. England looks a lot more confident with a 2-0 lead. This is West Indies’ last chance to make a comeback and draw a consolation from the dead rubber. Meanwhile the mighty guest may not want lose the opportunity of an overseas whitewash. West Indies have failed to make use of the home advantage while England under Eoin Morgan continue to march towards betterment. LIVE Cricket Scorecard: West Indies vs England, 3rd ODI at Barbados

Top order: England have a good batting line-up with Jason Roy and Sam Billings opening the batting in limited-overs in the previous two matches. Both scored crucial fifties in either of the games. However, with Alex Hales back in the squad, there is a chance that Billings may make way for the regular opener. All three contenders are destructive openers, and a good start can only do a world of good for England.

Joe Root will be batting at No.3. His previous knock of unbeaten 90 was a testament to the fact on why he is rated amongst the best in the world. He will look forward to cash-in on the form.

On the other hand, West Indies have Kraigg Brathwaite and Evin Lewis as their opening batsmen. The right-left combination is perfect to face the British bowlers. While Lewis managed to score 21 runs in the first ODI, he could score just 8 runs in the second. Meanwhile Brathwaite was dismissed for 14 runs in the first ODI, but he managed score well in the second match with 42 runs. Kieran Powell bats at No. 3 spot. Powell who returned to the squad after 3 years could not perform as expected was dismissed early in both matches. West Indies should think about replacing him with Shai Hope, who has been able to deliver consistently.

Middle order: Skipper Eoin Morgan bats at No. 4 spot. Morgan is one of the finest limited-overs batsmen and won England the first game. With Jos Buttler at No. 5 and Ben Stokes at No. 6, England have a strong line-up for limited-overs cricket. Both these batsmen are awaiting big knocks in this series and will hope to make the final ODI count.

Jason Mohammed has been brilliant for West Indies at No. 5. He has stepped up when the chips were down. He is the highest run-getter for his side. Jonathan Carter and Jason Holder will bat at No. 6 and No. 7 positions respectively.

Lower order: England have enough depth in their batting. With Moeen Ali, Chris Woakes, Adil Rashid and Liam Plunkett in their ranks, England have long batting line-up and plenty of firepower.

In contrast, West Indies have Ashley Nurse and Devendra Bishoo, who can slog. But they have to depend more on the top and middle-order.

Bowlers: Liam Plunkett has been impressive and has seven wickets from 2 games. Chris Woakes too picked up a four-for in the second game. England also have the luxury of playing with spinners like Adil Rashid and Moeen Ali in the spin friendly conditions of Barbados.

Spinners Nurse and Bishoo are the key bowlers for West Indies. Again these spin bowlers have a fair chance to bowl well on the spin-friendly pitch. The injury of Shanon Gabriel may be a reason for worry for the West Indies. If they pick up Rovman Powell, they will also have depth in batting.

Likely XIs for the third ODI at the Kensington Oval, Bridgetown: 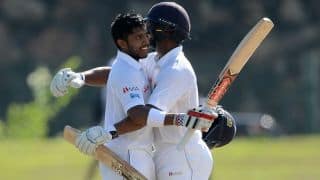