West Indies will hosts South Africa at Guyana for Match 1 of Tri-Series on Friday that also includes Australia.

After three months of T20 cricket, the 50-over format is all set to make its way, as West Indies, South Africa and Australia will battle in West Indies Tri-Nation series 2016. In Match 1 of this tri-series, West Indies will lock horns with South Africa at Guyana’s Providence Stadium. West Indies are reigning high on confidence after their win in ICC World T20 2016. Along with men’s team, women as well as Under-19 team have made this year memorable for the Caribbean nation. The earlier encounter between these teams was at Nagpur in a T20 game, in which West Indies managed to beat South Africa by 3 wickets. South Africa come with an ODI series win against England early this year, while West Indies suffered defate against Sri Lanka. Live Cricket Scorecard: West Indies vs South Africa, Tri-Nation Series 2016, Match 1 at Guyana

While Chris Gayle and Dwayne Bravo miss out on this crucial series, Kieron Pollard and Sunil Narine make a comeback. As for South Africa, Faf du Plessis playing in this game seems unlikely after his injury. However, here are the possible key battles that will be witnessed in tonight’s encounter:

Quinton de Kock vs Jason Holder: Quinton de Kock had good stint in IPL 2016, as he plundered 445 runs at 37.08. On the other hand, Jason Holder’s all-round skills will come handy against the in-form southpaw. He was excellent with the ball in the ODI series against Sri Lanka last year. Given he has the knack of swinging the ball, it will be an uphill climb for de Kock to go all guns blazing.

Hashim Amla vs Jerome Taylor: Amla might had a torrid time in Indian Premier League (IPL) until his 95-run knock. However, he is one of the prolific ODI batsmen of the current generation. He showed his credibility in ODI series against England, as he had a half-century and century to his name. He can equally compliment de Kock as the opening partner when it comes to finding gaps. Taylor, on the other hand, did not get enough game time in ICC World T20 2016. Nonetheless, his ability to stop runs will be handy in the batting Powerplay.

AB de Villiers vs Sunil Narine: Mr. 360 needs to no introduction after a stupendous performance in IPL 2016. He has many records to his name. And one was registered against the West Indies: he scored the fasted 150 in ODIs. Narine, on the other hand, has come into the squad after a while and can provide great impact with his bowling variations. This, undoubtedly, will be the most spectacular battle of the match. ALSO READ: WI vs SA, Tri-Nation Series, Match 1: WI likely XI

Carlos Brathwaite vs Chris Morris: The Caribbean, who lead West Indies to the champion title, can be the crisis man for West Indies this season. The middle-order batter Brathwaite is a surprise package for West Indies with both bat and ball. As for Morris, he has provided the finishing touches in the past for his team. Donning the role of a bowler, he can be perfect with his toe-crushing yorkers. When these all-rounders clash, some fireworks will be expected. 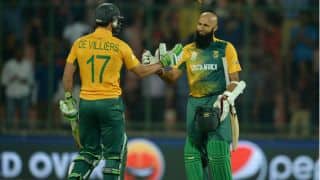 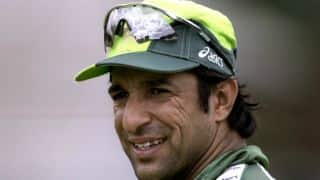