Pakistan’s approach in the fourth and final Test has been remarkable, which in return has put them ranked No.3 in ICC Test ranking.

Pakistan have been an impulsive and an contradictory side in contemporary cricket. Their fortunes may have been in stark contrast when it comes to the white ball but have looked high on confidence with the red leather. Prior to the start of ongoing four-match Test series, one could have effortlessly envisaged and seen England dominating the visitors as they have had reputation of doing so at home. However, Pakistan have rebelled against all the odds and put up a valiant show. Full Cricket Scorecard, England vs Pakistan , 4th Test match

Coming into The Oval Test, England were leading 2-1 but Pakistan turned the tides to level the series, which is not less than a win. it won’t be less than a win for them. Pakistan’s approach in the fourth and final Test has been remarkable, which in return has put them in a position where they find themselves now. Though they lost two back-to-back Tests at Manchester and Birmingham but have fared well than the two big teams who had an awful time when they toured England. ALSO READ: Pakistan script historic win against England; level series at The Oval

India lost the five-match series 3-1 when they toured England in 2014 while Australia slumped to a 3-2 defeat in a five-match series in the 2015 Ashes. Pakistan have adopted a better strategy as compared to that of India and Australia. Pakistan had a better team, a more balanced one, especially the bowling attack, which was too threatening for England to risk dishing out green tops, as that would render results a bit of a lottery. On flatter pitches than the series against India or Australia, Pakistan had a quality leg-spinner to fall back upon.

Pakistan’s pace battery looked threatening, which could well be the reason behind them not playing on doctored green pitches. Pakistan had an armoury of bowlers who could have exploited the green surfaces. Pakistan’s bowling played a massive part behind their success in the English den. Spin-friendly surfaces would not have been a go to option with the presence of Yasir, who was pivotal behind their win at Lord’s. Pakistan retain third position in ICC Test rankings after win against England

Pakistan have consistently managed to break partnerships and chip wickets at key intervals on a regular basis. Another key reason behind their success was the presence of two veterans — Misbah-ul-Haq and Younis Khan. Both of them stepped up and when they fired, Pakistan won the Test. At Lord’s, Misbah stole the show with his ton while Oval was all about Younis’ magnificence. When these men stay at the crease for long, runs start flowing from both the ends. Margin for error reduces from both the ends and risks are not taken aplenty as they bring their experience into play.

Pakistan were also quick in rectifying loopholes and further making it right. The elevation of Asad Shafiq too proved out to be masterstroke after he got a pair at Birmigham. The repository of selector’s faith found form at pivotal time as Shafiq fired a ton at The Oval. Pakistan’s top and middle-order were more consistent than that of India or Australia. Opening the batting with Azhar Ali and Sami Aslam was a testament of their investment in right players, a move that India and Australia struggled with.

Bowling has been Pakistan’s primary weapon, they won the Lord’s Test by banking on it and their bowlers did a good job at Edgbaston and The Oval. Their batsmen were more disciplined in the two games, which they dominated. Pakistan were a side who truly tested England and that is no less than a moral victory. 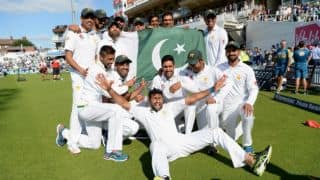