Stuart Broad's comical outing and Netherlands determination scripted one of the memorable T20s of all time.

June 5, 2009. In the inaugural match of the second edition of the ICC World Twenty20, Netherlands pulled off an epic upset by clinching a last-ball win against England. Arunabha Sengupta recalls the game and the spine chilling last over full of mishaps bowled by Stuart Broad.

In the lowlands, it was just another day. Yes, a day that ended with many a lip parted in smiles — but that had more to do with the relief of the end of the workweek.

That Friday, with cheery notes of “Fijn Weekend”, the Dutchmen made for their homes, to the beaches, to the Heineken splashing watering holes, to the solace of Paradiso or to browse at de Boekenmarkt op Het Spui.

Not many of them knew that across the North Sea, less than 400 km away, at the Lord’s cricket ground, eleven of their countrymen were busy making history — of course helped in no small measure by an Englishman by the name of Stuart Broad.

Within the course of another year, the entire country was going to dress up in orange, assemble in their throngs of thousands in the Museumplein, to watch live matches on the giant screens. The pubs would offer free beer for every Dutch goal as the national team made their way through the rounds to meet Spain in the final of the Football World Cup. But, there was no such reaction to the second ICC World T20. Few Dutchmen saw the incredible moment when Ryan ten Doeschate leapt for the skies while Stuart Broad sunk to the ground.

Curiously, Holland had reached the final in the football World Cup before, in 1974, when they were stopped by Franz Beckenbauer ‘s German side. What the Netherlands cricket team achieved at the Mecca of cricket that day was unprecedented.

The miracle did not look likely when the first match of the 2009 World Cup got underway. Atrocious London weather had played havoc with the opening ceremony, and Alesha Dixon’s performance had been washed away by the rain. When the match finally started, Ravi Bopara and Luke Wright made it look like a three hour walk in the park for the hosts. It would not be stretching it too far to say that they toyed with the bowling as 100 came up in exactly 11 overs. The orange brigade looked certain to wilt away in front of a towering target.

But, when came the hour the man was not there to come forth. Kevin Pietersen had been sidelined with Achilles problems. No one else seemed geared to trigger the explosive burst from such an excellent launch. The soaring run rate provided by Wright’s 49-ball 71 and Bopara’s 34 ball 46 were dragged down by the measly 35 managed together by the remaining batsmen off 37 balls.

The Netherlands bowlers stuck to their task without falling apart under the assault of the openers. Owais Shah and Eoin Morgan scratched around during their brief stints at the wicket and Rob Key looked distinctly like a confused fish out of water at the unfamiliar No. 6 position. Even while standing on the secure platform set up by the openers, the batsmen could not clear boundary even once. The last nine overs got the hosts just 62. England ended at 162 for 5, the spectacular early spark fizzling out even as the eyes turned skyward in anticipation of grand fireworks.

Yet, even with the reasonable target, not many gave the minnows much of a chance. An asking rate over eight against an attack comprising of Jimmy Anderson, Ryan Sidebottom and Stuart Broad, was not really the easiest of tasks.

And an upset looked the furthest from the cards when Anderson’s fifth ball rose a bit too much, and Alex Kervezee’s pull went steepling into the heavens. Broad at mid-on waited under it for an eternity before pouching it. At two for one, things were pretty much going according to the anticipated script. But the early portents were deceitful. The contest would turn even, and Broad’s catching would turn farcical.

Off the very next over, Darron Reekers pulled Sidebottom with a stroke that reverberated around the stands. The ball sailed over midwicket into the crowd. When Anderson pitched short in the next over, Reekers responded with what seemed to be a half-hearted waft, and off it zoomed away for another six. The Englishmen had not managed an over-boundary in their entire knock and here was a Dutch batsman with two sixes off his first eight balls.

It was, however, too good to last. Reekers went for a third pull, this time off Broad and hit it down the throat of Shah. Once again, after a brief brush with the miracle, sanity seemed to have returned to the middle.

Not so, according to Tom de Grooth. Three-and-a-half years ago, this whimsical talent had been branded as ‘prone to be happy with mediocrity’. Now, he started with a blistering square cut for four. And when he teed off from his crease, dispatching Broad straight over his head into the crowd, there was nothing mediocre about it. The sixth over yielded 16 and the Associate Members were back in the race.

Broad was used to humiliation in a T20I World Cup. Yuvraj Singh had slammed him for six sixes in the earlier edition. But this was proving to be even worse – more comical.

De Grooth continued in the same vein. Debutant Adil Rashid was reverse swept for four. But at 66, Bas Zuiderent stepped out to a classical looping leg break from Rashid and was stumped.

Yet, as it would be throughout the innings, the wicket was just another minor bump. Peter Borren now walked out and pulled the first ball he faced from Rashid imperiously over mid-wicket for four. The chase was on.

Finally England captain Collingwood restored balance by having de Grooth caught at mid-off from a leading edge. The entertaining innings amounted to 49 from just 30 deliveries. A mere 47 remained to be scored from 42.

Wickets fell. Borren top edged a pull and Shah ran around to take it at short fine-leg. Daan van Bunge drove powerfully, hard and high through the covers, and the ball lodged in the crook of the elbow of Wright at the edge of the boundary. However, the runs refused to be checked and with two overs to go Netherlands required 17 with 4 wickets in hand. Ten Doeschate, the experienced professional for Essex, proving a much better man to come in at No. 6 than Robert Key.

And in the penultimate over, this star of Netherlands sliced a drive off Sidebottom. The ball flew towards the extra cover boundary, and Eoin Morgan flew to get to it. At full stretch in the air, the outstretched hand of the Irishman parried it and over the ropes it trickled. Fortune faithfully stuck by the unfancied side. Edgar Schiferli scampered two leg-byes and essayed a forehand cross court style biff past cover for another two. The equation was down to 7 off the final over. Drops of rain were getting steadily heavier. It had boiled down to a wet and wild thriller.

And along came Broad, round the wicket, striving to the limit, bowling with all the cunning that he could muster, perhaps spending himself too much with the delivery. Perhaps that is why he was found to being a veritable daze once the ball left his hands. One after the other, the superbly bowled balls came back to him, and he fumbled, clutched, groped and overthrew.

Ten Doeschate struck the first ball hard, and it only trickled to the off side within reach of Broad. The desperate batsmen sprinted across, and Broad, as the Englishmen had already done thrice that night, missed the stumps with his throw.

And now came the most dramatic moment of the day. Schiferli made room and flung his willow with the noble aim of piercing the covers. The ball trickled back to Broad yet again. The batsmen darted across. Broad picked up and this time did not risk throwing. He flung himself, Jonty Rhodes style, trying to knock the stumps down. But somewhere during his flight his hand struck the ground. The ball rolled away and the stumps were struck by the empty hand. The desperate dive of Schiferli was short. The decision was referred. Schiferli sat clutching the shoulder which had been rammed into the ground in the last-moment lunge for the crease. The players waited in the rain. And the correct verdict was displayed. Schiferli stayed on regardless of the boos that greeted the decision.

In ran Broad again, producing a dipping full toss. Ten Doeschate tried to hit it into the orbit. It went almost as high, but only along the vertical plane. Broad, having induced the mishit, now moved under the catch, fumbled, juggled and finally dropped the sitter. The batsmen crossed and 4 remained to be scored off 3.

Broad was used to humiliation in a T20I World Cup. Yuvraj Singh had slammed him for six sixes in the earlier edition. But this was proving to be even worse — more comical. Worse was to come.

Schiferli waited with his aching shoulder as Broad ran in again. The attempted swish did not connect, but the batsmen ran anyway. James Foster collected and threw, but ten Doeschate was home.

And now ten Doeschate went for another almighty swipe, and the ball travelled like a bullet to mid-on. Nerves remained taut, at the breaking point, as the batsmen crossed again. 2 runs were now required off the final ball.

Foster walked up to the stumps, perhaps unwilling to risk another bye run to the keeper. And then he walked back again, perhaps worried about a missed edge running away. Anderson spoke to Broad at length. Schiferli looked around the field, eyeing the spots.

And in came the tall English paceman. The ball was once again perfectly pitched. The attempted club down the ground went straight back to the bowler. Broad fielded it as he followed through. And the batsmen were off their blocks in a flash.

Now, with all the time in the world, with three stumps tantalisingly close at hand, Broad shied. And he missed again. The sprinting batsmen reached the other ends and turned back as the ball made its way to the great open spaces in the outfield. The quick strides of ten Doeschate raced across the 22 yards and Netherlands were home. They had beaten England for the very first time.

As Stuart Broad sunk to his knees, hands on his head, perhaps coaxing the earth to open up and swallow him, ten Doeschate leaped and bounded in ecstasy. In came the entire team from the dug-out, in a delighted stream of orange.

The euphoria of the Dutch side could not be dampened by the persistent drizzle.

If Broad had held on to the ball, the match would have gone into the Super Over. However, he went for broke. And as had been the story of the evening for England, he missed. It had been a superbly bowled last over followed up by some of the craziest fielding ever witnessed in cricket.

With this spate of giant killing the tournament was given a spark of life after the miserable showers. The cricketing world, given to rooting for the underdog, rejoiced in the success of The Netherlands. Back home, however, not many in the country of tulips, windmills and bikes got to know of the feat of their national team.

But, it did not matter at that moment. At the home of cricket, eleven Dutchmen did celebrate the evening of triumph in grand style. 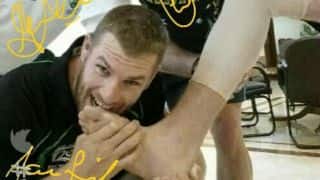