Kulkarni bowled a terrific bouncer, but met with a result he had hardly expected.

On August 24, 1985, Raju Kulkarni bowled a dangerous bouncer at one John Mitchell in Strathmore Union League cricket. This was followed by an unusual chain of events, as Abhishek Mukherjee narrates.

At his prime, in his early 20s, Raju Kulkarni was genuinely quick. There was a time in the mid-1980s when he was considered the fastest in India. He could extract pace off slow tracks and often hurried batsmen with pace. And he had a vicious bouncer.

Kapil Dev gave him first over ahead of himself when Kulkarni made his debut. It was one of two instances when Kapil allowed another fast bowler to bowl first over in a Test innings (Chetan Sharma did the same in the second innings of the Madras tie in the same series). Kulkarni got 3 for 85 on a flat pitch but was under-bowled in the second innings.

He did not exactly take the world by storm in his 3 Tests, but to be fair, he never got the extended run a raw fast bowler often needs. However, at First-Class level he could be a menace; and in club cricket he was obviously too quick for almost anyone.

On that day Brechin were playing Dundee High School Former Pupils, joint winners in 1978. Kulkarni was bowling flat out, and one of his bouncers hit one John Mitchell on the cheek. It didn t go down well with the crowd, for it was Mitchell s official farewell match. Kulkarni was predictably booed, but then, fast bowlers are often subjected to such treatment after hitting batsmen.

Then something incredible happened. Mitchell s wife Lesley stormed on to the ground and grabbed the man who had hit her husband. Kulkarni couldn t obviously undo the blow, but she demanded an apology on the spot.

Whatever the crowd was expecting, it was certainly not this. The Dundee HSFP cricketers were stunned but certainly not as much as the John Mitchell himself. It took about five minutes to convince Lesley Mitchell to leave the ground and let her husband continue.

What about Kulkarni? According to reports, all the young, terrifying fast bowler could utter was a meek I didn t mean to hit him .

Sometimes that is all it takes. 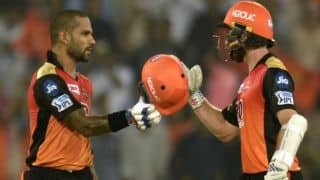