India stuck with the same XI that beat Australia in the last league match, dropping Mithali who scored back-to-back fifties.

India Women left out Mithali Raj, their all-time leading run-getter in T20Is, for their ICC Women’s World Twenty20 semi-final against England Women in Antigua on Friday – a decision that has raised eyebrows as the team was beaten by eight wickets to crash out of the tournament following five unbeaten matches in a row before today.

Mithali, the veteran of 85 ODIs which fetched her 2283 runs at 37.42 with 17 fifties, scored 56 and 51 in India’s wins over Pakistan Women and Ireland Women before she was rested for the last league match against Australia Women, which India won by 48 runs to top their group. Those were her only two innings in the three games she got, so it was widely surmised that the team management, under coach Ramesh Powar, had taken the decision to rest the 35-year-old for the semi-final.

However, at the toss on Friday, when India captain Harmanpreet Kaur read out the team sheet, Mithali’s name was missing. India had decided to retain the same XI which defeated Australia in Guyana five days earlier.

“It’s not about not selecting Mithali, it’s about keeping a winning combination,” said Harmanpreet at the toss.

On the day, India were bowled out for 112 in 19.3 overs to exit the World T20 with an eight-wicket loss to England. The top four got into double-figures but the best score was Smriti Mandhana’s 34 before India surrendered their last eight wickets for 23 runs in a stunning collapse. Taniya Bhatia (11), Mandhana (34), Jemimah Rodrigues (26) and Harmanpreet (16) got starts but could not capitalise, and then the innings gave way in a series of single-digit scores.

Sanjay Manjrekar identified the decision to keep out Mithali as a big factor in India’s defeat.

India paid the price for two mistakes. One in planning, by dropping Mithali on this pitch. The other in execution, by rushing down the pitch to muscle the ball in front of the pitch on a very slow pitch.#ICCWWT20

It s not a pitch where you can hit through the line and fetch boundaries. Mithali Raj would have been ideal on this pitch. Wrong move by India to drop Mithali. But India still good enough to beat ENG.#ICCWWT20

I’ve been saying for a while the Mithali Raj should be batting in the middle order in T20Is for India, not opening. Ramesh Powar has gone a step further today, leaving her out altogether, and continuing to be bold.

Here’s what Twitter was buzzing about regarding Mithali’s absence from India’s XI:

Still gobsmacked that Mithali Raj isn t playing for India in this semi. Big call. If it comes off it will be hailed as a master stroke. If not… #wt20 #WatchThis

If India can go in without Mithali Raj, this must be twice as good a batting side as any in the world!!! What is the story there?

Has anyone asked Ramesh Powar in Marathi, VEDA Zhala Haay Kaay? Excuse this poor pun but Veda over #MithaliRaj in a World Cup Semi?! #INDvENG #ICCWomensWorldT20

India have mucked this up. Should have played Mithali Raj. A pitch like this needed a calm head. #WCT20

All eyes on Mithali Raj now… her legacy has been quashed now. And with this defeat, many will question the wisdom of leaving her out. What will Mithali say now? Or will she quietly have her way? It will be interesting. 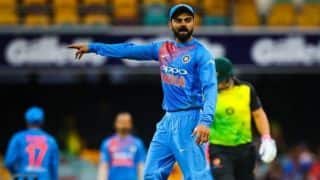