Bangladesh have produced left-arm spinners in plenty, and on April 7, 2007 at Georgetown, three of them got together to strangle South Africa to submission. Abhishek Mukherjee recollects a major ICC World Cup 2007 upset.

Bangladesh had started ICC World Cup 2007 on a high, dishing out a 5-wicket defeat to India at Queen s Park Oval, which eventually led to the latter being knocked out of the tournament (Ireland did the same to Pakistan at Sabina Park the same day). However, rude shocks awaited Bangladesh in the Super Eights: they started off the second round with humiliating defeats against Australia (by 10 wickets) and against New Zealand (by 9 wickets), both at North Sound.

Thus, when they met the heavyweight South Africans for their third Super Eights encounter at Providence, few gave them a real chance. The Proteas had survived a Lasith Malinga scare to scrape through by one wicket and beat Ireland convincingly, both at Providence. Almost nobody placed their money on Bangladesh.

The only previous World Cup encounter between the teams (at Bloemfontein in 2003) had resulted in a 10-wicket humiliation for Bangladesh. After Shaun Pollock and Makhaya Ntini skittled them out for 108, Gary Kirsten and Herschelle Gibbs romped home in only 12 overs. Things did not look too bright for Bangladesh.

There were clouds hovering in the sky, Javed Omar and Tamim Iqbal got Bangladesh off to a 42-run stand before they were hit by Andre Nel. He dismissed dismiss Omar, Habibul Bashar, and Tamim in a short burst while Jacques Kallis provided support at the other end, dismissing Shakib Al Hasan. The scorecard read a sorry 84 for 4 after 23.4 overs.

Then they ran into a rampant Ashraful. Consistency was never Ashraful s key, but when he got going, he was almost impossible to stop. One of the most destructive batsmen on his day, Ashraful had dominated bowlers across opposition; South Africa were unfortunate to cross his path the day he chose to deliver.

Support came at the other end from Aftab Ahmed. Ashraful began with Kallis, hooking and driving him for consecutive fours. He dismissed Kallis again over mid-wicket again; Aftab responded with two sixes in three balls from Justin Kemp before he holed out to sweeper-cover at Ntini.

Ashraful lost Mushfiqur Rahim early as well, but launched into Ntini: he hit him over his head for four; shuffled across to scoop him over fine-leg for four more; slogged one over cover for a brace; and cut furiously for another four. Ntini fell apart, but Smith kept him on.

Mashrafe Mortaza rose to the challenge: he drove and flicked Nel for two boundaries, and when Smith persisted with Ntini, Mortaza hit him over his head into the stands, and followed up with a boundary past mid-wicket. A helpless Smith summoned Charl Langeveldt: Ashraful went on one knee for a square-drive, and almost immediately scooped one from outside off over fine-leg s head. As if that was not enough, he swept Nel for four.

He eventually became Nel s fifth wicket when he tried one scoop too many. Surprisingly, he did not notice Langeveldt waiting at long-leg. He eventually fell for a 84-ball 87 as Bangladesh finished on 251 for 8. To make things worse, Chris Broad docked 10 per cent of Smith s match fees for a slow over-rate, and Gibbs, having pulled a calf, could not field towards the end.

There is a saying that if you knock at a door in Bangladesh, the probability of a left-arm spinner opening the door is very high. On this occasion they had three of them probably three of the finest in the history of the nation: Mohammad Rafique, the first Bangladeshi to 100 Test wickets; Abdur Razzak, the first Bangladeshi to 200 ODI wickets; and Shakib, a kid of 20, who would later emerge as the greatest cricketer in the history of Bangladesh cricket.

Mortaza swung the ball in the air, as did Rasel, who bowled so slow that Mushfiqur stood up to the stumps. Smith got off to a cautious start, only to be stopped on his tracks by Syed Rasel. Then came the big wicket: Rasel bowled slow, straight on the off-stump; trying to steer, Smith missed the ball completely, and the ball knocked his off-stump.

Out walked Kallis, perhaps with the intention of scoring all the runs by himself. He stepped out against Rasel, flung his bat at anything pitched outside off, and runs suddenly came in a flurry. With AB de Villiers rotating the strike, South Africa cruised along, reaching 62 for 1 in 15 overs.

Bashar had replaced Mortaza with Razzak, but kept Rasel going. It turned out to be a masterstroke, as Kallis, trying to play one stroke too many; deceived by lack of pace, he could only hit to mid-on, where a leaping Tamim caught him.

At the other end, Razzak produced what was perhaps the finest delivery of the day. He gave the ball some extra air, deceiving de Villiers, who probably thought the ball was pitched up further than it actually was; he tried it to steer it to third man at the last moment, but the arm-ball was too good for him. It hit timber.

Bashar brought on Rafique, and the pair, bowling in tandem, choked Kemp and Ashwell Prince, both new to the crease. Prince (whose jersey famously had 5+0 typed on it as a respect to Hansie Cronje, who always used the number 5) eventually tried to push one to mid-on, but the inside edge meant it went towards mid-wicket. He still went for the run, but Aftab s throw found him short of the mark. Bangladesh had out 3 for 4 in 4.2 overs.

Mark Boucher tried a resurrection of sorts, thwacking Shakib over extra-cover into the stands, but hit the next straight to Rasel at long-off. Gibbs finally arrived (Prince stayed back as his runner), but the batsmen had crossed; Kemp tried to push the next ball back. Shakib, full of the exuberance of youth, flung himself across towards Prince, made the catch look ridiculously easy, and eventually emerged from between Prince s legs.

The asking rate had already mounted to above 7, and Gibbs and Pollock, the last established pair, tried their best to cut it down; Gibbs punched Shakib for four and hit him into the stands over long-on. They kept the singles coming, and with 123 required off the last 15 overs, South Africa looked good for the final onslaught.

There were mis-fields, overthrows, and Gibbs and Pollock kept continuing amidst all the pandemonium. Then Pollock pushed Mortaza to mid-off and took on Tamim s arm; it turned out to be a blunder, as the direct hit found him short of the crease. Almost immediately Nel hit one back to Rafique.

South Africa were 8 down and the run rate kept going up steadily, but for some reason Gibbs decided not to go for the kill. Unfortunately for him, the Bangladeshis kept taking the pace off the ball, making it extremely difficult for Gibbs (more so, Langeveldt) to accelerate off them.

Langeveldt was eventually trapped in front of the stumps by Razzak. Ntini, of all people, hit Mortaza for four and Gibbs a six (which also brought up his fifty), but Razzak found Ntini’s leading edge as he tried to play across the line, towards mid-wicket. The catch ballooned to a running Mortaza at extra-cover, and Bangladesh, staying up the night thousands of miles away to witness history, erupted.

– Bangladesh were knocked out at Super Eights. South Africa came fourth, but were easily defeated by Australia in the semi-final.

– South Africa had their revenge four years later at Mirpur. They scored 284 for 8 before Lonwabo Tsotsobe and Robin Peterson bowled them to a 206-run victory. 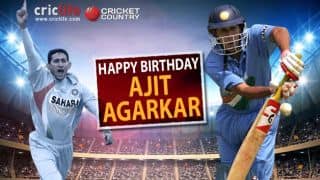