March 11, 2011. The die-hard Bangladesh fans had started leaving the ground in swarms, disappointment etched on their faces. And then Shafiul Islam suddenly discovered his batting mojo. Arunabha Sengupta remembers the day when Bangladesh pipped England by a wafer-thin margin at Chittagong.

Imrul Kayes had led the chase wonderfully well.  The Chittagong crowd had egged them on. After a disastrous collapse to 58 all out against West Indies just a week earlier, Bangladesh were expected to do little of note. Especially against an England team that had been frequently brilliant in the tournament. However, after the disciplined home bowlers had restricted the English batting to a below average 225, the spectators had caught a whiff of an upset on the cards.

And Imrul had propelled the innings with an intelligent well-paced innings of 60. Tamim Iqbal, the more accomplished of the two Bangladesh openers, had blazed away to 38 off just 26 balls, feasting on some pathetic offerings of James Anderson and Ahmed Shehzad. But it had been Imrul who had given the chase the all-important framework and structure.

Tim Bresnan had dismissed Tamim with one that skidded through. Anderson had somewhat made up for his wayward bowling with a smart run out. And Shahzad too had redeemed himself with an unplayable beauty to bowl Raqibul Hasan. A similar tale of surrender seemed to be on the verge of recurrence, but Imrul had held firm.

Besides, there had been the calming influence of Shakib Al Hasan, the skipper, the man who breathed class into the outfit. With the ball, Shakib had been successful but a trifle expensive. But he had led with plenty of inspired moves, and now batted with a degree of professionalism rare in the country’s measly cricketing history.

By the end of the 30th over, Bangladesh were sitting pretty at 149 for 3. Imrul had just creamed a Ravi Bopara half volley to the cover fence to bring up 1,000 ODI runs. Less than 4 an over were required. The crowd were shouting themselves hoarse.  Drinks were on the field and the country was charged with sparks of excitement.

And then the team staggered through another familiar saga of self-destruction. Imrul turned Paul Collingwood to the deep square leg and raced back for an unnecessary second. Shahzad hurled in the throw and the third umpire pressed the dreaded button. The knock of 60 had come to an end that could have been eminently avoided.

Eyeing opportunity, the experienced England bowlers kept it tight. Mushfiqur Rahim seemed uninterested in scoring a run. Seven hesitant notches were registered in the next 5 overs. Shakib, with pressure mounting, took on Graeme Swann. The ball was well outside the off stump, the sweep was wild, under-edged, and the off stump was struck.

The dismissal of his captain seemed to spur Mushfiqur into action. The very next ball, from Shahzad, was driven fluently to the off-side boundary. And the following delivery was nicked to Matt Prior.  The Bangladesh stumper walked back for a strange innings of 6 off 20 balls.

Swann, wiping the ball assiduously to rid it of the dew, sent down a maiden, with Mohammad Mahmudullah struggling to cope with the variations. And with the first ball of the 39th over, Shahzad removed the off-stump of Naeem Islam. Wickets were tumbling like ninepins, and runs were almost a forgotten feature of the game.

Seven balls followed, three uncertain singles were taken, one of them off an unconvincing edge. And then Swann floated one to Abdur Razzak. The pressure told, the batsman tried to swing it over mid-wicket, the white ball traced a spectacular arc across the dark night sky, and came down just about inside the arena. Bresnan ran full tilt from long on, timed his dive to perfection, and came up with the super catch.

Two balls short of the 40th over, and Bangladesh were 169 for 8. The last 10 overs had brought 20 runs and had taken away 5 wickets. The spectators groaned.  They cursed. They were disgusted. Many got up and joined the long queue out of the stadium. The hopes had been doused by this wet towel of a performance.

Bangladeshi cricket fans are perhaps the most resilient in the world, the most optimistic. Without the sunniest of outlooks, one cannot cheer for a side humiliated without break for more than a decade.  Even these diehards were making their way for the great open spaces outside the stadium where there was peace and quiet and gasps and no rattle of falling wickets at heart-breaking frequency.

They had a reason to be miffed. Their bowlers had stuck to their lines, putting in a thoroughly professional performance. The fielders had been alert, seizing their opportunities. There had been one incredulous move to challenge a decision in favour of Andrew Strauss, when everyone but the Bangladeshis on the field had little doubt that the ball had pitched outside the leg and was going over the stumps. Other than that there had been few lapses.

Prior had taken it easy after a stumping appeal had been turned down, and Mushfiqur had seized on the opportunity by pulling out a stump and getting his wicketkeeping counterpart on his way.  Strauss had been cramped for room by some excellent line and length from Naeem and had been pouched at slip. Ian Bell had chipped one gently to midwicket.

Eoin Morgan and Jonathan Trott had rescued England with a 109-run fourth wicket stand, but some canny bowling changes and strict line and length on a sluggish track had kept the total to a very gettable target.

And now a thoroughly amateurish collapse had all but ended the game in another tale of disappointment. The faces showed frustration and discontent as the fans flocked out of the ground. Swann was bowling with figures of 2 for 26 in 9 overs, almost unplayable in spite of his struggles with the dew. Mahmudullah was known to be good with the bat, but Shafiul Islam had a career batting average of 5.40 with a highest of 16. The end seemed too near for comfort.

And then there was light

And then they paused. The returning steps halted and harked at applause. Was it another wicket? The heart wanted to believe in better things, but the head told them otherwise.

For once the heart prevailed. Mahmudullah had reverse-swept Swann for four. Two balls later, Shafiul Islam repeated it, sending the offie over cover for another boundary.

The spectators wavered, vacillated. Again their heads told them to keep walking, their hearts wanted them to stay.

And Swann sauntered in to send down the last ball of his spell. Shafiul stood there and swung it over long-on for six. The decision was made. The ones who had not yet left the amphitheatre remained there till the end.  The support, having lost much of its voice, now erupted full throttle.  Another 39 were needed from 48 balls, and the 2 wickets that remained promised to fight for it.

It was not going to be easy. Shahzad ran in to bowl an excellent final over. Two came off it. Anderson, having a rather ordinary day, produced a tidy over that produced three. Bresnan took over to bowl a maiden, with one leg bye coming from it. The last 5 overs were left with 33 to get.  And it was going to be the batting Powerplay, a rather novel concept plenty of teams had struggled with in the tournament.

And now Anderson provided the crucial gift that gave the hosts the upper hand. He started his new over, with most of the field up in the circle, and sent it way down the leg side. Prior’s dive was futile, and it skidded away fine for five wides. The equation was back in favour of the Bangladeshis.

The Lancastrian continued to spray it around. All the two late order batsmen needed to do was keep pushing for singles. There was another wayward wide, and if the last ball had not hastened off the pads else it would have been called yet again. Eleven resulted from the over.

And then Bresnan erred. First in line, the short delivery sent screaming to the third-man fence by Shafiul’s flaying bat. Then he got the length wrong, and full toss raced past point. The first 2 overs of the Powerplay had got them 21. The equation was down to 12 from 18.

Anderson ran in again, and Mahmudullah was calm, cool, collected, clipping it away for a single, getting Shafiul back on strike. The ball was pitched up and the fast bowler swung his willow. It crashed past the bowler and raced away straight to the bottom of the sight screen. The 50 of the stand was up in quick time, Shafiul 23, Mahmudullah 16, the rest of them the generosity of the English bowlers.

The corking chase came to its successful end in the next over. Bresnan pitched up, and Mahmudullah struck it cleanly past covers. And then he stood with his arms aloft, Shafiul running towards him in unrestrained glee. The hosts were home with one full over to spare. The Bangladeshi team came streaming into the ground.

As many as 23 runs were given away in wides, and considering the modest score on board that was a significant percentage of the runs. Anderson was erratic and less than mediocre, while Shahzad, before his brilliant second coming, had been rather unimpressive. But, all that could take nothing away from Mahmudullah and Shafiul, with their incredible 58 run stand from 56 balls.

The stands were alive with passion, kindled into frenzy by the win.  So was the country, rejoicing till daybreak, a land with little cricketing achievement but whose fans could be as demanding as their Indian and Pakistani counterparts. It was a victory the team needed, the nation wanted and each and everyone savoured.

Man of the Match: Imrul Kayes. 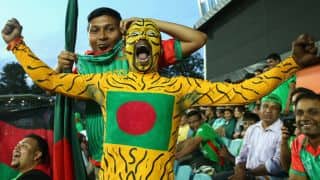