India outplayed an overconfident England team to reach the final of the Prudential World Cup.

In the build-up to the 2019 ICC Cricket World Cup, CricketCountry brings to you the most memorable moments and matches from the Cricket World Cup right from its first edition, way back in 1975. With 86 days to go, in our latest World Cup Countdown, we recall how India outplayed an overconfident England team to reach the final of the Prudential World Cup.

It would be wrong to say that the first few overs went according to the script. True, England expected to win with ease. After Bob Willis had won the toss, their openers put on 69 at more than 4 an over – a fantastic platform considering the era. Yet, no script in the world would have had Chris Tavare scoring at a faster clip than Graeme Fowler, and eventually David Gower, Mike Gatting and Allan Lamb. That was perhaps the first indication that something was wrong as indeed there was.

The wicket was slow, and not at all ideal for stroke-play. Kapil Dev s pace could not make an impression with the new ball. During a brief initial period, strokes were made and the ball travelled across to the outfield. And as soon the slower bowlers came along, all the action stopped. Runs trickled down to near standstill. It says a lot when we consider that 7 of the 12 boundaries of the innings were struck by the two openers, 4 of them by Tavare.

It was the duo of Mohinder Amarnath and Kirti Azad who choked the scoring. One was the gentlest of gentle medium-pacers. The other brisk, but only in terms of the traditional off-spinner. The two bottled up the runs, plugging every sign and symptom of strokes, till finally the English batting imploded into insignificance. By the end of the innings, the twist in the anticipated tale had already taken place with half the story yet unfold. As for the plot, England had lost it midway through their innings.

A study in contrasts

And to think the forecast had been completely different.

The hosts had been in sparkling form, riding the crest of confidence. They had won five of their six group matches and in the other, New Zealand had squeezed home by two wickets with one ball to spare. Four years ago they had been stopped in the title round by the brilliance of Viv Richards and Collis King. They did not want an encore. The minds were already focused on the final on Saturday, devising tactics to stop the West Indian batsmen and fast bowlers. They just needed to sweep past the unfancied opponents who had already gone way beyond the wildest dreams of their countrymen.

Yes, very few of the most die-hard Indian fans had anticipated a place in the semi-finals. In two previous World Cups, India had won one solitary match against the lowly East Africans, way back in 1975. However, during the course of the past two weeks had started to believe in the impossible. They had learnt not to give up.

The promising England start notwithstanding, the Indians stuck to their plans. The medium-pacers plodded on, bowling an impeccable line. Roger Binny got the ball to swing away, and Tavare edged.

Binny got Fowler too, the stumps rattled after the southpaw was beaten by the movement. And then it was over to the combination of Amarnath and Azad.

The balls came at an almost comatose pace off the sluggish surface. The English middle-order, packed with some splendid stroke-players, were suffocated to death. The boundaries seemed far, the fielders too many and the overs were run through at a quick rate. Soon a sense of desperation tinged the air.

Amarnath moved it away off the seam and David Gower followed it. Behind the wicket an ebullient Syed Kirmani flung himself to bring off a superb catch.

A frustrated Lamb, unable to get Azad off the square, tried to scramble a single to short fine leg and Yashpal Sharma s splendid throw caught him short of his ground.

Amarnath, that innocuous trundler, who seemed to stop on his way, who looked as if he would never make it to the bowling crease. The same Amarnath now produced an unplayable delivery. Pitching on the off, it cut through Mike Gattingand took his leg-stump.

Even Ian Botham s genius could not break the shackles. He struggled for almost half an hour, trying everything including the reverse-sweep. Yet all he could forage were 6 measly runs. And finally he misjudged the bounce of a shorter one from Azad, cut over it and was bowled, after a 26-ball tale of discomfort.

Azad finished with 1 for 28 from his quota of 12 overs, Amarnath with 2 for 27. The 24 overs from the fifth and sixth bowlers had put India on top. It was an inspired move. Azad had bowled just 2 overs in the previous match. Kapil, never hailed for his gift of strategy, could not have planned it better. And now, with the tail in, he came back and picked up three quick wickets. It was only some urgent improvisations of Graham Dilley, aided by a productive edge of his bat, which enabled England reach 213.

England were no longer thinking about the big match on Saturday. Challenges had been thrown up from unlikely quarters, and they had turned well-nigh insurmountable. The wicket was not really ideal for the pace of Willis, Graham Dilley and Ian Botham. In fact, as Wisden observed, it was a pitch similar to those on which India are so hard to beat at home.

Sunil Gavaskar, who would end the tournament with an average of 9.83, at the unusual position of second from the bottom in the Indian batting table, now enjoyed the only decent start he would have in the two weeks. He stroked his way to 25 before edging one from Paul Allott. But 46 was the best opening partnership India would achieve in the tournament, and it could not have come at a better moment. Four runs later Krishnamachari Srikkanth unnecessarily skied Botham to mid-on. But, the approach of the middle-order was a demonstration of clinical professionalism.

Amarnath and Yashpal steadied the innings. Runs came at a slow, steady rate. The two picked the gaps and ran hard. It was this 92-run partnership that sucked every remaining ounce of hope away from the English hearts. Both the batsmen opened up only when the ship was steady, the seas calm and the land in sight. Amaranth lofted off-spinner Vic Marks for over the sight-screen. But the man who was exceptional was Yashpal. One of the more unsung of the World Cup heroes, he was at his gutsiest best during the innings, and played a couple of audacious strokes which took the remaining wind out of the English sail. The first was a straight six off Allott, and the second the shot of the day. Bob Willis bounded in off his long winding run, and bowled on the middle stump. Yashpal moved across towards the off and disdainfully dispatched the great England fast bowler for six over square-leg.

It took a spectacular throw from Allott to end the partnership, catching Amarnath short of his ground for 46. In came Sandeep Patil. And for some obscure reason, back came Bob Willis.

The previous summer Patil had creamed 24 off a Willis over in a Test on the same ground. And now he feasted on his bowling yet again. The field was threaded with boundaries as the rate increased in the home stretch. Yashpal fell for 61, a heave spiralling to fine third man. Allott, once again demonstrating his brilliance in the outfield, ran full steam and clutched it after a dive. But by then only nine remained to score.

A two struck by Patil to deep cover levelled the scores, and a multitude of Indian supporters broke into the field from the leg-side stands, the impatience of celebration prompting them to conclude that the game was over. It took a while to clear the ground, and as the last manoeuvre of marshalling his field, Willis called all his men over to the off-side. With five-and-a-half overs to go, it was not a ploy to stop the last single, but a way safe passage to the pavilion situated in extra cover as the spectators invaded from the leg side.

Willis ran in again, and Patil, smile on his face, prepared to face. As soon as he connected, batsmen, bowler and fielders ran towards deep extra-cover, a sight seldom seen before or since. It was a fine edge that ended the match, bringing up Patil s half-century in 32 balls, and taking India into the finals. But, for the moment the players were more concerned with getting to the safety of the dressing room.

Indian bowlers had kept an excellent line, the fielders had been keen on the field and the batting strategy had been executed like the moves on a chess board. There was disbelief on the English faces, a sense of unreality. The unnoticed and unheralded team under the young captain had emerged as the dark horse.

The journey to the final had been exhilarating, especially due to the delights of unforeseen surprise. Another inconceivable step had been taken and the limits of the dreams had been stretched out to include the impossible. 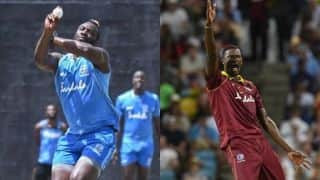 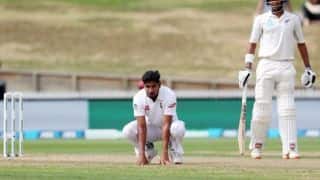