Martin Snedden reached a low against England at The Oval in 1983, being the first bowler to concede a hundred runs in an ODI.

In the build-up to the 2019 ICC Cricket World Cup, CricketCountry brings to you the most memorable moments and matches from the Cricket World Cup right from its first edition, way back in 1975. With 89 days to go, in our latest World Cup Countdown, we recall how during in the 1983 edition, New Zealand‘s Martin Snedden reached a low against England at The Oval on June 9, 1983, being the first bowler to concede a hundred runs in an ODI, albeit off 12 overs.

In this era of Twenty20 cricket, it is almost unthinkable that there was an era when bowlers seldom went past six an over; in the first three World Cups, where every match consisted of 60 overs a side, no team had crossed 340. For the same reason, nobody thought a bowler would concede a hundred runs in an innings, though he was allowed to bowl 12 overs a match in the first three World Cups. Lance Cairns (11-0-84-0) had conceded the most runs in an ODI till then. (READ: Winston Davis bags ODI’s first seven-wicket-haul)

The third World Cup, in 1983, started off at The Oval with Bob Willis opting to bat. Graeme Fowler fell cheaply, and Chris Tavare had his usual day at work with a 91-ball 45; David Gower did not get going either, and the onus fell on Allan Lamb and Mike Gatting to take England to a big score. (READ: India snap West Indies’ unbeaten World Cup run)

Both Lamb and Gatting went after the bowling, especially after poor Snedden, adding 115 off a mere 96 balls. Ian Botham joined in the fun, and Lamb eventually brought up his hundred in only 103 balls which was exceptional by the standards of the day. He eventually fell for a 105-ball 102 with 12 fours and 2 sixes.

Ian Gould played a few shots, but the really impactful cameo came from Graham Dilley, who plundered 31 from 14 balls with 4 fours. England finished on 322 for six, and Snedden with 12-1-105-2 (it is to be noted that his spell included a maiden over and dismissed both Lamb and Gatting). Exactly why Geoff Howarth let him bowl his full quota is a bit confusing, given that Jeremy Coney returned figures of 6-1-20-1.

New Zealand never stood a chance after Willis and Dilley reduced them to 31 for 3, and later 62 for 4. A 20-year old Martin Crowe walked out at the fall of the fourth wicket and batted through the innings before playing Dilley back to him and attempting a suicidal single run. He was last out for a 118-ball 97, and the English bowlers shared the wickets as New Zealand lost by 106 runs.

New Zealand were knocked out in the group stage, while England lost to India in the semifinal.

Since Snedden, four others have reached the dubious three-figure mark till before the 2015 World Cup; two of them did it in nine-over spells. 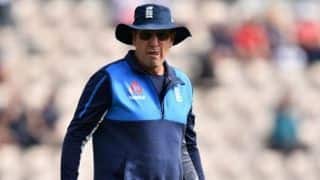